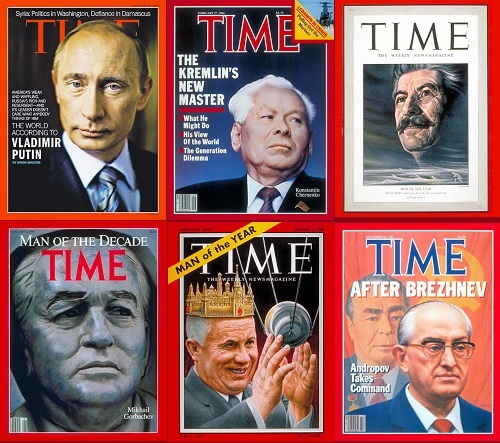 Russian leaders on Time cover
Joseph Stalin
Stalin appeared on the cover of U.S. weekly 11 times. In 1939, Time named him the first Man of the Year for signing the Molotov-Ribbentrop Pact. The peace treaty with Germany was named “last attempt to resist the Third Reich by means of diplomacy”. Weekly described the document as a sentence to Poland, which under the terms of the pact was divided between the Soviet Union and Germany. In 1942, the magazine recognized Stalin as Person of the Year again and awarded him the title for fierce resistance to the invasion of Nazi Germany during the first years of the war. 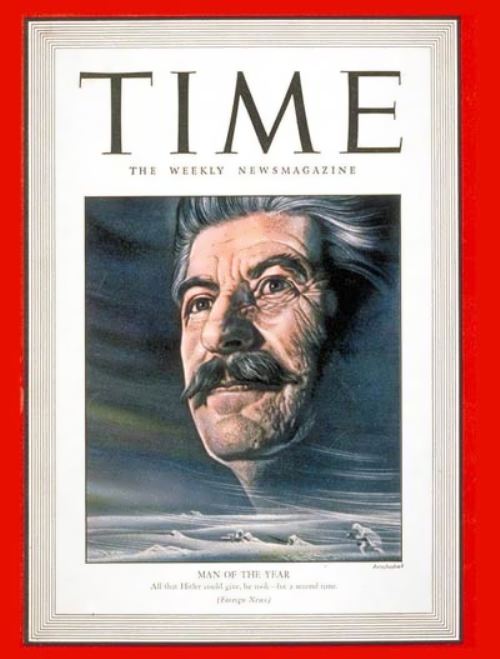 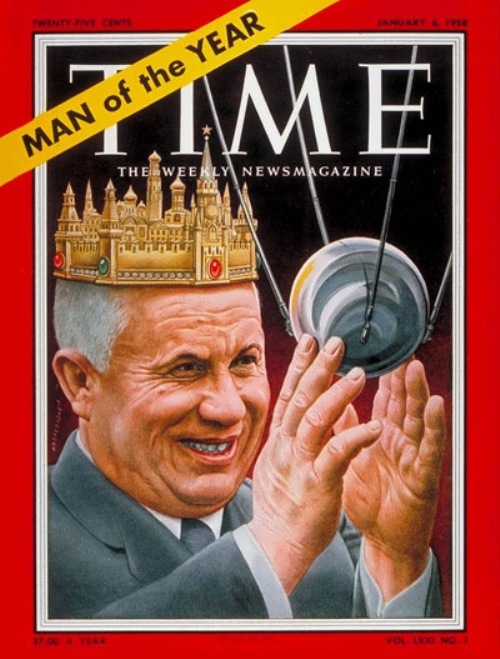 His portraits appeared on the Time cover with enviable regularity, namely 12 times. There were different backgrounds: a sheaf and red crescent, huge red star, Kremlin’s Spassky Tower offering a bouquet to the leader while hiding a cudgel behind, explosion and others. It is interesting, that once Khrushchev appeared on the cover only because an artificial satellite could not be recognized as a person, besides the names of designers who had created Sputnik- 1 were kept secret. Time editors had no choice but to place the photo of Khrushchev with the satellite in his hands in 1957. 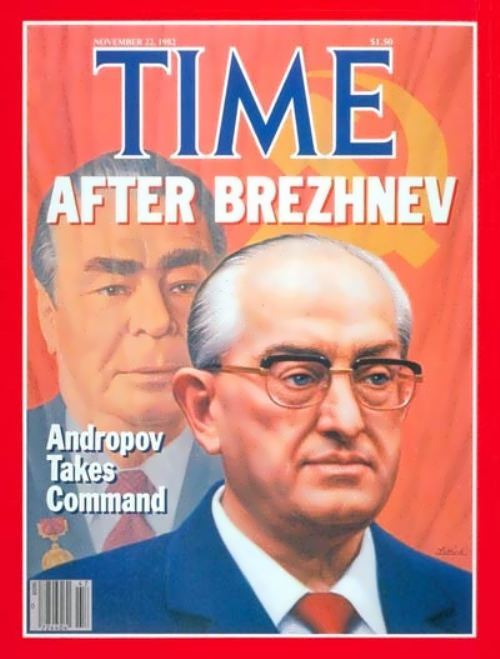 If Leonid Brezhnev graced on the cover of Time 14 times, including one time after his death, his successor, Yuri Andropov wasn’t so “lucky” – he was a cover man only 3 times, including one time in 1983 – paired with Ronald Reagan. Reagan and Andropov were named the most not negotiable politicians by magazine editors. Reagan, as known, called the Soviet Union “evil empire” and Andropov managed to collapse all negotiations on nuclear arms control and a Korean passenger airliner was shot down over Sakhalin. 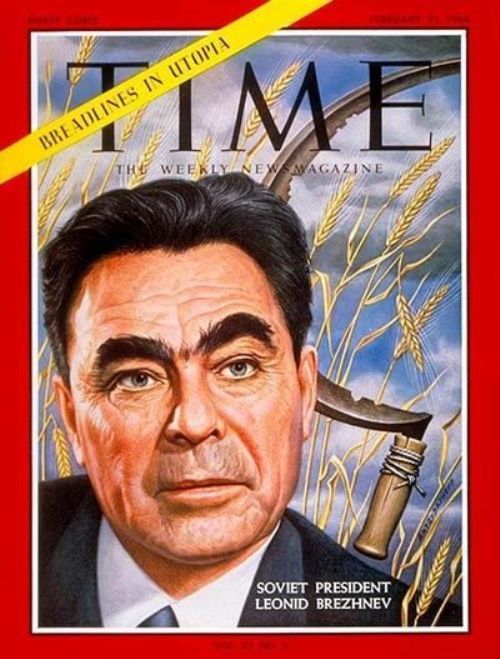 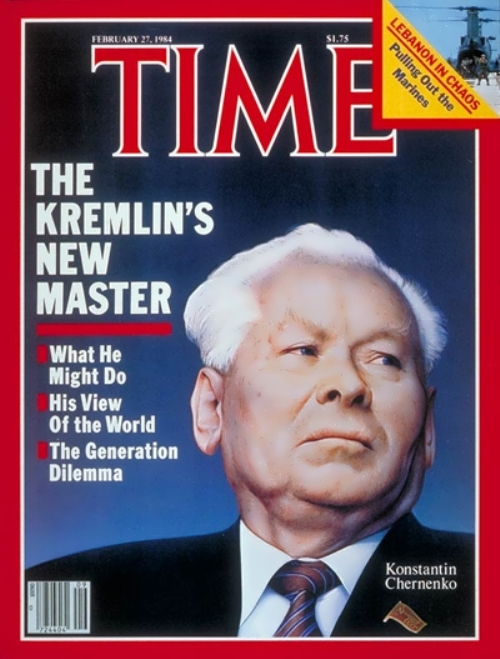 In February 1984 there was the only Time issue with Konstantin Chernenko on the cover. Soviet leader, who lead the country for only a year and 25 days, was named “The Kremlin’s new master” and journalists tried to find answers to almost eternal questions: “Who is to blame?” and “What to do”. More specifically, they asked: “What he might do?” and “His view of the world”. 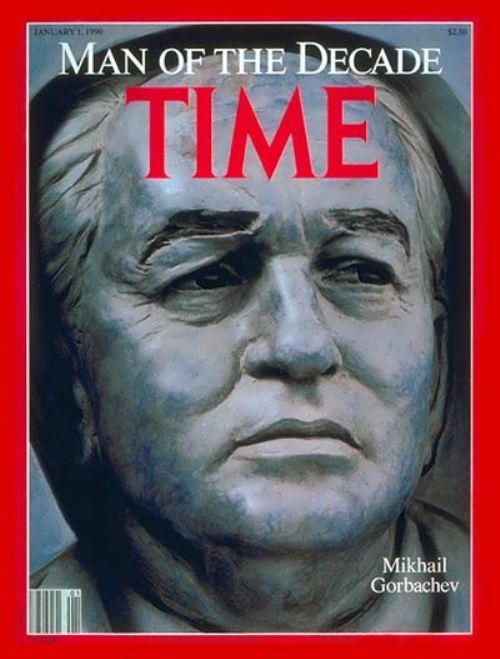 The first and the last president of the Soviet Union Mikhail Gorbachev appeared on the cover of Time 15 times. So, in 1987, the editors “awarded” the last general secretary of the Central Committee of the CPSU with an image on the cover for “destroying the Soviet lethargy”. Two years later, the “success” was repeated, while Gorbachev was named not just a Man of the Year but Man of the Decade for his invaluable contribution to the termination of the Cold War. Last time Mikhail Gorbachev appeared on Time cover in December 1991. The picture was accompanied by the headline “Man without a country”. 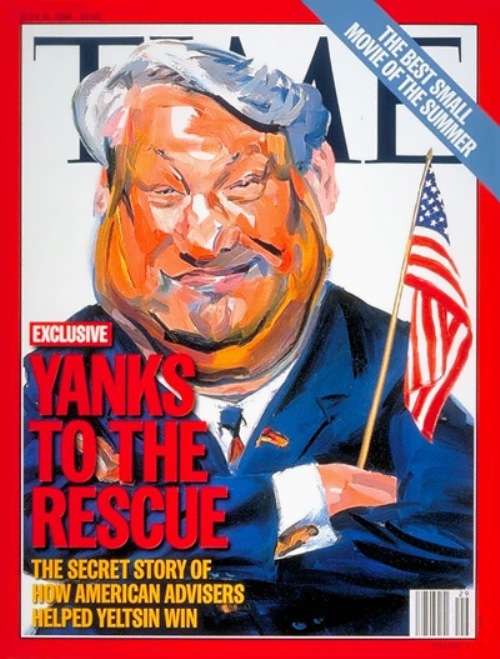 Russia’s first president Boris Yeltsin was on the cover of Time 5 times. In 1991 he was named the “Big boy of Soviet policy”, a little later in the same year he appeared in the August issue of the weekly next to the title Russian Revolution. Two years later, the photo of the head of the country was accompanied by the headline “Yeltsin’s last stand”, and in 1996, after his re-election as president, Yeltsin’s image appeared on the cover with an American flag in his hand, and was accompanied by the slogan “Yanks to the rescue”. 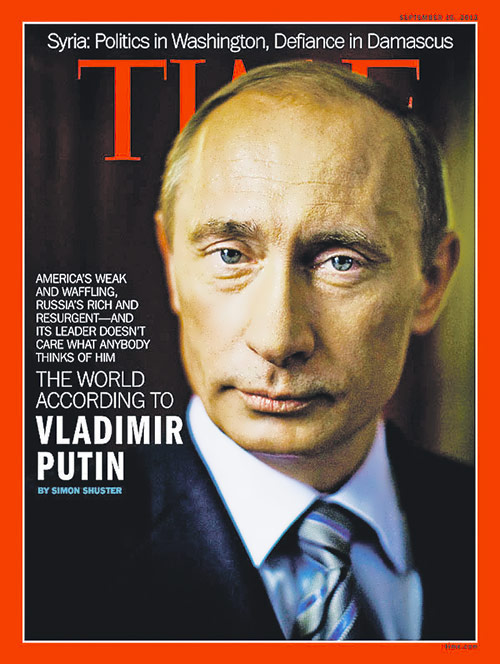 “America’s weak and waffling, Russia’s rich and resurgent. It’s leader doesn’t care what anybody thinks of him”. The journal noted that there are a lot of contradictions between Russia and the United States. For the first time, Putin appeared on the cover of Time in March 2000 under the heading Out Of The Shadows. Journalists wondered if Putin could change the country before it changed him.
In January 2001, there was a collage – Putin in the image of Lenin (even with a cap in his hand) – “Putin’s Russia. As he grows ever more authoritarian, the President’s popularity rises”.
Then he appeared on Time cover in 2003. There were two articles about Russia: on Khodorkovsky’s arrest and on freedom of speech).
In July 2006, there was a photo of Putin in a drop of oil on the cover of Time. “The Power of Russia’s Oil” – was the headline of the special report for the G8 summit.
In 2007, Putin was named Person of the Year and his photo was accompanied by the headline “Vladimir Putin, Tsar of new Russia”. And at the end of 2011 there were an issue under the title “The Putin Problem”.