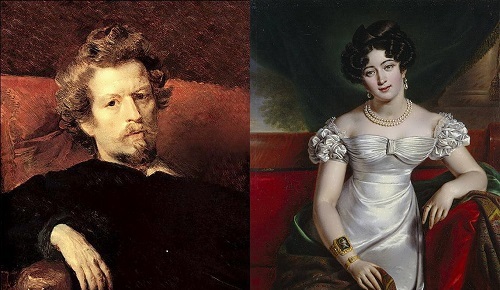 In 1875, childless and capricious old woman died in the poverty. She had only memories of what had happened and what would die with her. The woman was Yulia Samoilova, who was buried at one of the cemeteries in Paris.
They could be called the perfect couple: he was a great painter, she was a beautiful girl – the dream of the great artist.
Yulia Samoilova and Karl Bryullov first saw each other in 1830 in Italy, in the famous salon of Princess Zinaida Volkonskaya. It was a meeting of two stars, though not equal. Samoilova was an aristocrat and Bryullov was just an artist.
Yulia Pavlovna fell in love with creative, but often poor, men: opera singers, actors, composers, artists. Countess Samoilova supported them, but she wanted to find a real genius, whom she could admire. In Karl Bryullov she found the ideal she had dreamed about. He probably would not have noticed a lovely Countess, if Julia Pavlovna hadn’t been a perfection of beauty for him.

Karl Pavlovich Bryullov was born on December 23, 1799 in St. Petersburg. As a child, he was extremely weak, and when Karl got over the illness, his father began teaching him to draw and immediately noticed the boy’s talent.
10-year-old boy entered the art academy and painted better than his classmates, who were older. Karl helped his friends, improving their work and asked only one thing – to read aloud while he was drawing.
In 1821, Bryullov received a gold medal for his painting The Appearance of Three Angels to Abraham. 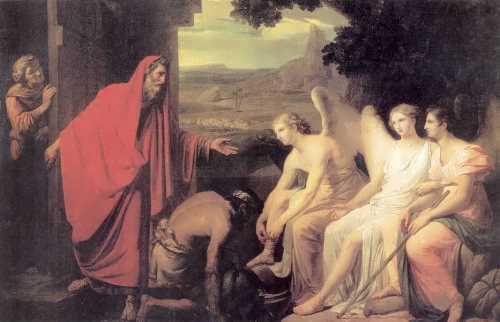 Appearance of Three Angels to Abraham

After graduation the Bryullov brothers settled in wooden workshops build in St. Isaac’s Cathedral. But Karl wanted to continue his education in Italy, the country of famous painters and sculptors. His dream came true in 1822. On May 2, 1823 the brothers came to Rome, where Karl stayed for 13 years.
Alexander Bryullov went to France to study architecture, then returned to Russia and got married.
“I will never marry. My wife is an art”- Karl wrote in 1830 in his congratulatory letter to his brother, recently received an order to build two luxury houses for the Countess Samoilova.
Yulia was called “the last of Skavronsky” because she became the sole heir to her grandfather Martyn Skavronsky. (Martha Skavronskaya was the wife of Peter the Great, mother of his children) 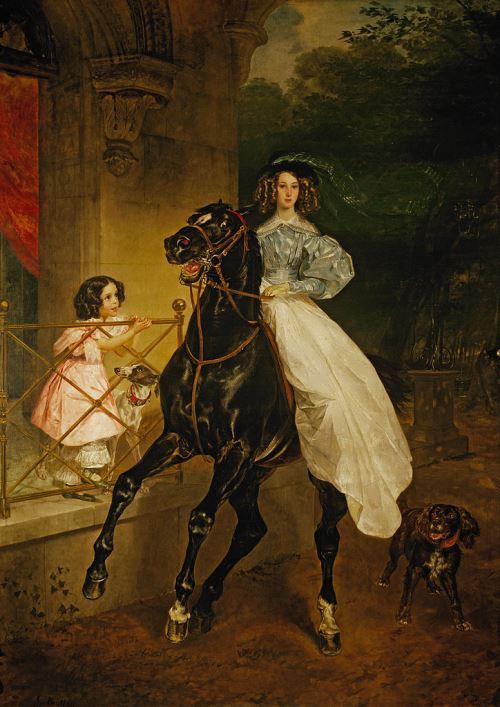 Yulia’s mother, Maria Pavlovna Skavronskaya was a wife of Count Pavel Petrovich Pahlen, who was officially regarded as the father of Yulia. However, the girl had southern beauty, black curls, velvet eyes and little face of Italian Madonna. It should be noted that Maria Pavlovna’s stepfather was an Italian, known in Russia as Julius Pompeevich Litta.
Yulia Pahlen was a very charming girl. Alexander Pushkin dedicated a poem Beauty to her.
But the beauty with a fantastic dowry couldn’t find a suitable groom. It was rumored she had a love affair with a great connoisseur of feminine beauty Emperor Alexander I. As if he insisted that Yulia married Count Nikolai Alexandrovich Samoilov, adjutant of the emperor. Their marriage was unsuccessful, and after a few months they decided to divorce.
Emperor Nicholas I wanted Samoilova to sell her estate in Grafskaya Slavianka but she refused. Later she went to Italy, where she had a palace in Milan and estate Yulia on Lake Como.
Samilova was a friend of famous composers Verdi, Rossini, Donizetti, Bellini, Pacini, paid opera performances in La Scala, was interested in Catholicism. And her main hobby was patronizing talented but poor artists, musicians, actors. 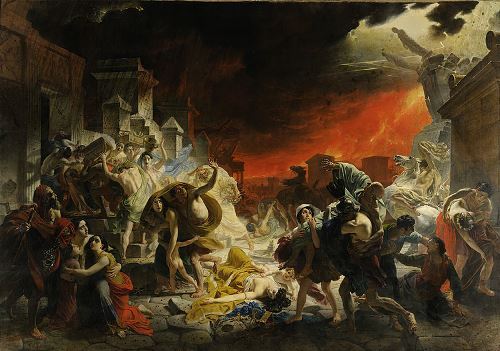 The Last Days of Pompeii

Countess Samoilova visited Bryullov in his Roman workshop where he worked on The Last Day Of Pompeii. She heard rumors that Karl was looking for a model for a central figure in the composition. Yulia was ready to give him as much time as he needed for the job. Her appearance in the studio turned into a tragedy. One of the artist’s nudes, French Adelaide Desmoulins, committed suicide. She was passionately in love with Bryullov, but he was keen on Samoilova. So Adelaide drowned herself in the Tiber. After the tragedy Samoilova invited Bryullov to her estate in Naples.
Yulia appeared in the image of Italians in his genre paintings. It’s interesting, but almost all of his “beautiful Italians”, painted before meeting with the countess, were like Yulia.
Samoilova became his muse and inspiration of his two major paintings – Horsewoman and The Last Day of Pompeii, where her beautiful face can be seen several times.

In the left corner of the painting The Last Day of Pompeii, next to a woman with a pitcher, Brullov portrayed himself – in the image of the artist, who is saving the most expensive: a box of paints. 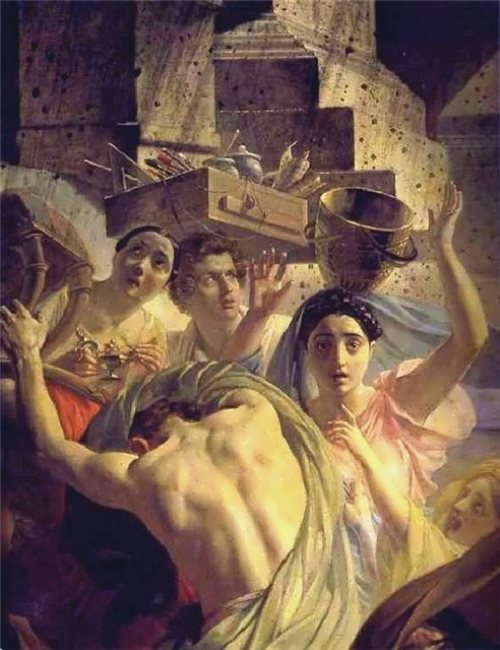 At that time, Yulia and Karl didn’t hide their intimate relationship. According to people who knew her those years, the countess had changed dramatically.
At first, they only appeared everywhere together. Bright, beautiful they were a memorable couple. Together they traveled to Italy. “I love you more than I can say, till the grave” – a letter containing such recognition, found the artist, no matter where he wandered away from Yulia.
Their relationship was higher than the usual notions of morality. Even jealousy was alien to them, in fact, they never hid from each other their love affairs that occurred from time to time. “Tell me where you live and whom you love? Nana or the other? I kiss you, and truly I will write to you often,” – he wrote his beloved Yulia.
Neither short-term separation, nor love affair could make their relationship less tender.
Samoilova and Bryullov passionately wanted to unite their lives, but circumstances… Karl married young beauty Emilia Timm.

In 1836 Bryullov returned to Russia and began working on the painting The Siege of Pskov. Samoilova also visited her homeland. But Karl was fascinated with creating sketches for the picture and then went to Pskov to draw from nature. He didn’t even answer her letters. 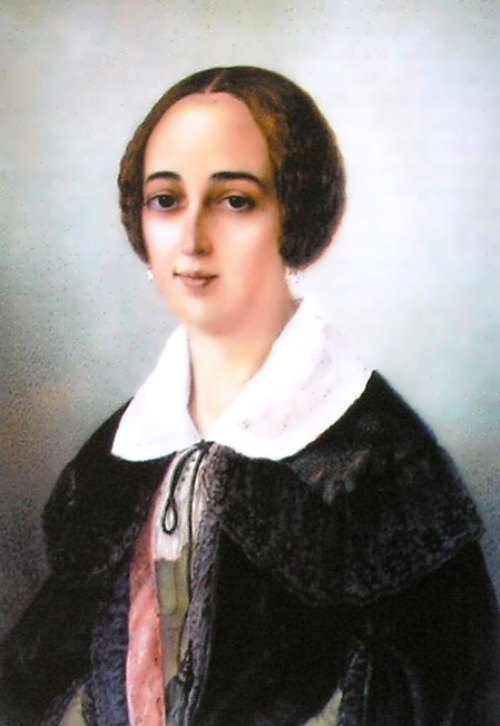 Yulia Pavlovna was hurt, but didn’t show this in public.
St. Petersburg society was surprised when Bryullov married Emilia Timm, the daughter of the mayor of Riga, a talented pianist and outstanding beauty. He was thirty-nine years old and Emilia was nineteen when on January 27, 1839 their wedding took place. The first weeks of family life were peaceful, but on March 8 Karl demanded a divorce. He found out that Emilia’s lover was and remained after the wedding her father Feder Timm.
Samoilova, arrived from Italy, found Bryullov close to suicide, but helped him to get over only to inform him that she was going to marry young opera singer Giovanni Peri. The artist asked her to pose once again and painted a picture Countess Yulia Samoilova with her adopted daughter Amazilia Paccini, leaving the ball – a gift for her wedding.

Samoilova remained in mourning until the end of her life after her husband Peri died suddenly of tuberculosis. She didn’t meet Bryullov again, although he also soon came to Italy – to die.
On June 23, 1852 the artist died in the village of Marciano near Rome and was buried at the cemetery of Monte Testaccio. At that time Samoilova was in Paris. She continued to love the artist, because even after losing all her money and sold out all paintings, Yulia was not willing to sell only Bryullov’s works. 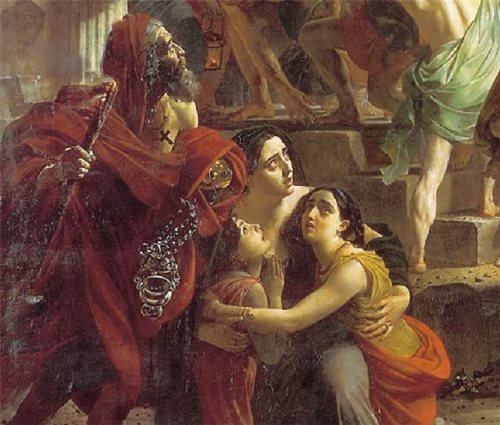 The Last Days of Pompeii. Samoilova as mother of two children. 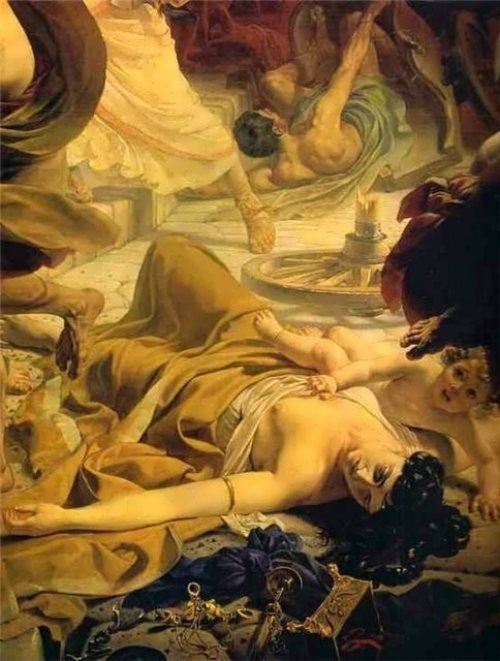 The Last Days of Pompeii. Samoilova on the ground 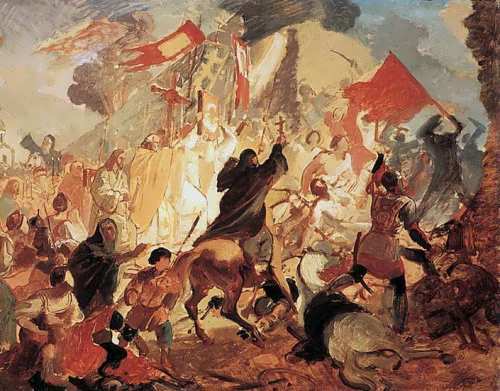 The Siege of Pskov 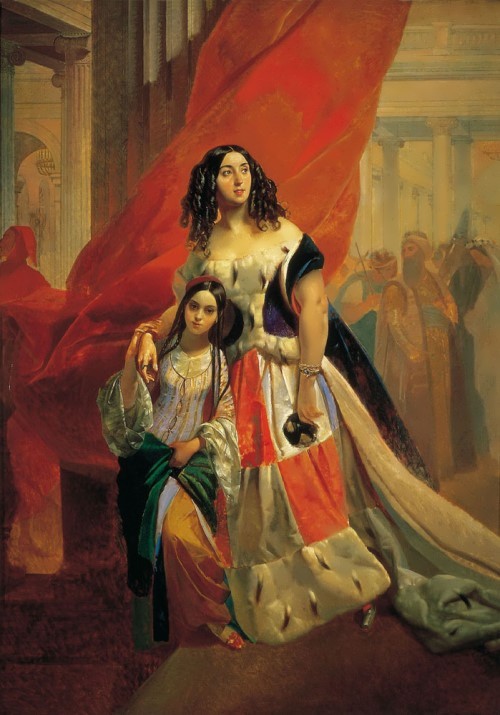 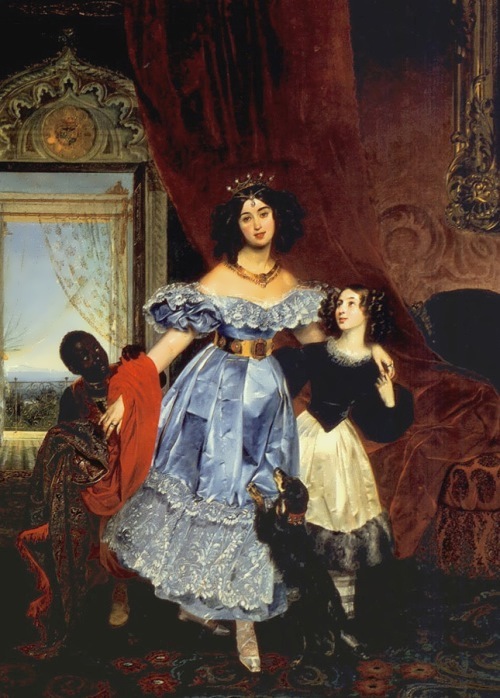 Portrait of Countess Yulia Samoilova with Giovannina Pacini, and an Arab boy