Vasiliy Kandinsky and his women 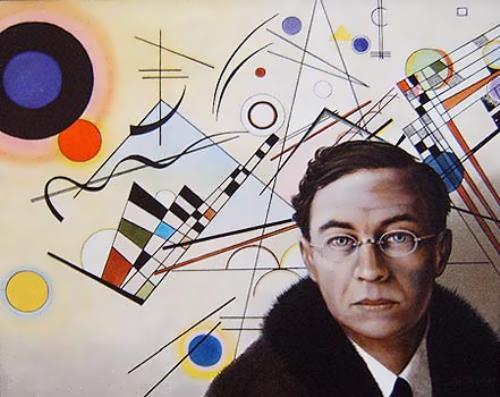 Vasiliy Kandinskiy (1866-1944) was the famous Russian artist and art theoretician. You know, he was a great master and founder of abstract art.
“Kandinsky calls abstract the content that painting must express, that’s to say this invisible life that we are. In such a way that the Kandinskian equation, to which we have alluded to, can be written in reality as follows: Interior = interiority = invisible = life = pathos = abstract”.
On November 7, 2012 at Christie’s Impressionist and modern art auction in New York Kandinsky’s Study for Improvisation 8 (1909) was sold for $23 Million.
Before this sale, the artist’s last record was set in 1990 when Sotheby’s sold his Fugue (1914) for $20.9 million.

Born in Moscow, Kandinsky spent his childhood in Odessa. He graduated from the University of Moscow, studying law and economics. But at the age of 30 he became an artist.
In 1896 Kandinsky settled in Munich and returned to Moscow only in 1914. After the Russian Revolution of 1917 he returned to Germany. But when Hitler came to power, Vasiliy moved to France. There he lived the rest of his life, became a French citizen in 1939. The artist died at Neuilly-sur-Seine in 1944.

Vasiliy Kandinskiy’s women
In 1957, the European media paid much attention to two events in Germany and France. Common-law widow of famous artist – Gabriele Munter (she was an artist too) gave Munich a priceless gift – a few hundred of his works, drawings, watercolors, dozens of notebooks with sketches, diaries, as well as his letters and over two thousand of photos of the artist. All these things can be seen in Lenbachhaus.
At the same time another woman, artist’s official widow, Nina Andreevskaya-Kandinskaya, sold two of her husband’s works for half a million dollars to buy a necklace with diamonds by Cartier. And the next day she was at the Opera Garnier with her new young lover. 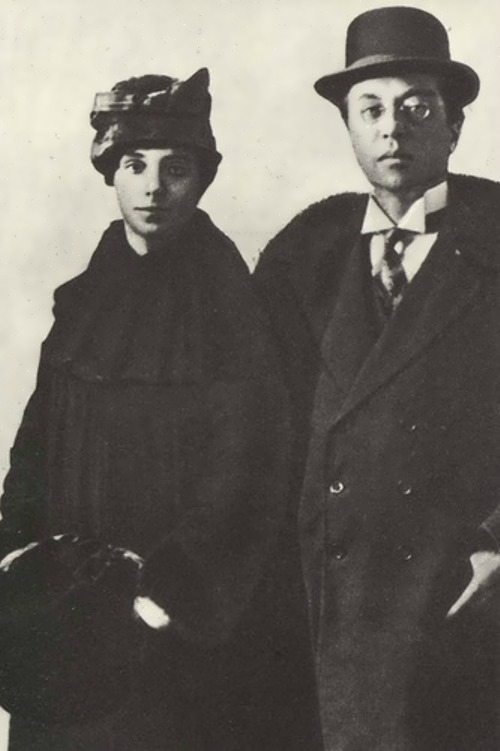 So different funeral
In five years Gabriele Munter died. There were thousands people form Munich, many Kandinsky’s fans from all over Europe and from overseas at her funeral.
And in 1983 in Switzerland at the Villa Esmeralda in the bathroom Nina Kandinskaya was killed. More than $7 million worth of jewelry was stolen, including the famous Cartier necklace. Her husband’s pictures weren’t touched – 30 years ago they didn’t cost fabulous money for which they are bought now. The killer wasn’t found. Only 14 persons presented at Nina’s funeral, none of them could name the date of her birth. And to this day there is only the date of death on her gravestone. 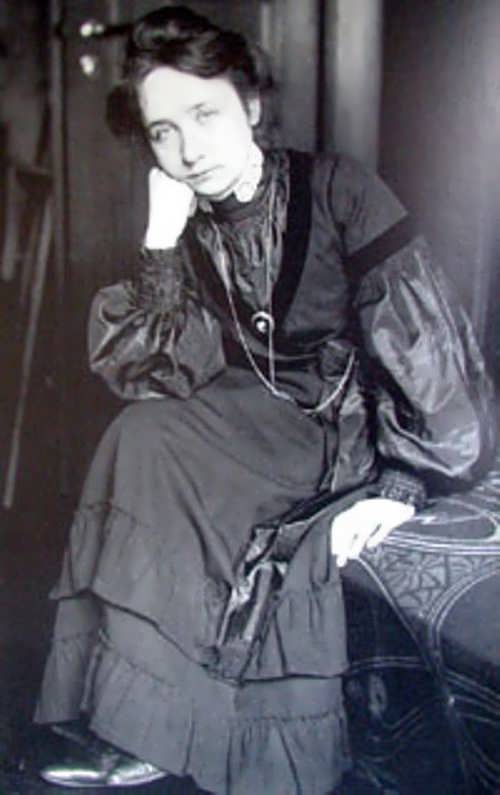 Life and Love
Young Kandinsky married his cousin Anna Chemyakina, who was six years older. Anna married a future law professor, and became a wife of the young artist. But she took care of her husband, went with him to Germany. For many years Anna had to pretend that she didn’t know anything about passionate relationships between her husband and a young artist Gabriele Munter. Their love affair lasted for more than ten years. For several years the Kandinskys lived in a house, which was bought by Gabriel for them.
Vasiliy was very jealous, demanding proof of Gabriel’s love. But she waited patiently for a marriage proposal.
In 1916, after a successful Stockholm exhibition, which was organized by Gabriel, 50-year-old Kandinsky returned to Russia, promising finally to divorce Anna. And he did it! However, he married his new girlfriend, 17-year-old Nina Andreevskaya.

40 pages of pain
Gabriele did not know about this, and continued to wait for her lover. He did not answer her letters: there was a Revolution in Russia, it was rumored that the Bolsheviks were ruthless with undesirables.
Many requests were sent to different departments by Gabriele to get information about Kandinsky’s fate. Finally, after a year she was told: “the artist is alive”.
Then she received a letter from his lawyer: he demanded to return all his pictures, his old bike, clothing and other personal things. Gabriele only learned that Kandinsky had been married again and lived in Germany. Insulted and betrayed, she wrote him a 40-page letter in which she expressed what she thought about the former teacher, beloved and common-law husband. After that letter Kandinsky sent a notarized document, which gave Mrs. Munter right to be an owner of his pictures.
Gabriele was depressed and Kandinsky’s new wife became the object of gossips. Newspapers told about Madame Nina’s clothes and jewelry. But then Hitler came to power, avant-garde art was recognized as “Degenerate art” and the Kandinskys left for France.

Gabriele had “degenerate” pictures, which were hidden in her house. Because of the pictures she could be arrested and put in prison. Munter couldn’t destroy her beloved man’s pictures. She had been living in fear, risking her life for 10 years, without leaving home, even during the bombing.
The artist and his young wife lived near Paris. Vasiliy continued to paint, Nina bought so adored jewelry. Even the news of her husband’s death she received in the jewelry store, buying another piece of jewelry.
After the war, people became interested in the Russian avant-garde, and Nina became a very rich widow with a house in Paris, a villa in Switzerland, a car with a personal driver, and personal jewelers who knew about her passion for jewelry. Madame was offered more and more jewelry, which were paid with Kandinsky’s paintings. The widow was a regular guest at the social events, lavishly decorated with jewels and accompanied by young men. The older she was, the younger her lovers were. The End was on September 2, 1983, when she was found by the Swiss police at the villa…..

Vasiliy Kandinsky and his women 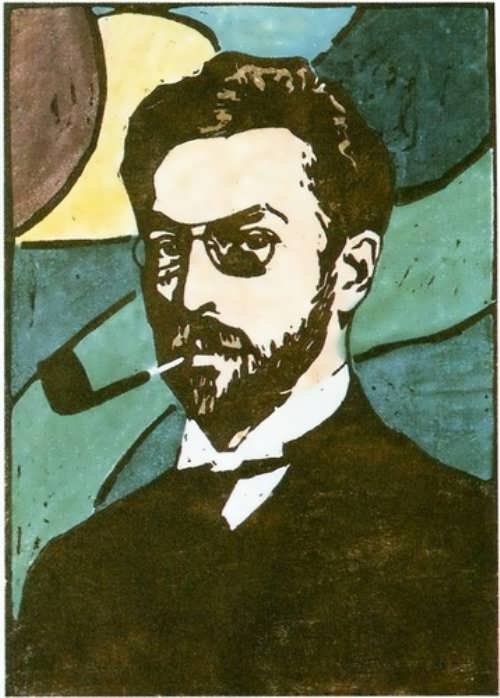 Portrait of Kandinsky by Gabriel Munter 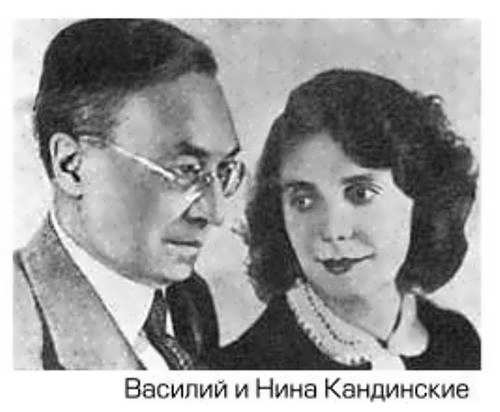 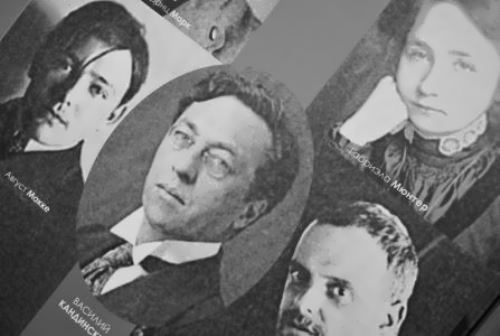 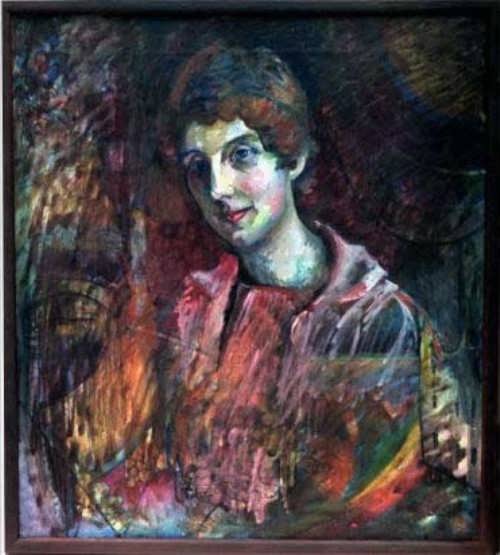 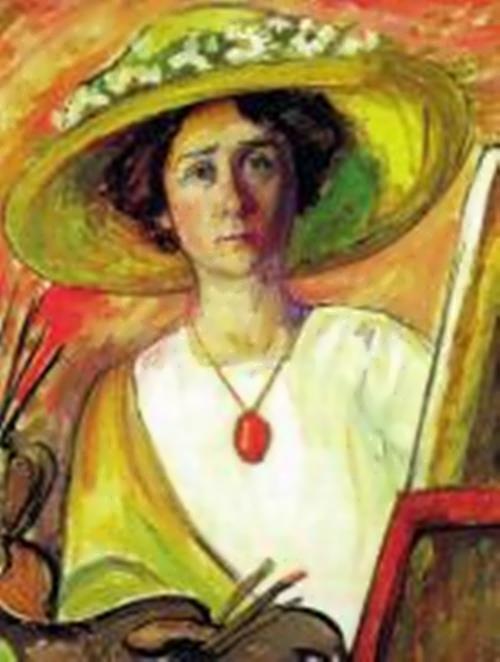 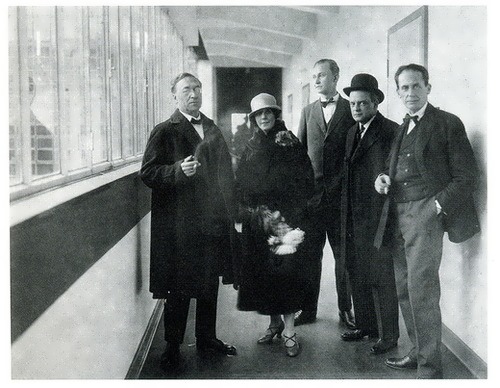 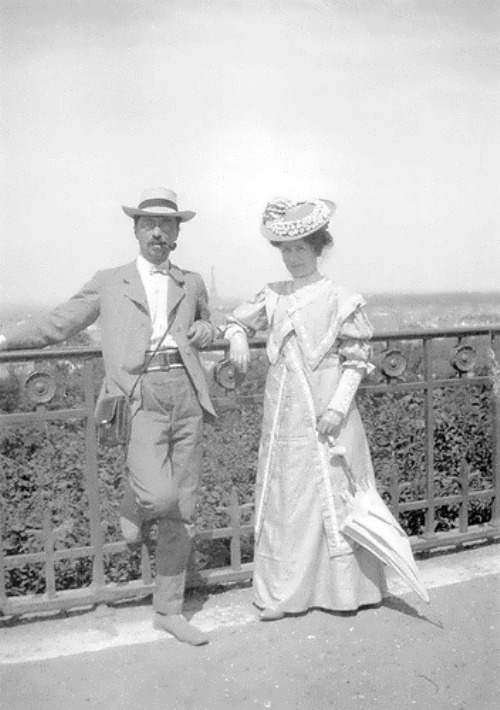 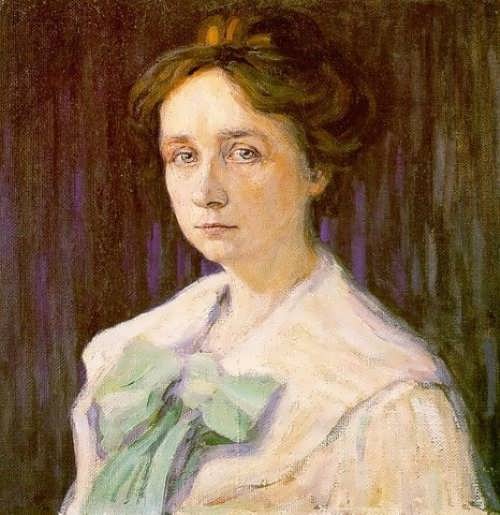 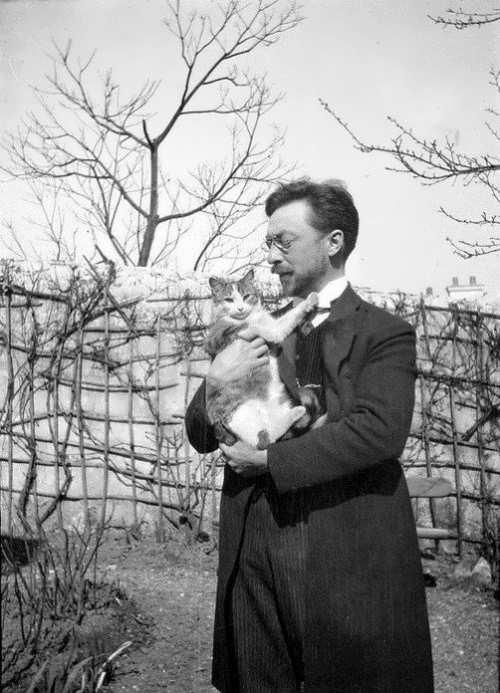 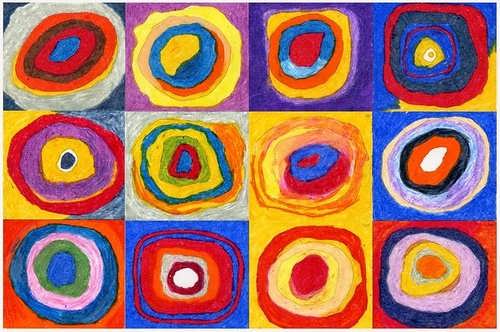 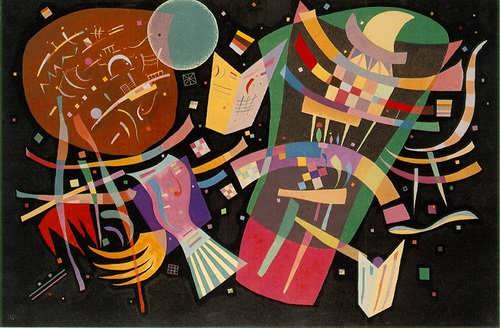 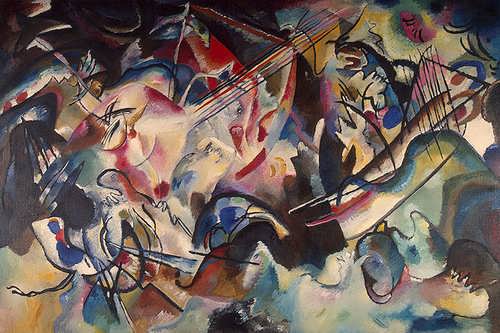 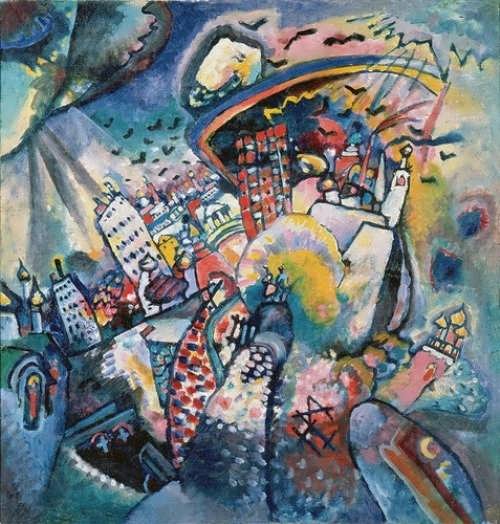 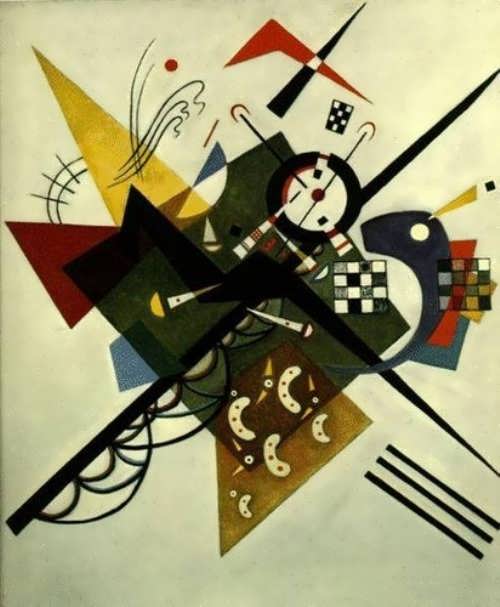 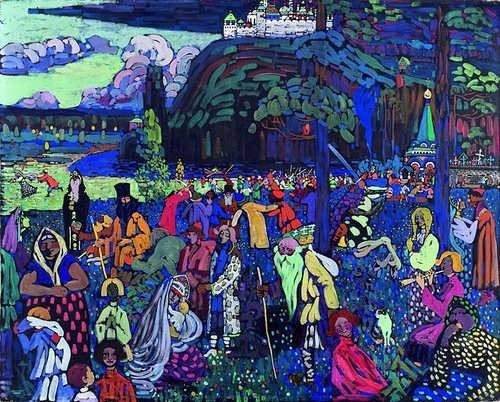 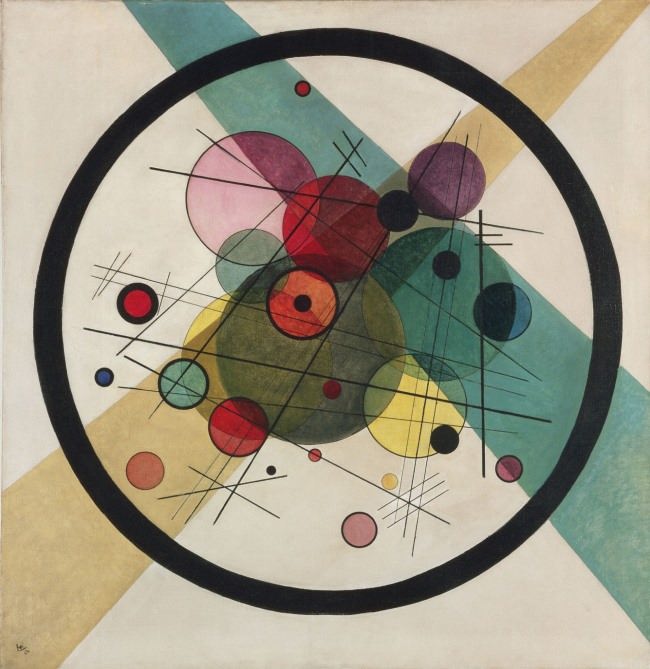 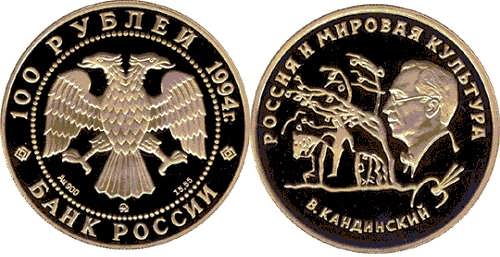 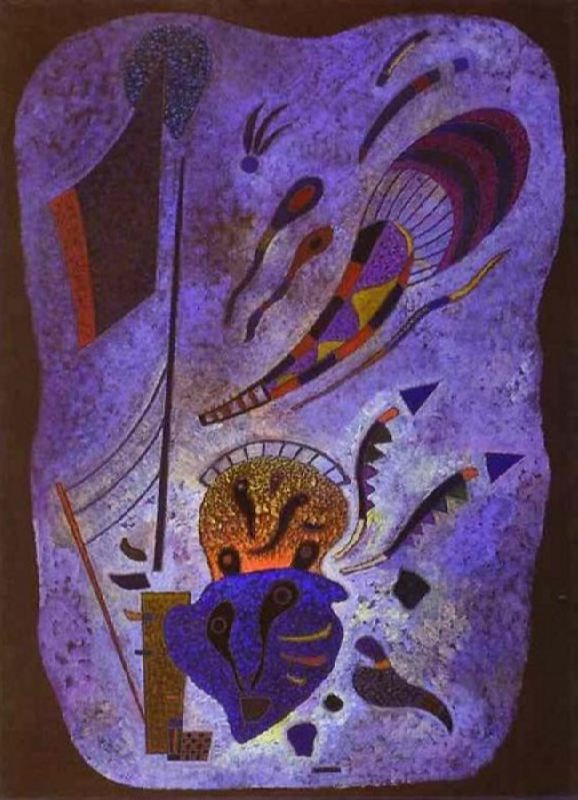