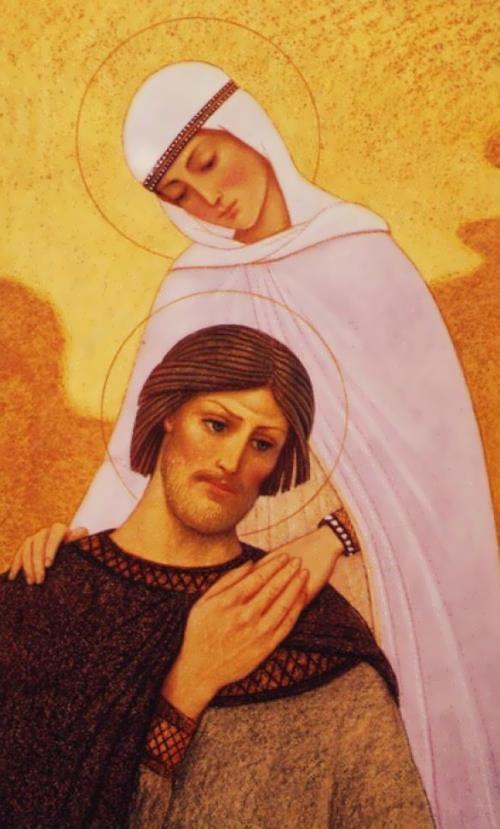 Peter and Theuronia are Orthodox saints and characters of folk legends. Some researchers identify Peter and Theuronia with real historical characters – Prince of Murom Davyd Yurievich and his wife, Princess Euphrosinia, who became monks and took the names of Peter and Theuronia.
The Tale of Peter and Fevronia of Murom appeared in the middle of the 16th century. The author of this life of the saints, the monk Yermolai, processed and recorded the oral Murom stories. Researchers believe that Ermolai combined two fairy-tale stories – about the wise virgin and the fiery serpent.
These motifs of the fairy tale the monk used, creating the history of the Murom saints Peter and Fevronia at the request of Metropolitan of Moscow. The order was made after Peter and Fevronia were canonized at the church cathedral. The plot gained popularity and began to be developed further in iconography and literature.
According to legend, a fiery serpent came to the wife of Paul, who reigned in the city of Murom. This happened when the prince was not at home. When Paul learned about those visits, he ordered his wife to find out how to kill the monster. The serpent told that a certain Peter would be his murderer, but he could be defeated only with Agrikov Sword.

The name of the prince’s brother was Peter and he decided to kill the serpent. He managed to find Agrikov Sword, which was hidden in the church between the stones of the altar wall. Peter took the sword, went to his brother’s wife and killed the monster. Unfortunately, because of the magical serpent’s blood Peter fell ill with leprosy. Peter suffered from the disease, and no one could help him. One day he saw a way to salvation in a dream. Peasant girl Fevronia could heal the prince.
The girl agreed to heal the prince, but in response she wanted Peter to marry her. He gave his word, but in the end, when the girl healed him, broke the promise. Fevronia was poor and for this reason she did not attract Peter as a spouse.
The cunning healer, however, purposely cured the prince not completely, and left one ulcer. Prince became ill again after the promise was broken. So she healed Peter for the second time, and he married the girl.
When Peter became Prince of Murom after his brother Paul, the boyars were against the idea that the peasant girl would become a princess. They demanded either to leave Murom or to divorce his wife. As a result, Peter together with his wife sailed from the city, and troubles began in Murom. The struggle for power led to killings, and the boyars had to ask the prince to return. Peter came back along with his wife, and the townsfolk eventually fell in love with Fevronia. 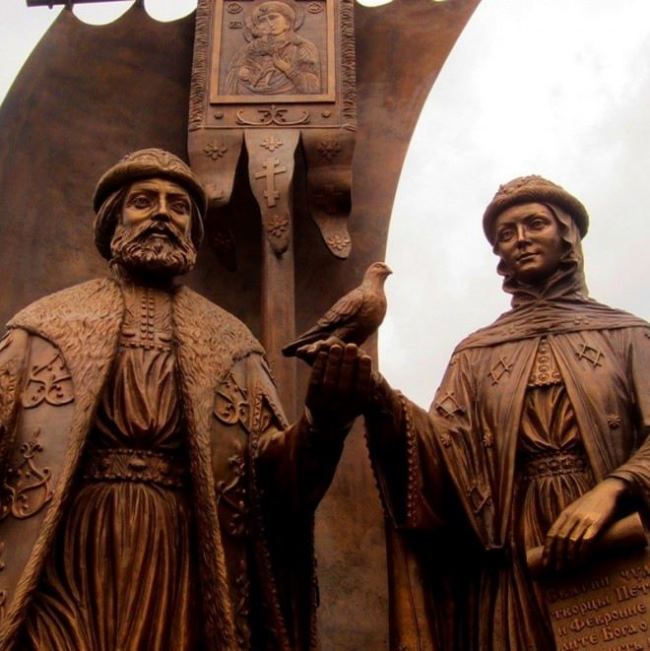 Yekaterinburg. Monument to Peter and Fevronia

Real historical characters, later canonized as St. Peter and Fevronia, were Prince Muromsky Davyd Yurievich and his wife. Little is known about the prince’s wife. Davyd Yurievich was a supporter of the Grand Duke Vsevolod the Big Nest and fought on his side in all the significant battles of that period.
In 1208 Vsevolod the Big Nest gave Davyd Yurievich the town of Pronsk, which he took from the previous prince Oleg for his fault. However, in the same year, Oleg gathered his brothers and drove Davyd out of the city.
After Vsevolod the Big Nest died, Prince Davyd began to support his sons Yuri and Yaroslav and participate in the campaigns organized by them.
If you believe the chronicles, Prince Davyd became a monk and died one day with his youngest son Svyatoslav, on Easter 1228. In the annals there is no evidence that the prince’s wife also became a nun, as well as the day of her death is unknown. However, the church tradition states that the prince and the princess died on the same day.
It is unknown if the legendary Peter and Fevronia had children. The really existing Prince of Murom, Davyd Yurievich had two sons – Yuri and Svyatoslav, and daughter Evdokia.

According to legend, when Peter and Fevronia were old, they went to different monasteries and prayed there that they would die on the same day. They asked to bury them in one tomb, but this was incompatible with the title of monks. As a result, they were buried in different monasteries, but the next day the saints appeared in one coffin.
In the annals it is said that the couple passed away and was buried in April 1228.
The burial place of the holy couple was the cathedral church of Murom, or the Virgin-Christmas Cathedral. In 1553 Ivan the Terrible ordered to build this temple over their relics. In the Soviet years, the relics were given to the local museum and exhibited in an anti-religious exposition. Then they were moved to the Holy Trinity Monastery, where believers could worship them.
Now Peter and Theuronia, Saints David and Ethrosinia, are the patron saints of family and love. 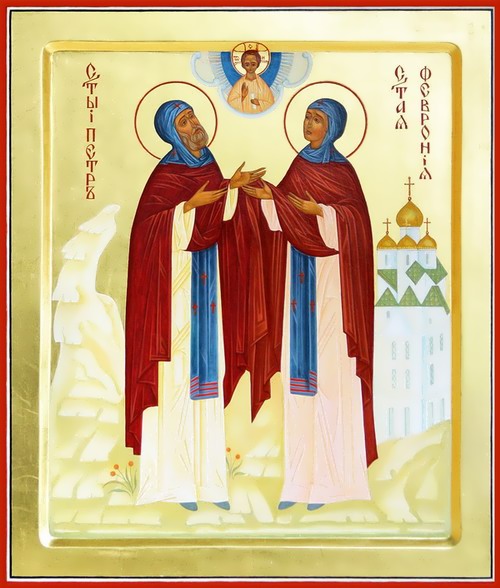 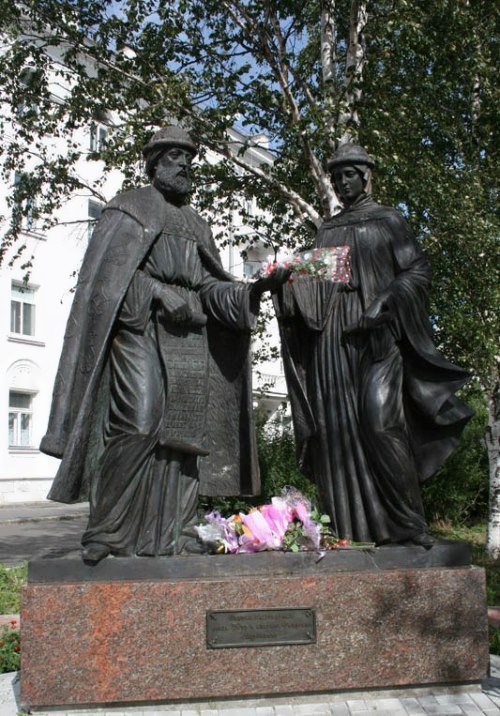 Monument to Peter and Theuronia in Arkhangelsk 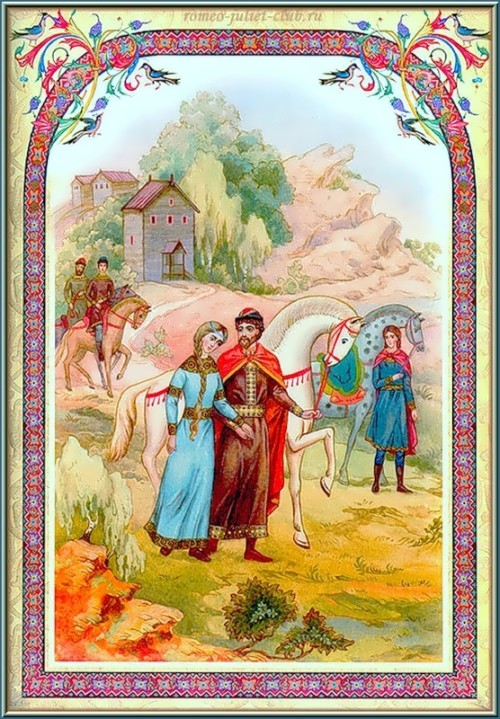 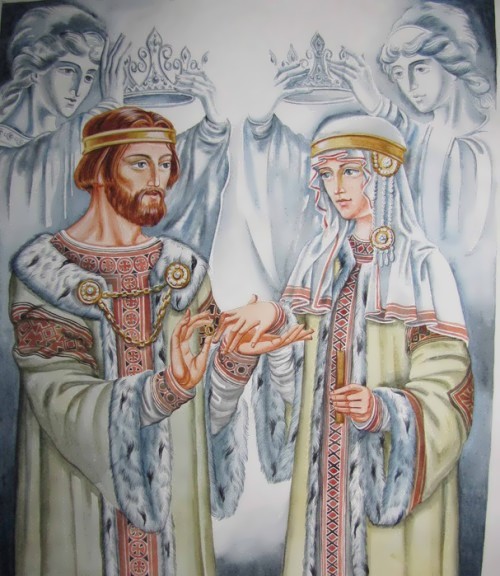 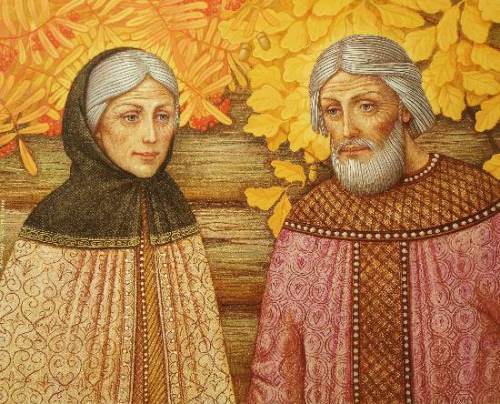 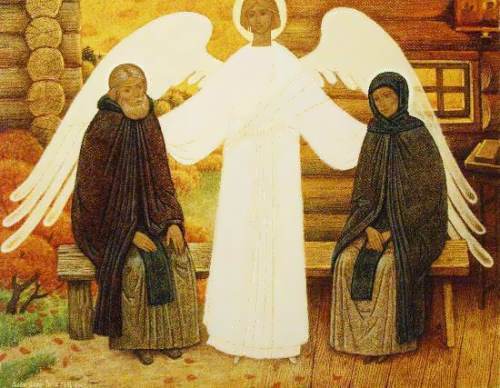 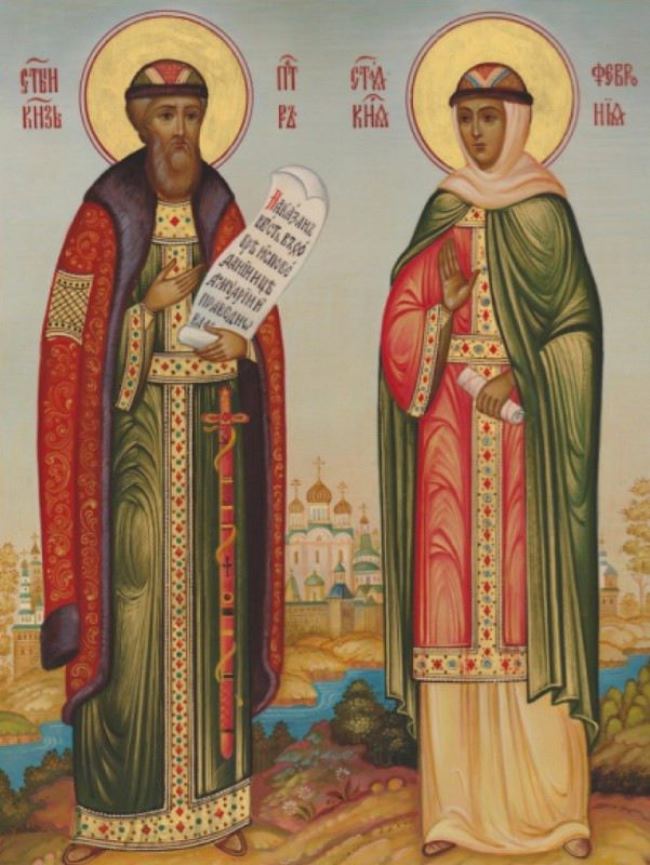 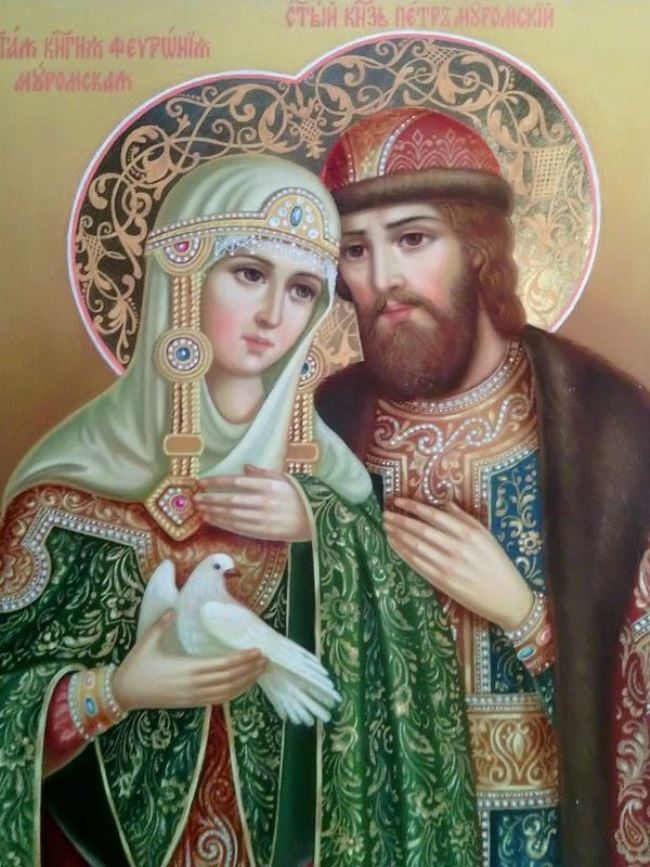 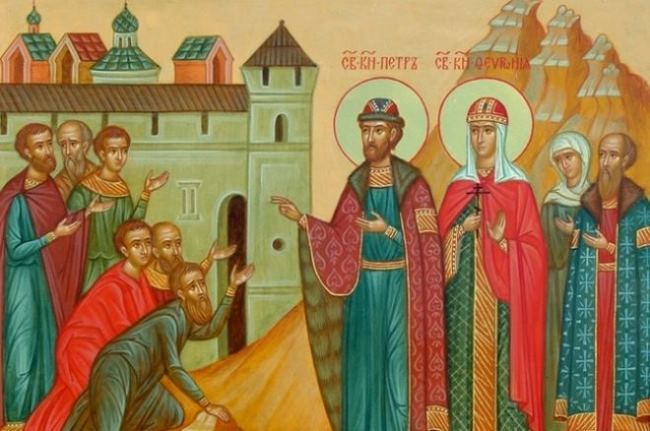 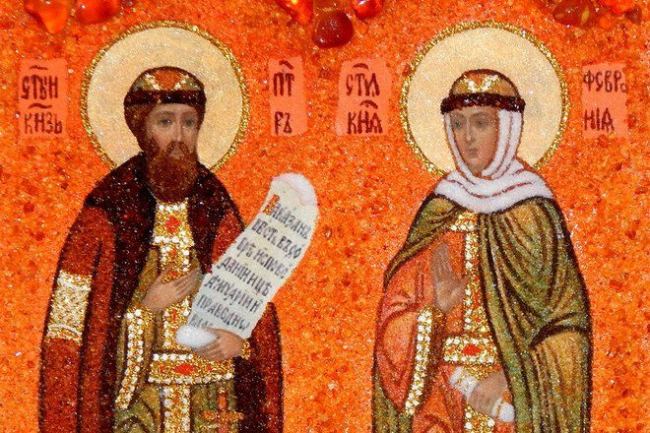 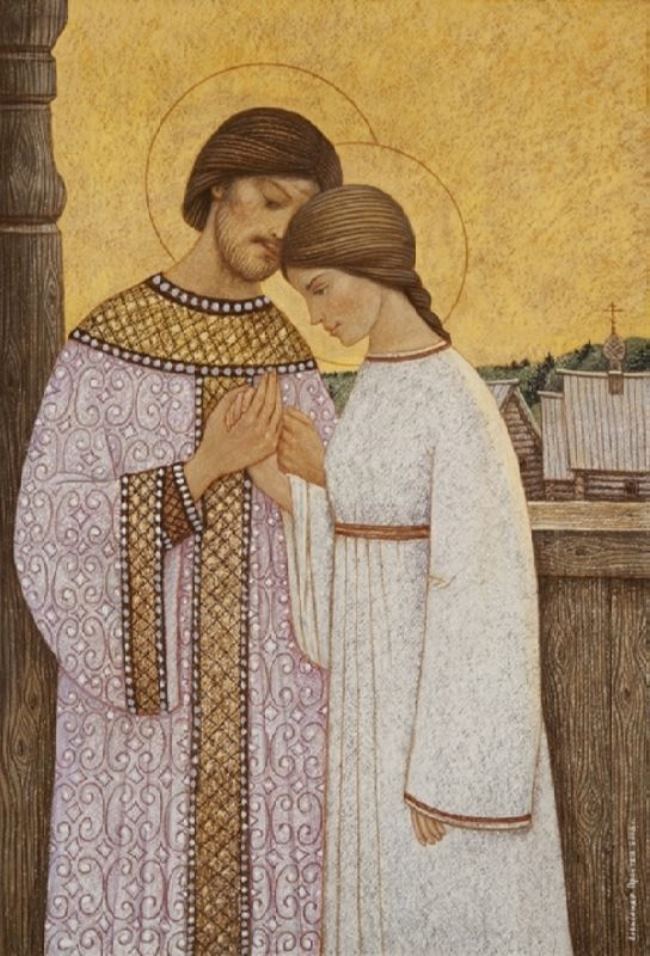 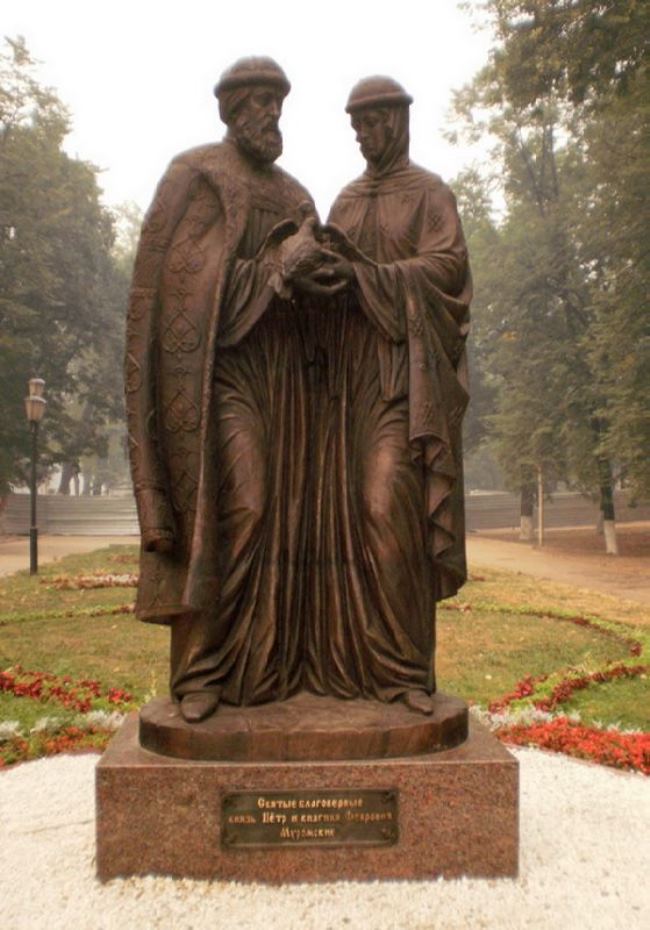 Yaroslavl. Monument to Peter and Fevronia