« Lenin all over the world 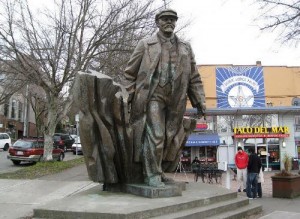 Lenin could be found even in the United States. For example, this statue was moved from Czechoslovakia to Seattle in 1933. It was a Washington resident Lewis Carpenter, an English teacher who saw the monument and took it from the landfill by paying the fare to Seattle. (Photo by Chris Yunker)