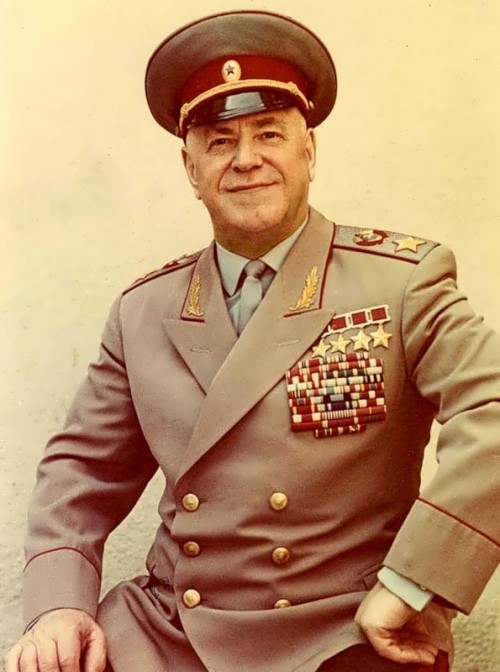 Georgy Zhukov is the legendary Soviet commander, Marshal of the Soviet Union. By the way, he was one of the key figures of the Red Army during World War II and later was popularly nicknamed Marshal of the Victory. After the death of Joseph Stalin, Zhukov was the first deputy Minister of Defense of the USSR, then he headed this department. But in 1958 Zhukov was expelled from the Central Committee of the Party, deprived of all posts in the army and sent into forced retirement.
The boy was born on November 19, 1896 into a poor peasant family in the village of Strelkovka, Kaluga Region.
Georgy received only primary education – three classes of the parish school. Then the boy was sent to Moscow, where he became an apprentice in a small furrier’s workshop. By the age of 13, he was already an excellent master. The teenager attended evening general education courses and received a certificate of maturity.
When the First World War began, Georgy was sent to the cavalry regiment. Curiously, thanks to his education, he could go to the school of ensigns and become an officer. But he was ashamed to command experienced soldiers at the age of 19, so he refused. As Marshal Zhukov later said, it was a happy thought, otherwise after the revolution he would have to emigrate. Participating in the fighting, the young cavalryman was wounded, partially lost his hearing, but performed a number of exploits. For the capturing of the German, the future commander was awarded the St. George cross.

During the Civil War, Georgy joined the Red Army and fought with the troops of Anton Denikin and Peter Wrangel. In 1920, Zhukov finished the Ryazan Cavalry courses and became commander of a platoon, later – a squadron. It was his unit that was engaged in suppressing the peasant rebellion near Tambov, the so-called Antonov uprising. For a successful operation Zhukov was presented to the Order of the Red Banner. In the mid-1920s, Georgy became a teacher at the Belarusian State University.
On the eve of the Great Patriotic War, the Politburo appointed Georgy Konstantinovich chief of the General Staff.
In 1940, Zhukov was appointed commander of the Southern Front. The troops were preparing to enter the territory of Bessarabia. Zhukov prepared two plans in case of a peaceful and a military solution of the Bessarabian question. Soviet troops occupied Bessarabia. On August 2 the Moldavian SSR joined the USSR. During the Second World War, it is especially worth highlighting the fighting on the Western Front and commanding the breakthrough of the Siege of Leningrad. Commander Zhukov ordered to shoot all those who dropped weapons, because of which he was later glorified brutal commander, but his actions made progress. Also Zhukov supervised the troops in the Battle of the Kursk Bulge and ideally conducted the offensive operation Bagration. 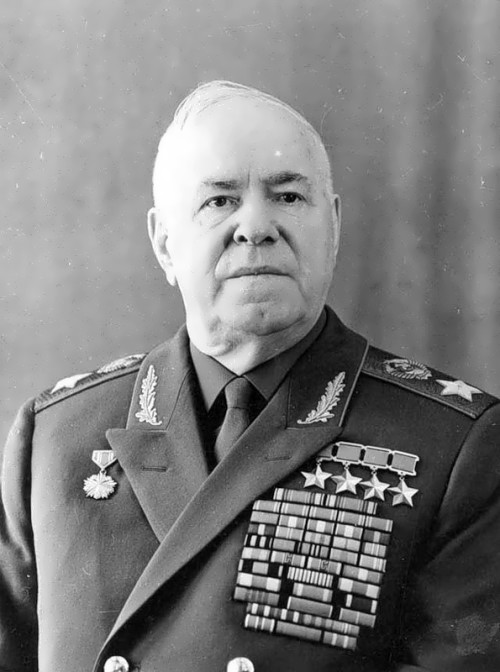 In early 1943 Georgy Konstantinovich was awarded the title of Marshal of the Soviet Union. He became the first officer awarded this title since the beginning of the war. As a marshal, he accepted the surrender of Fascist Germany, and also hosted the main Victory Parades in Moscow in 1945 on Red Square and in Berlin at the Brandenburg Gate.
A year later, the famous “Trophy Case” took place, during which the legendary Marshal of Victory was accused of illegally appropriating various luxuries. Zhukov admitted that he had actually brought a lot of furniture, carpets and other fashionable items from Germany, and repented that he had not informed his superiors about this. As a result, he was transferred to the post of commander of the Ural Military District.
After Stalin’s death, the commander was returned to Moscow and, by order of Nikita Khrushchev, was appointed First Deputy Minister of Defense. According to most researchers, Marshal Zhukov became one of the key figures in the suppression of the Hungarian anti-communist uprising in 1956 and conducted a rather bloody operation Whirlwind. After it, Khrushchev was frightened of the great influence of the defense minister on the public and the military leaders, so he told Zhukov to resign. 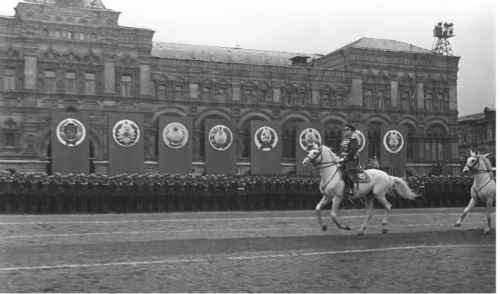 Personal life
There were a lot of myths about personal life of Zhukov. Therefore, it is worth talking about only those romantic relationships, which he confirmed himself.
For the first time Zhukov could have married in his youth. He had a love affair with the daughter of an apartment owner in Moscow. But because of the First World War those plans had sunk into oblivion.
In 1919, in the Saratov hospital, Georgy met nurse Maria Volokhova. However, because of the military actions, the young people broke up.
A year later, the future marshal fell in love with a young teacher, Alexandra Zuykova. In 1953 they got married. And then Georgy Konstantinovich met Maria Volokhova again.
It is interesting that almost simultaneously the ladies gave birth to his children: Alexandra gave birth to daughter Era and Maria gave birth to his daughter Margarita. By the way, both wives of Zhukov knew about each other.
Later Volokhova got married and broke off relations with her lover. And the official spouse gave birth to daughter Ella.
During the Second World War, Zhukov lived with military paramedic Lydia Zakharova. She went with the marshal throughout the war. They parted only when Alexandra Zuykova came to visit her husband. As a result, Georgy Konstantinovich broke up with his mistress, but not because of his wife, but for the sake of military doctor Galina Semenova. In 1965 Georgy officially divorced Zuykova and married Semenova, who gave birth to his fourth daughter Maria.
All the daughters of Zhukov received an excellent education. Margarita graduated from the Faculty of Law and Economics of the Moscow State University. For more than 40 years she taught political economy in various metropolitan universities. Actually, she is the founder of the Marshal Zhukov public fund. Era and Ella graduated from MGIMO. The eldest of them was an employee of the Institute of State and Law of the Russian Academy of Sciences, and the younger one became a journalist. And Maria Georgievna wrote and published the well-known book Marshal Zhukov Is My Father. 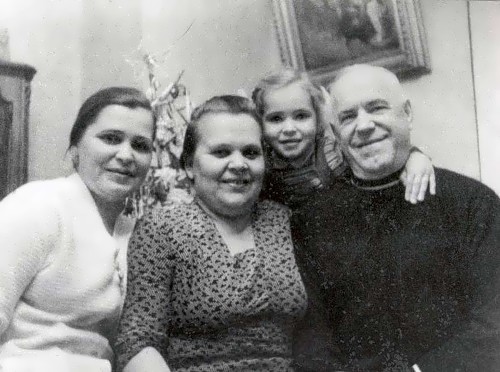 Zhukov and his family

Zhukov became a knight of more than 60 awards for the various countries of the world. One of the rarest and most honorable was Order of the Bath. In the history of this award the British awarded very few foreigners, including two Russian generals. The first one was Mikhail Barclay de Tolly and Zhukov became the second. Zhukov was awarded the American Legion of Merit medal.
Towns and educational institutions were named after Zhukov. The Order of Zhukov was established in 1994.

In the last years of his life, Zhukov visited the Kremlin Palace of Congresses again, where he was invariably met with prolonged applause. Also, the marshal was a consultant to the documentary If Your Home Is Dear To You and Pages of the Battle of Stalingrad, and he even starred in two episodes. Besides, the book of memoirs Memoirs and Reflections, on which Zhukov had been working for more than 10 years, was published.

Georgy Zhukov died in the hospital on June 18, 1974 after several weeks of being in a coma. Despite the last will of the commander about the traditional burial, his body was cremated, and ashes were buried in the Kremlin wall on Moscow’s Red Square. On the 100th anniversary of the birth of Marshal Zhukov a requiem was served for the first time in the history of the Kremlin necropolis. 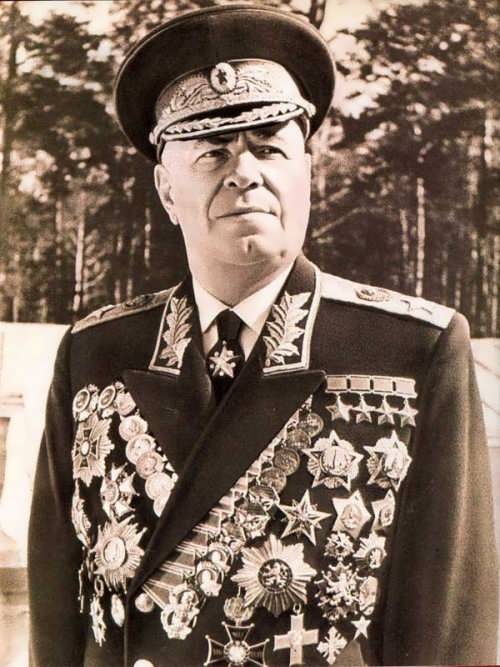 Brave soldier and devoted son of his country Georgy Zhukov 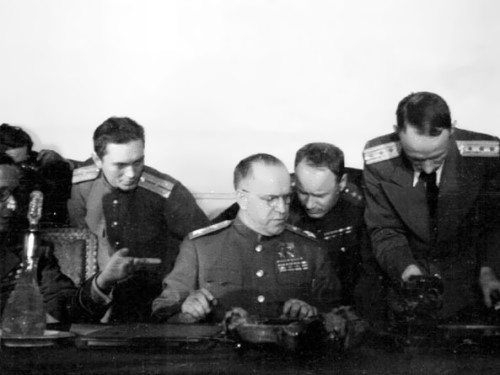 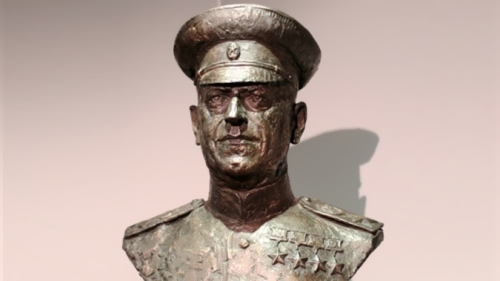 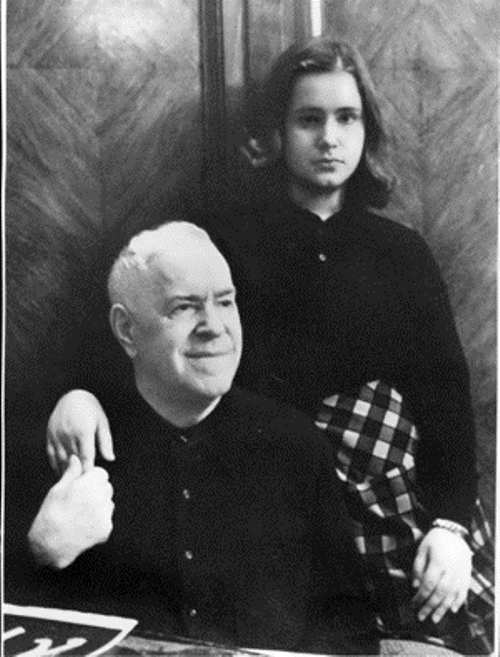 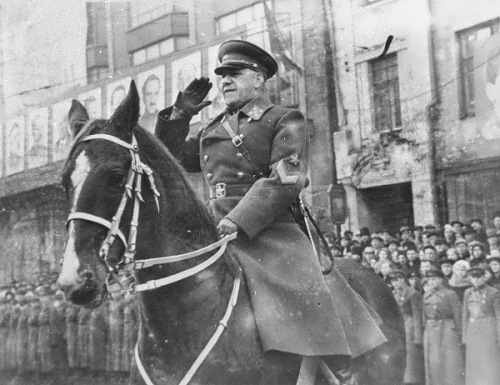 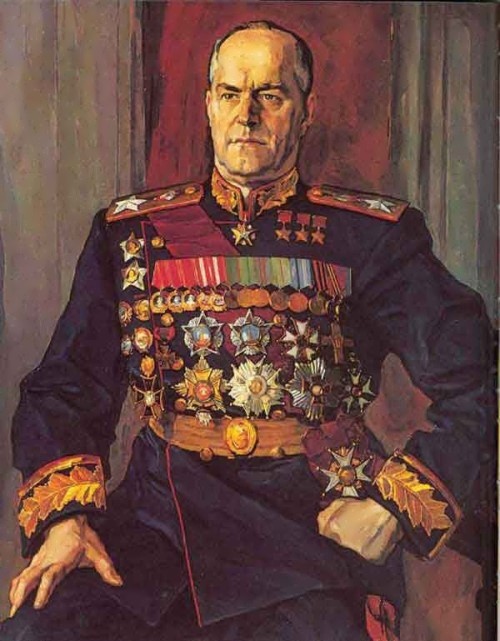 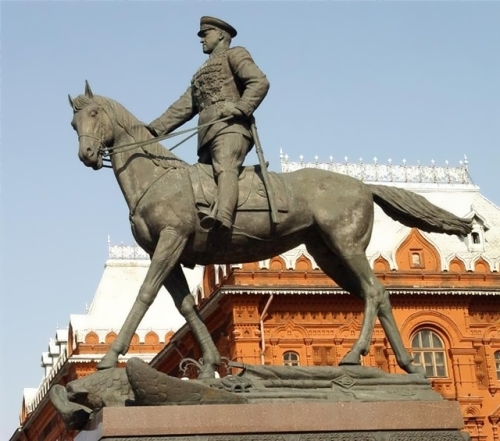 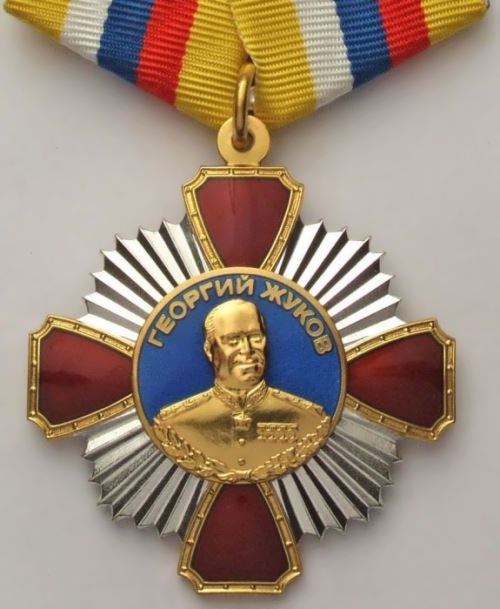 The Order of Zhukov 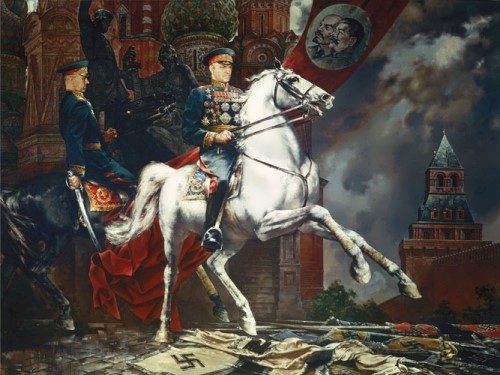 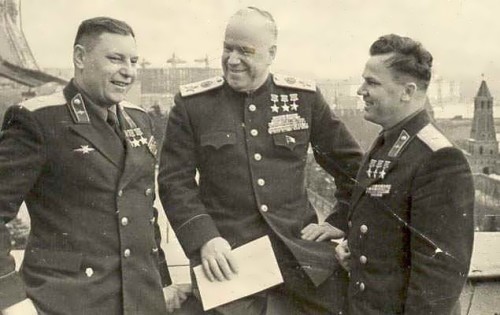 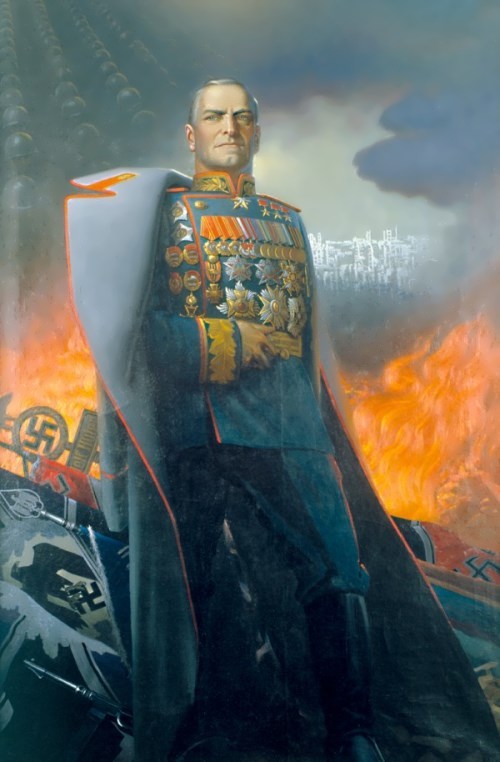 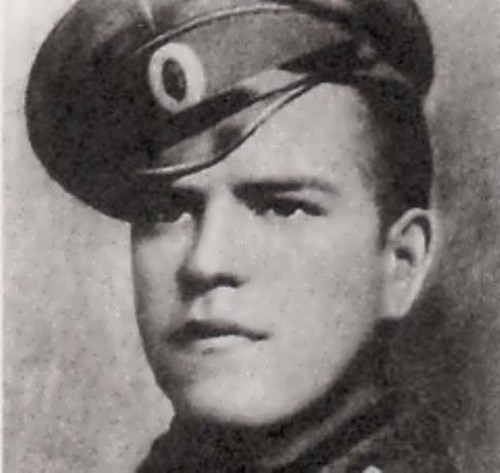 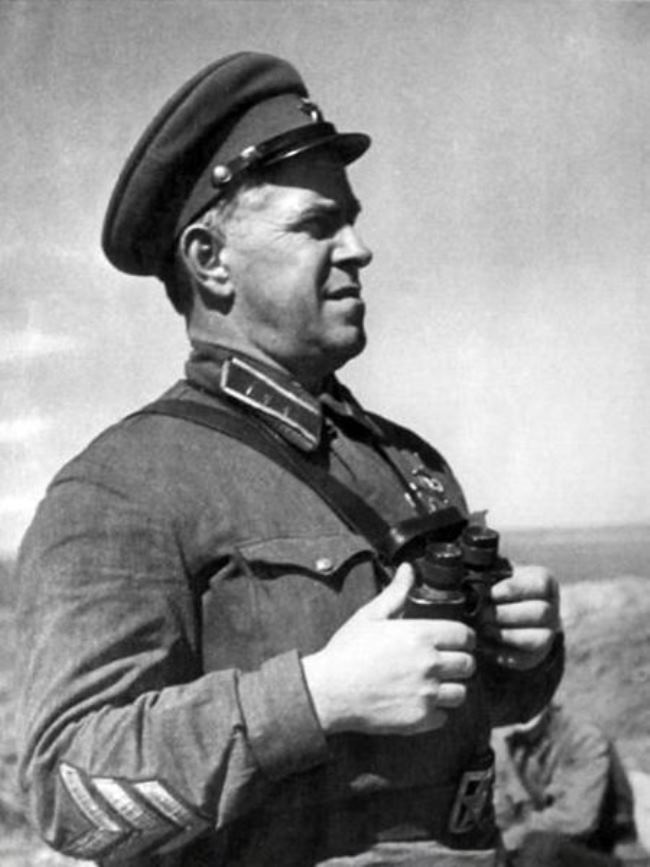 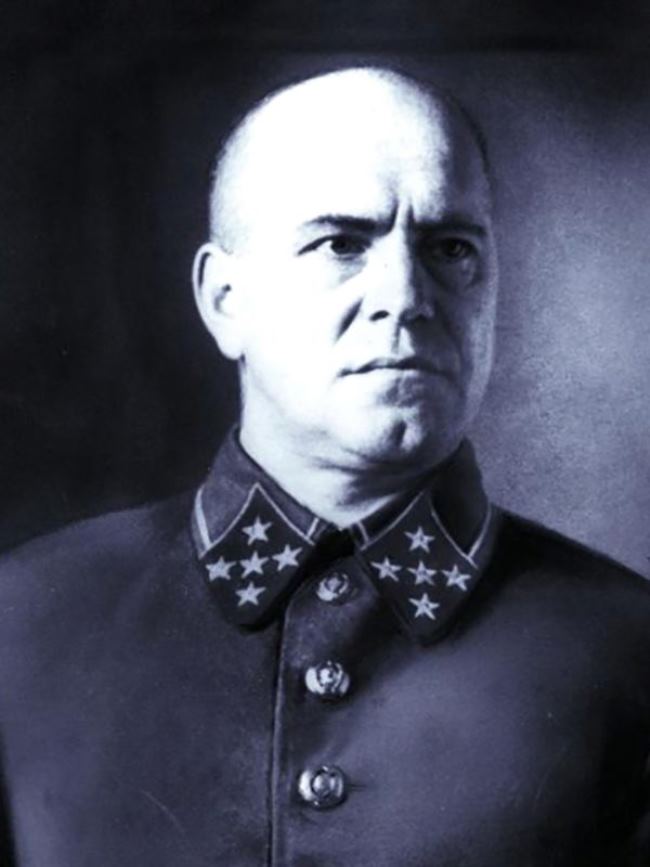 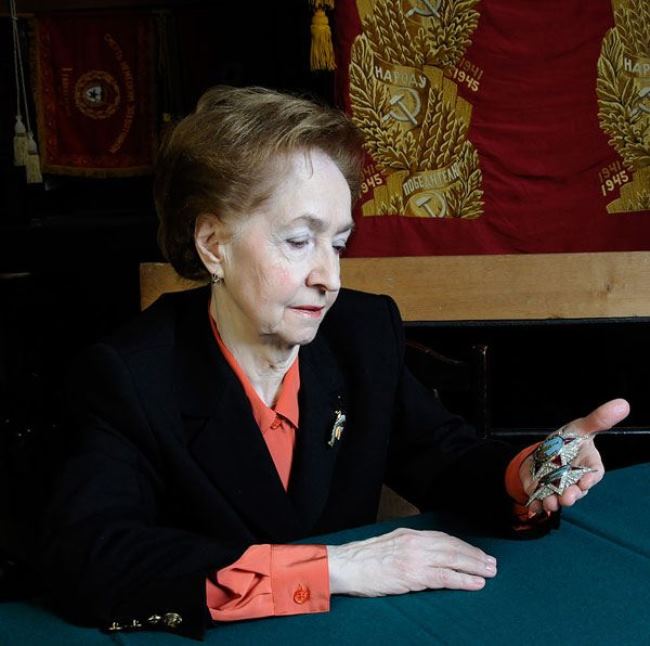 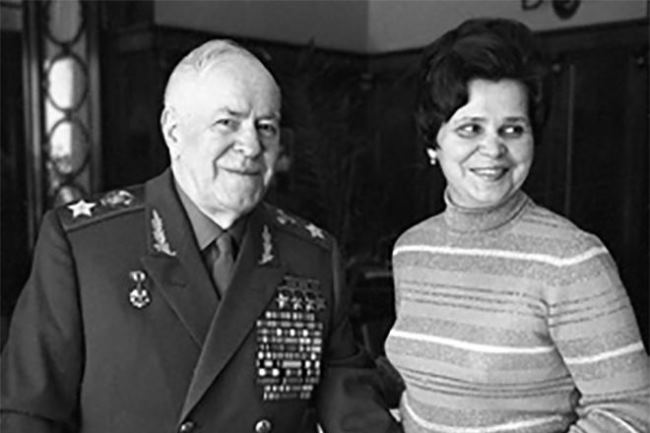 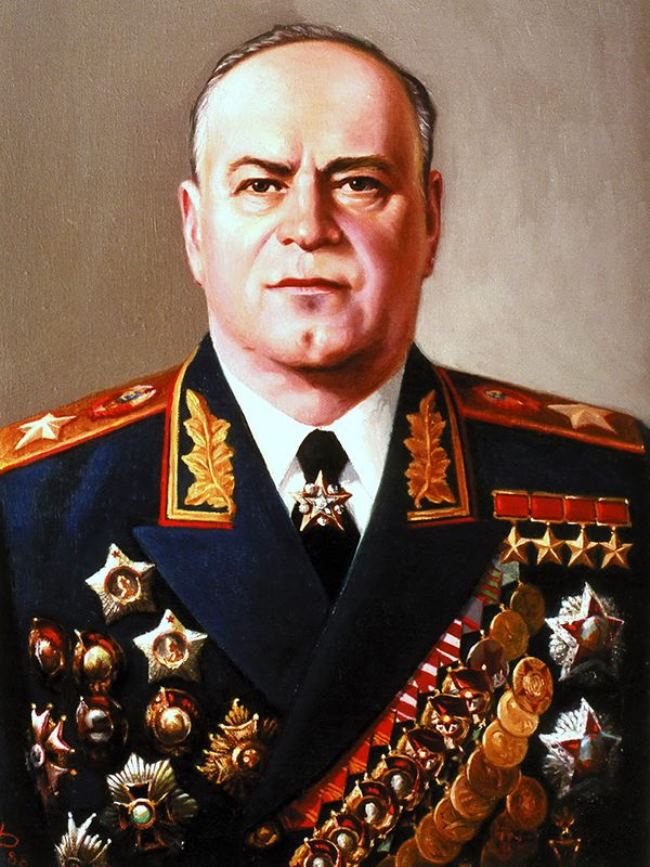 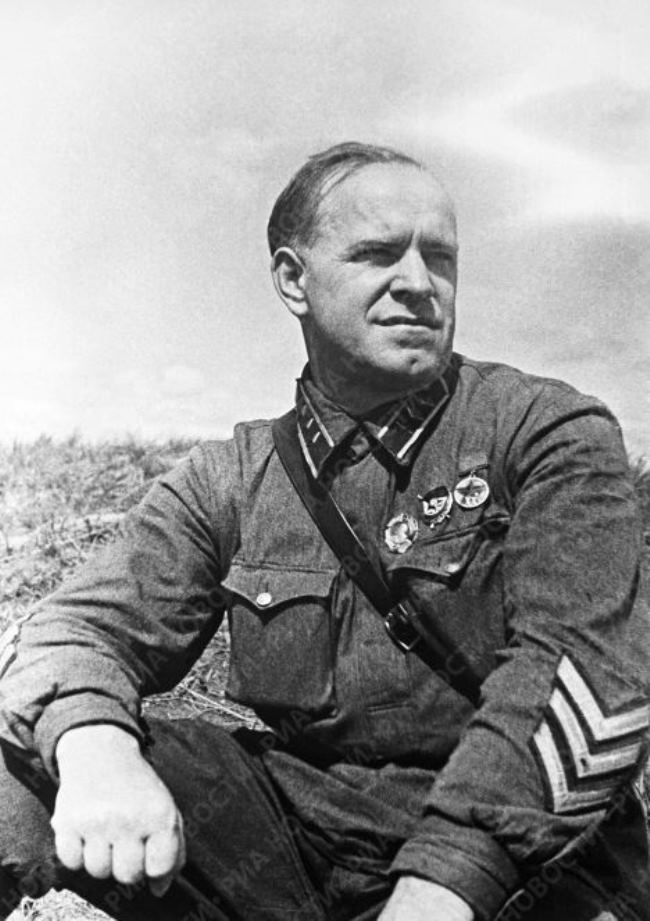 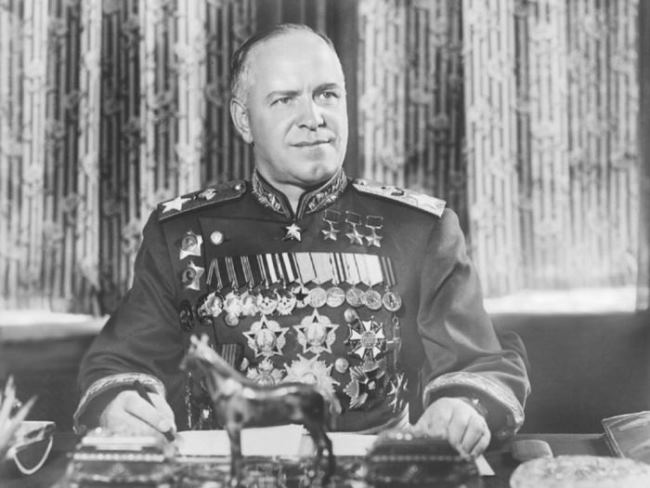 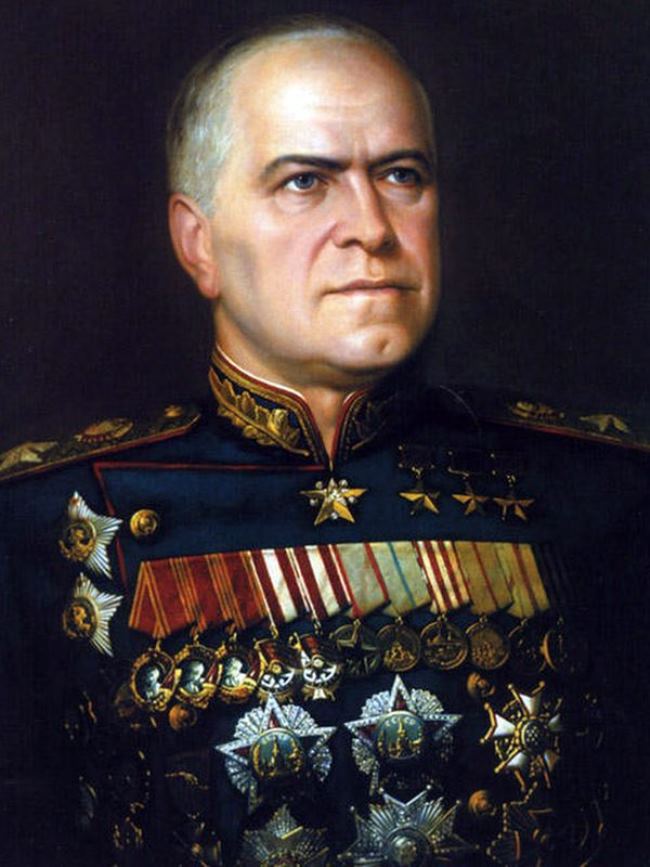 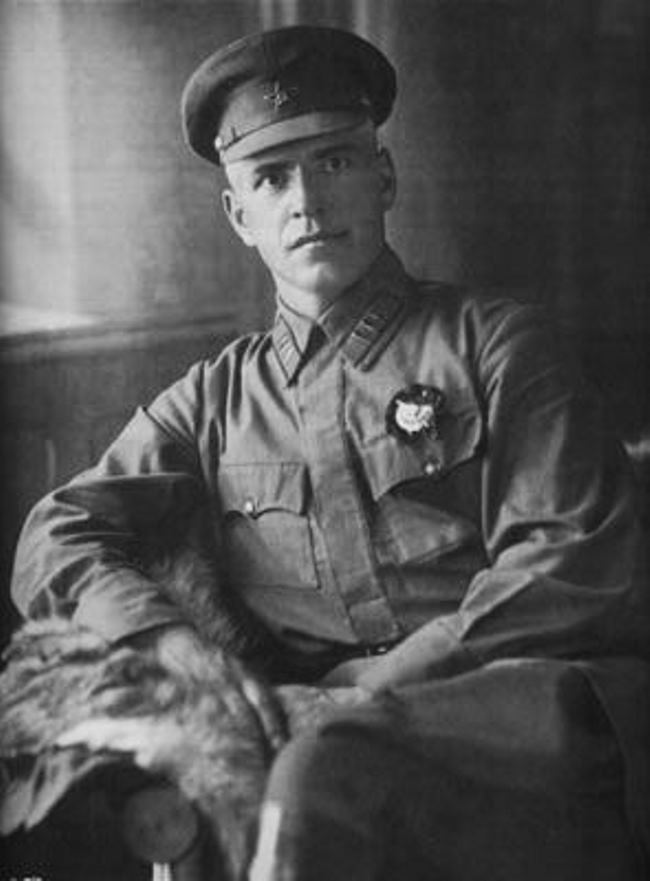