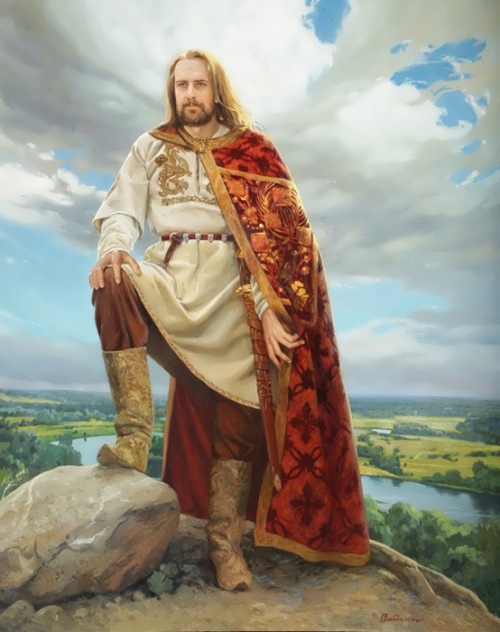 Yaroslav the Wise was Prince of Rostov (987-1010), Prince of Novgorod (1010-1034), Grand Prince of Kiev (1016-1018, 1019-1054).
He was a son of Prince Vladimir the Baptist of Russia and Princess Rogneda Rogvolodovna. You know, he was a father, grandfather and uncle of many rulers of Europe.
Actually, he went down in history as one of the most powerful rulers of Kievan Rus, the originator of the first known set of laws in Russia – Russian Truth (Russkaya Pravda). Russian Truth was one of the most important sources on the history of legal, economic and social relations in Russia.
The great merit of Prince Yaroslav was the victory over the Pechenegs. This happened in 1036. As the chronicles say, the city was besieged by nomads during the period when the ruler went to Novgorod. But having received news about the danger, he quickly returned and defeated the Pechenegs. Since that moment, their devastating and bloody raids on Rus briefly stopped.

The city of Yaroslavl was named in honor of the prince. According to one of the legends Yaroslav was traveling along the Volga from Novgorod to Rostov. On his way the prince was attacked by a bear and with the help of his druzhina killed the animal. Then he ordered to build a small wooden fortress and called it Yaroslavl. And now you can see the bear on the coat of arms of the city.
Besides, Yaroslav is known as the founder of the cities. He founded Yuriev (now Tartu in Estonia), Yuriev Russkiy (now Bila Tserkva in Ukraine), Novgorod-Seversky (now in the Chernihiv region), Yaroslavl in the Carpathian region (now Yaroslav), and, of course, Yaroslavl, built on the Volga River.
Moreover, first Russian monasteries appeared during his reign. In 1030 Yaroslav founded the monasteries of St. George: St. George Monastery in Novgorod and Kiev Monastery of the Caves.
In 1028 the first school was founded in Novgorod, Yaroslav the Wise came to teach reading and writing to the children of religious and senior officials.
Novgorod State University and Kharkov Law University were named after Prince, as well as a state award of Ukraine – Order of Prince Yaroslav the Wise. 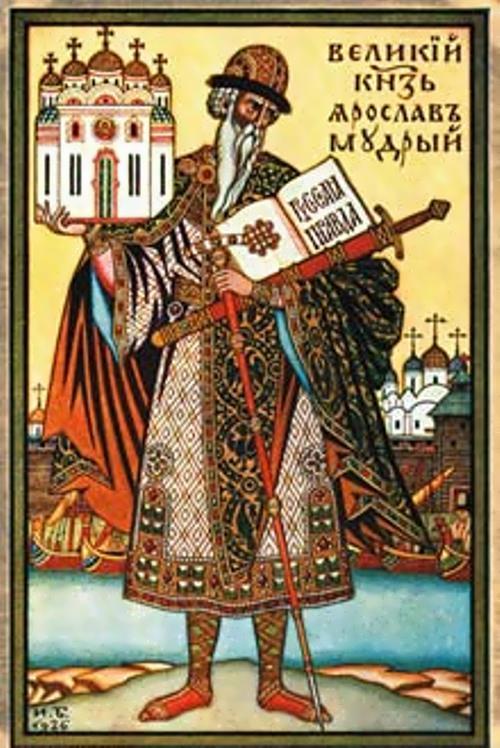 There was a coin Yaroslavl silver, on one side of it Jesus Christ was portrayed, on the other – St. George, the patron of Yaroslav.
You know, Yaroslav is portrayed on Russian banknote – 1000 rubles.
Yaroslav was actually one of the first combiners of Russian lands. He united almost all the Russian lands from the south and to the north under his rule. Rus was one of the most powerful and prosperous European states.
The Ruler made great efforts to interrupt the dependence of the Russian Orthodox Church on the Byzantine Empire. Therefore, in 1054, for the first time in the history of Russia, the church was headed by a Russian, not a Greek metropolitan. His name was Hilarion.
Yaroslav separated the church from the state, made it more independent from one side and defined and structured its powers and responsibilities, on the other. 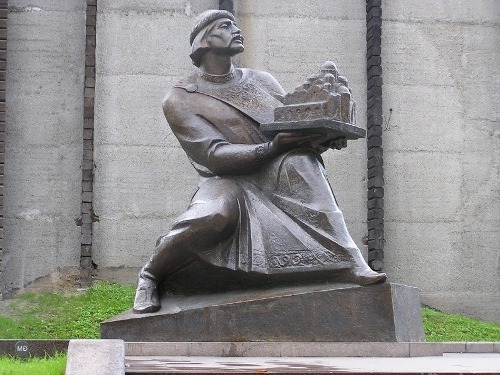 In the Tale of Bygone Years (Primary Chronicle) it is said about a certain collection of books and documents – the Library of Yaroslav the Wise. According to some reports, the library was transferred by the prince (according to other sources by his great-grandson) to St. Sophia Cathedral. Since ancient books are not found in a thousand years, there are many hypotheses where they can be stored. Some argue that they may be in dungeons of the St. Sophia Cathedral, others speak about the catacombs of the Kiev-Pechersk Lavra, the third – about the Vydubitsky Monastery.
Another version, which has the right to exist, the Library of Yaroslav the Wise became part of the no less legendary Library of Ivan the Terrible.
What is more, Yaroslav was canonized by the Orthodox Church. Some of his relatives were also canonized – his father – Prince Vladimir Svyatoslavovych (Vladimir the Red Sun), his brothers Saints Boris and Gleb, his son Vladimir Yaroslavovich, grandchildren Vladimir Monomakh and Hugh the Great.

The date of death of the prince is considered February 20, 1054. He was buried in the St. Sophia Cathedral in Kiev, in a 6-ton marble sarcophagus. Unfortunately, the remains of the great ruler disappeared.
Many historians and researchers believe that the remains should be sought in the United States. Allegedly they were taken there in 1943, when the German troops retreated.

His wives and children
His first wife, presumably, was Norwegian named Anna. In 1018 she and Yaroslav’s sisters were captured by Polish King Boleslaw the Brave and were taken to Poland.
Ingegerda, daughter of the King of Sweden, became his second wife. She is also known as Irene, Anna and St. Anna. 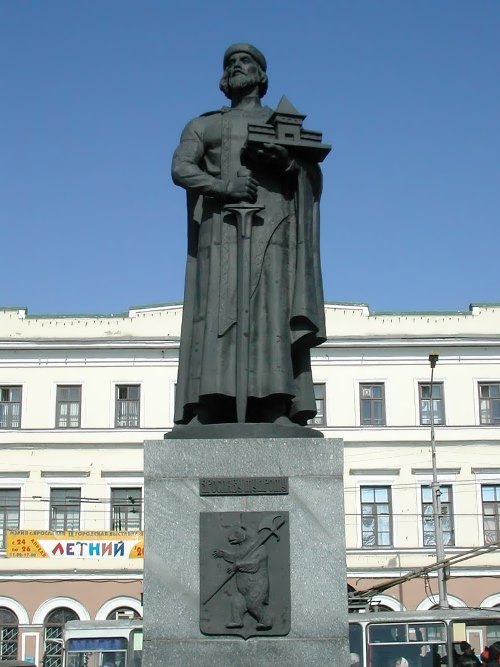 Monument to the Grand Prince in Yaroslavl

Daughters
Elizaveta became the wife of the Norwegian King Harald the Terrible (or Harald the Horrible).
Anastasia became the wife of the King of Hungary Andras I. The church in Tihany on the shore of Lake Balaton was named in their honor.
Anna married the King of France Henry I. In France, she became known as Russian Anna or Anna of Kiev. There is a monument to Anna in the town of Senlis, France.
Some historians believe that Yaroslav had one more daughter named Agatha, who became the wife of Edward the Exile, heir to the throne of England.
Source: slovari.yandex.ru 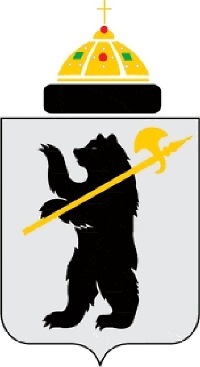 Coat of Arms of Yaroslavl 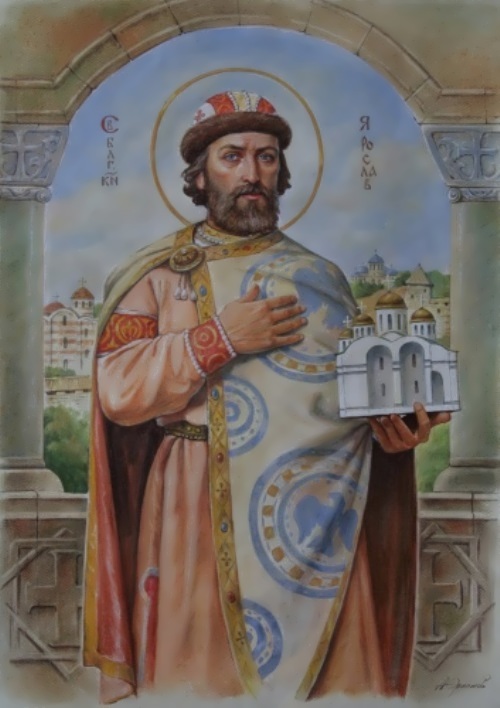 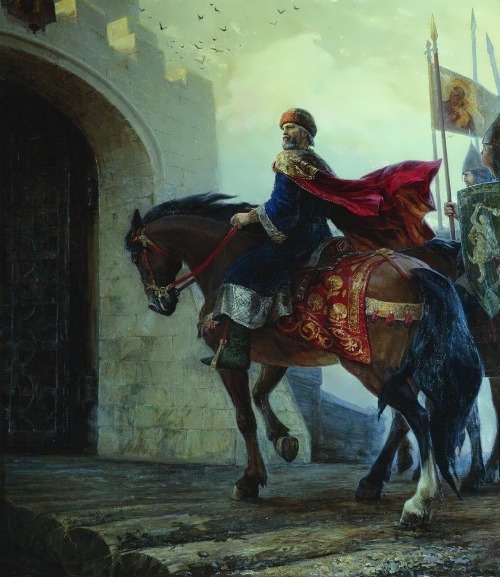 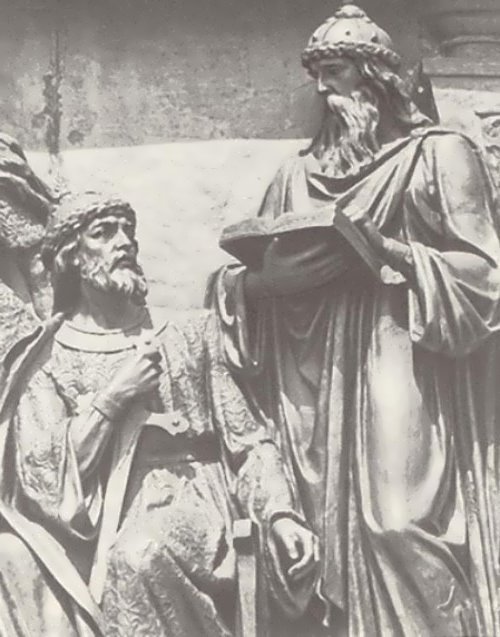 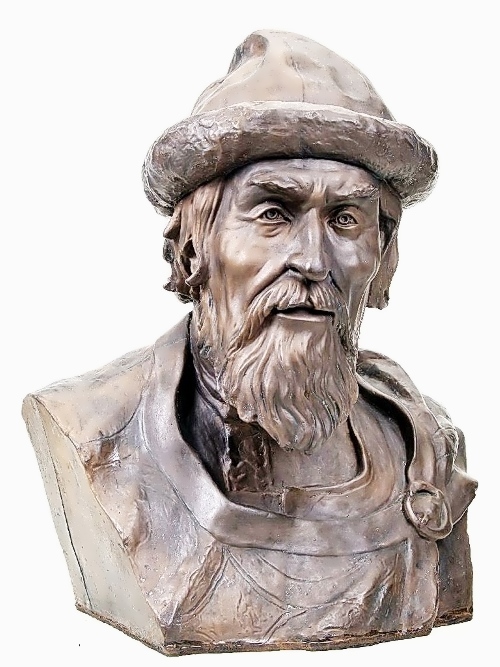 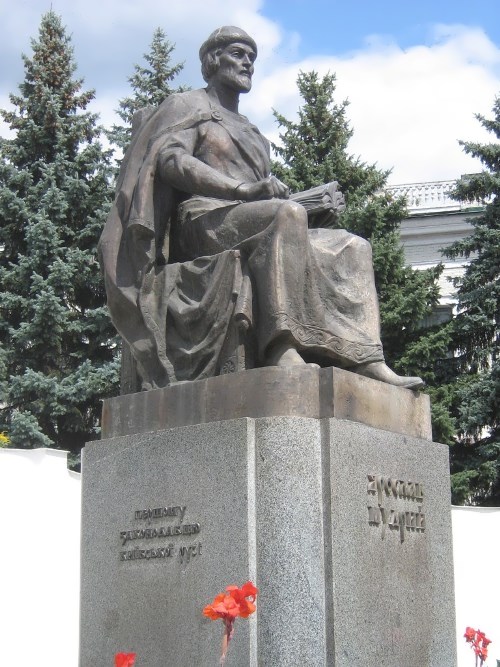 Monument to Yaroslav the Wise 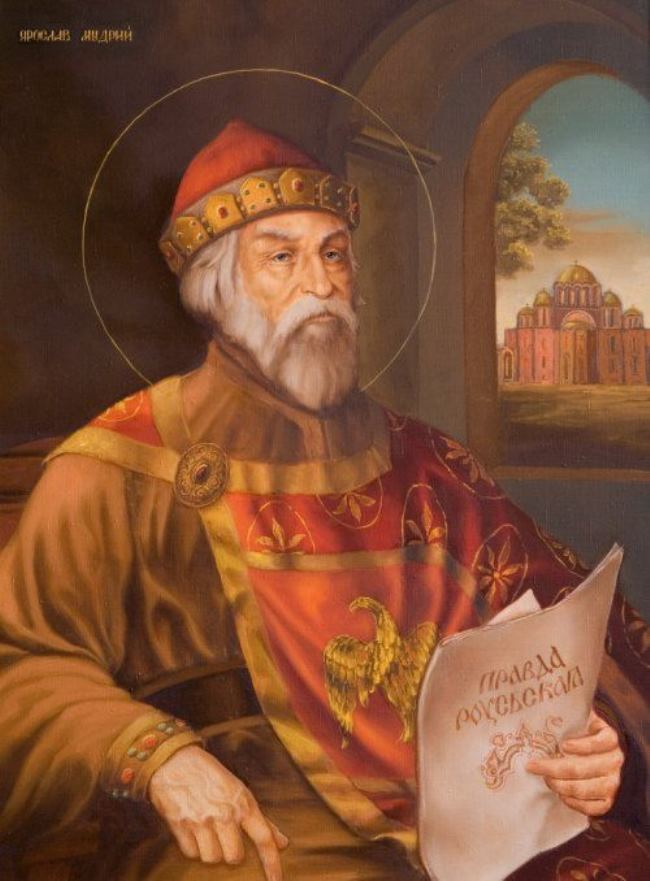 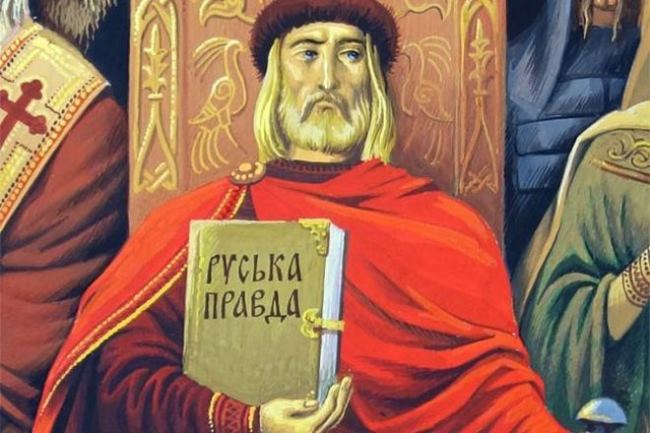 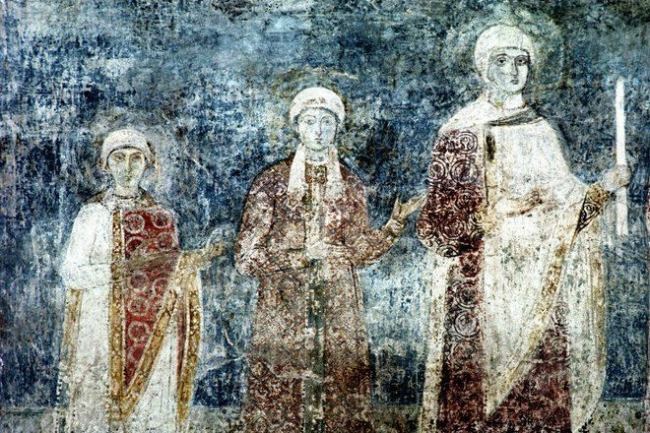 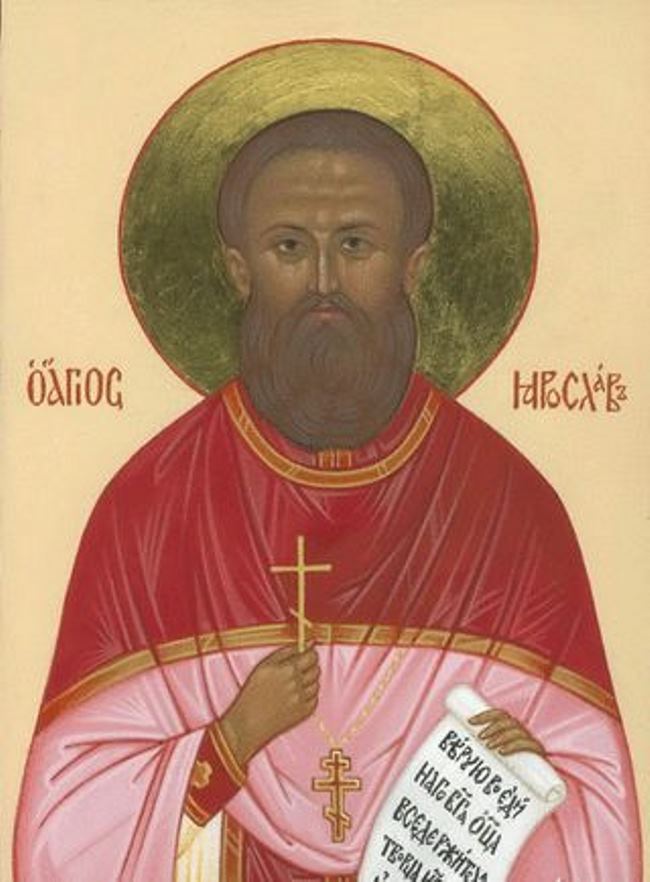 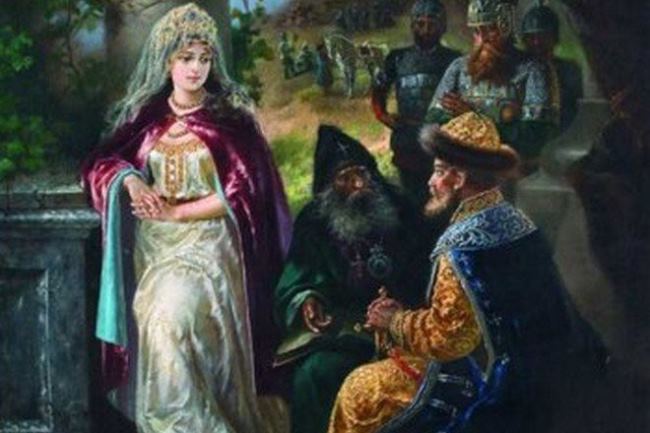 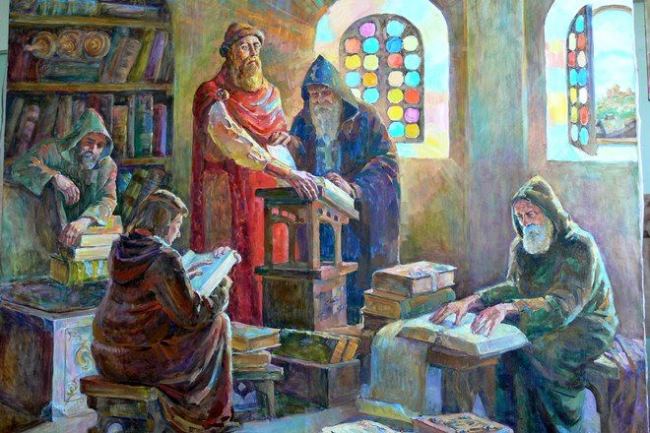 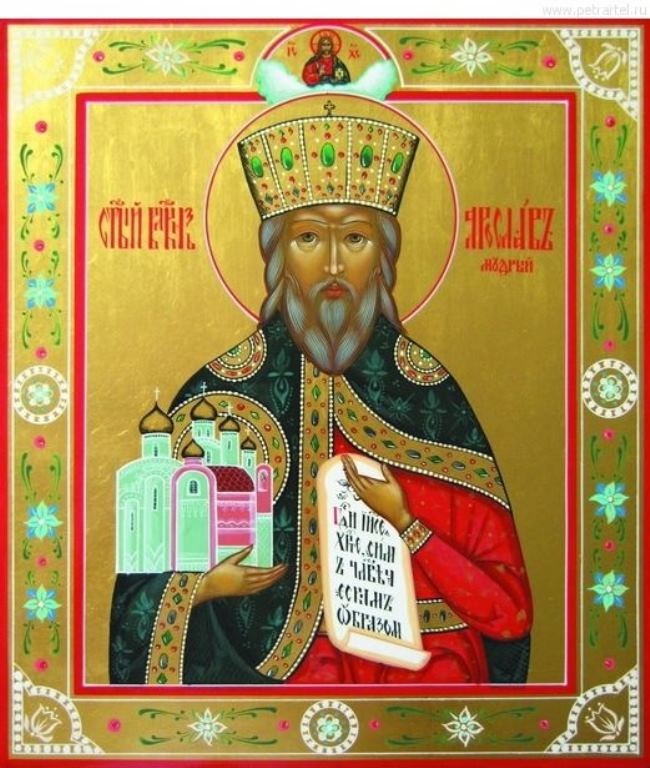 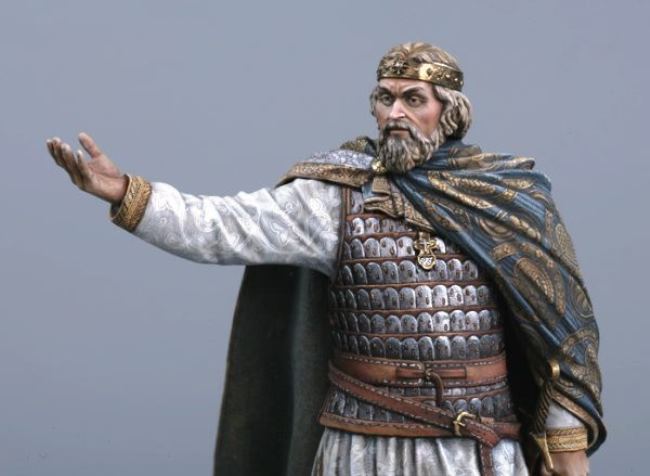 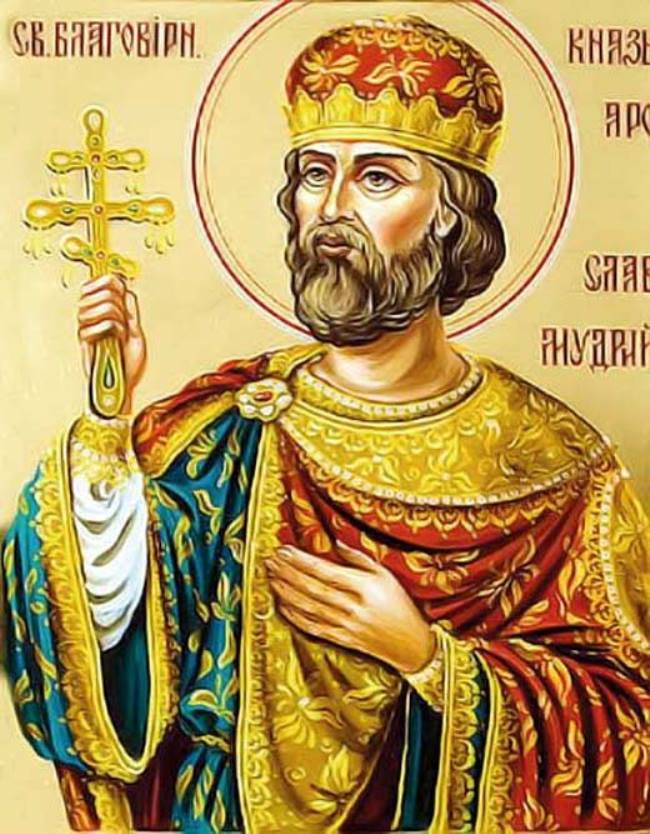 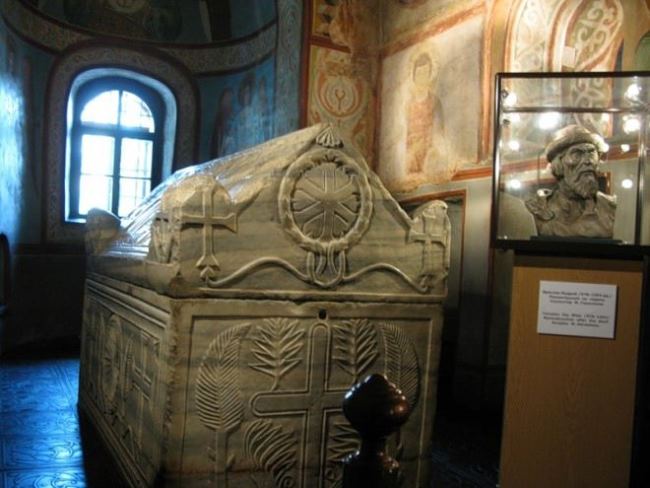 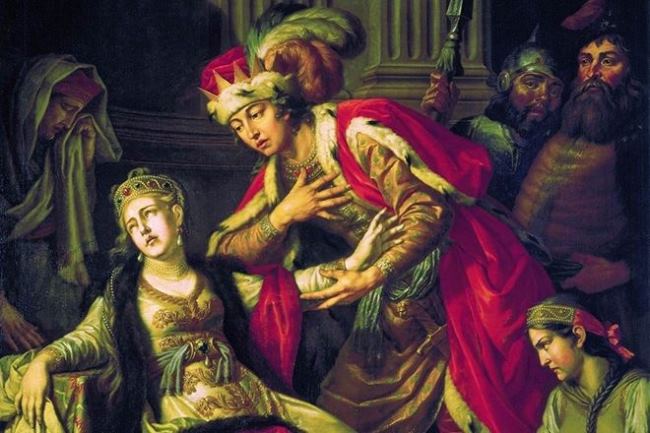 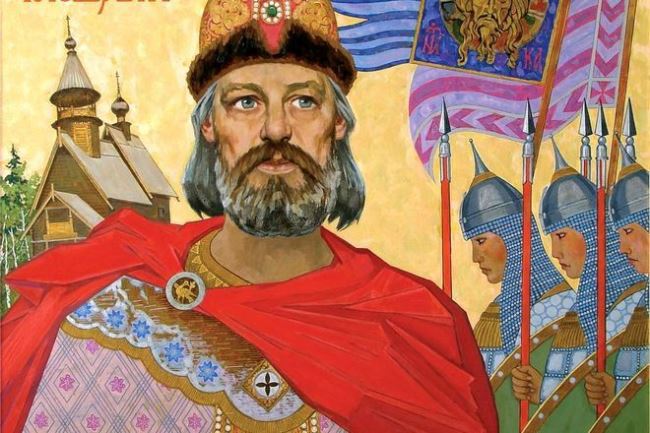 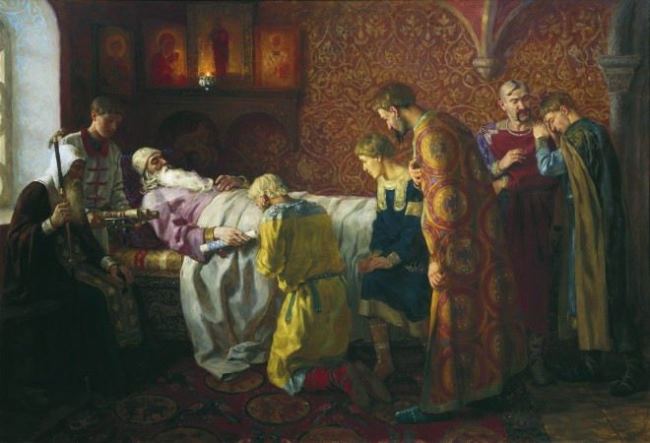 Yaroslav the Wise on his deathbed