Three prodigy girls, who lived in Soviet times, were Nadia Rusheva, Sasha Putrya and Nika Turbina. They had a similar fate. Bright, talented, they left this world too early, leaving behind a rich heritage – drawings and poems.
Here are some facts on Soviet indigo children.

Nadia Rusheva
Nadia was born in 1952 in Mongolia, Ulaanbaatar. When she was six months, her parents, artist Nikolai Rushev and prima ballerina Natalia Azhikmaa-Rusheva, moved to Moscow. Nadia started drawing at the age of five. Her father decided to give his daughter freedom of creativity and didn’t teach her how to draw. 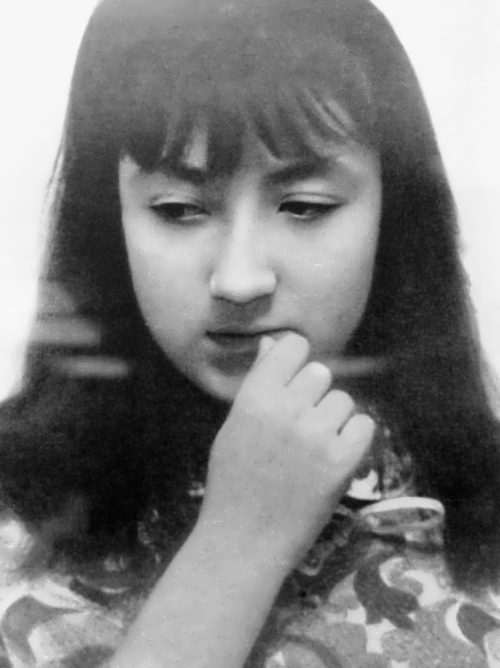 Drawing became her favorite pastime. Nadia didn’t not use an eraser (drawings that she did not like, she simply threw away).
One evening while her father was reading aloud The Tale of Tsar Saltan, Nadia drew 36 illustrations.
Rusheva said: “For me drawing is the need”.
In total, she left behind more than 10 thousand pictures – light and elegant. She illustrated books, personal stories, music.
Nadia devoted three hundred pictures to her favorite poet and writer Alexander Pushkin.
Since childhood, surrounded by admiration, she was the most ordinary girl – played with dolls, loved to ski, visited museums, dreamed of entering the Film Institute to make cartoons. The first exhibition of the artist, organized by the magazine Youth, took place when she was 12 years old. During the following five years 15 solo exhibitions were held not only in her home country, but also in Poland, Czechoslovakia, Romania, India.
After her death Nadia’s illustrations to Bulgakov’s novel Master and Margarita were shown to the widow of the writer Elena Sergeevna. She was shocked: a ring on the finger of the Master was a replica of the Bulgakov family signet, and the portrait of Margarita was much like an old photo of Elena Sergeevna.
On the eve of the day of her death Nadia and her dad returned from Leningrad. The girl was making plans: Master and Margarita I’ve completed, War and Peace too. Pushkin’s biography, perhaps, too… I will continue with Lermontov, Nekrasov, Blok, Yesenin, Green… And, of course, Shakespeare! Bring me Don Quixote from the library. I see a new cycle.” 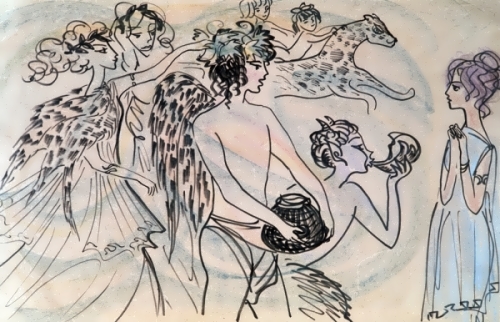 The next morning, on March 6, 1969, Nadia died. She was only 17 years old.
Shortly before, Rusheva was walking with a friend down the street and saw a funeral procession: “It’s so hard when people die, and suddenly this music. If I die, I would like to be buried in Artek uniform and people should listen to The Beatles.”
And so it happened. 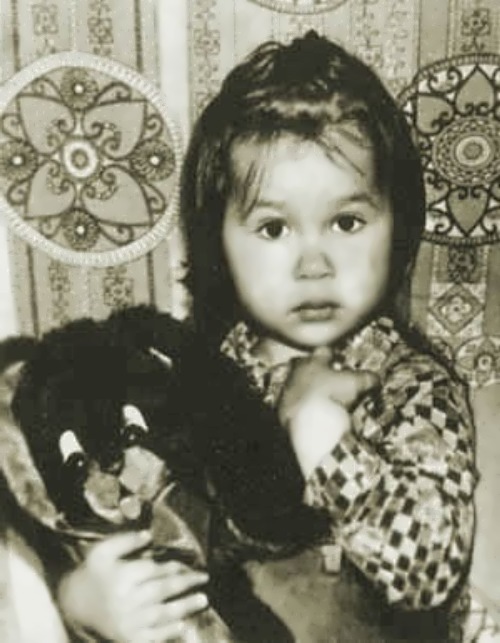 Sasha was born in Poltava, eight years after Nadia Rusheva’s death, in 1977 into the family of an artist and a musician. The girl knew about Nadia and saw a catalog of her works.
Irony of Fate – after Sasha’s death drawings of two brilliant girls met in one exhibition, in 1991 – in Novosibirsk, and 16 years later – in Roerich Museum in Moscow.
Sasha left behind 2279 works: 46 albums with drawings, cartoons and poetry, embroidery, handicrafts made of clay, soft toys, burnt wood paintings. She even made technical drawings, thanks to which, in her opinion, people could reach the moon and build roads without asphalt pavement cracks.
The girl began drawing at the age of three. “When I am big, I’ll certainly become an artist and will draw from morning till evening. Even at night.”
Five-year-old Sasha was diagnosed with acute leukemia. The family struggled with the disease for six years.
Sasha drew a little icon of the Mother of God for Pushkarevskaya church. The little girl was fond of India. She fell in love with it after the film Disco Dancer. In the midst of the disease, she was fascinated by astrology, horoscopes, UFOs.
On January 22, at the hospital, she drew her latest work – Self-Portrait and then asked her parents to let her go. 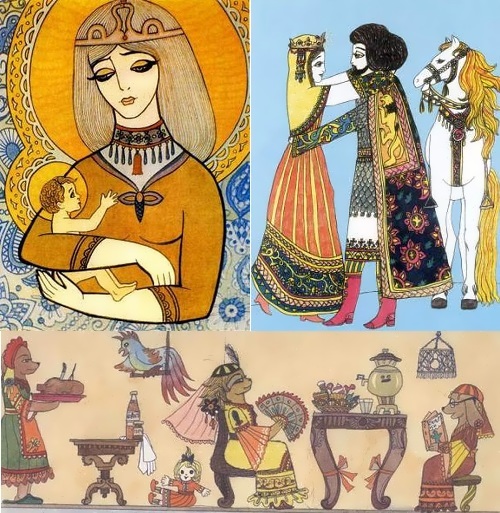 She died on January 24, 1989. Her last words were: “Dad? .. Forgive me… For everything…”
From 1989 to 2005 112 solo exhibitions were held in ten countries. In Austria, an envelope with a picture of Sasha was released. Five documentaries about Sasha were filmed. Posthumously, she was awarded various medals and won the prize of All Indian National Association of Child Nehru Bal Samiti – Kalasari. 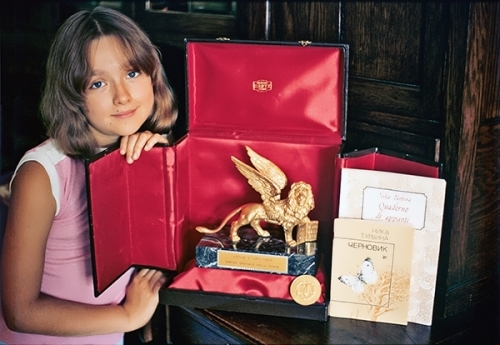 Nika Turbina and her Golden Lion. 1988

Brilliant poet was born in 1974 in Yalta. Nika was sick with asthma and was afraid to sleep because of asthma attacks. At night, she sat up in bed, breathed hoarsely and murmured something in her own language. And then the words began to form a poetry. Nika called adults and demanded: “Write”. A voice that dictated her lines, the girl called Sound.
Later in the interview Nika admitted: “Poems come suddenly. When I am strongly hurt or scared. It’s like childbirth. So my poems carry the pain.”
On March 6, 1983 Nika’s poems were printed for the first time. Nine-year-old schoolgirl met with Yevgeny Yevtushenko, who helped to arrange her travel around the country. She was called Mozart of Poetry.
In 1984, thanks to Yevtushenko, her collection of poems Draft was published. Her work was translated into twelve languages.
12-year-old girl became the second, after Anna Akhmatova, Russian poet, awarded a prestigious award in the field of art – Golden Lion.
In 1989, Turbina played the role of the girl suffered from tuberculosis in the movie It Was By The Sea and took part in photo session for Playboy.
“If a person is not a complete idiot, he is occasionally in depression. Sometimes you just want to leave, close the door and send everyone to hell,” said Turbina. She struggled with loneliness in her own way: ran away from home, took sleeping pills and cut her veins.
To assert herself 16-year-old girl married 76-year-old professor from Switzerland. But soon Nika returned to Moscow, where she met her first love, and, inspired, entered the Film Institute. However, she was expelled for poor grades. After the break up with her boyfriend Turbina drank heavily. Then she found a new man, a businessman, but their relationship didn’t last long – he sent her to a mental hospital.
On May 15, 1997 Nika jumped off the balcony. She underwent twelve operations and had to relearn to walk.
On May 11, 2002 the girl jumped from the fifth-floor balcony. She died at the age of 27. Her body stayed in the morgue for eight days as unidentified one. She was buried by morgue workers. Later Turbina was reburied at the Vagankovsky cemetery opposite Igor Talkov’s grave. 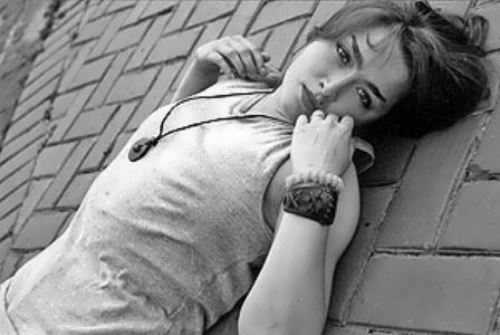