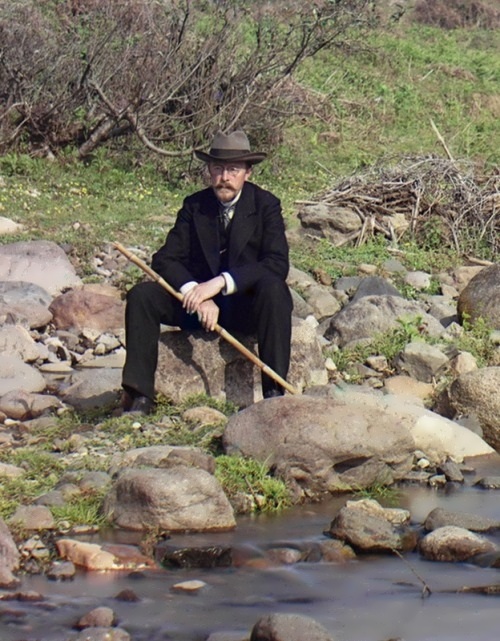 Sergey Prokudin-Gorsky was a Russian photographer, chemist (pupil of Mendeleev), inventor, publisher, educator. By the way, he was a member of the Imperial Russian Geographical, Imperial Russian Technical and Russian Photographic Societies. He made a significant contribution to the development of photography and cinematography.
To tell the truth he was a pioneer of color photography in Russia, the creator of the Collections of Sights of the Russian Empire.
This man devoted his entire scientific talent and tireless energy to one ambitious goal. He wanted to show the beauty and richness of the great country, which was called the Russian Empire, “in natural colors”.
The boy was born on August 30, 1863 into the family of Russian nobility. Prokudin-Gorsky studied chemistry under Dmitri Mendeleev in the Saint Petersburg State Institute of Technology. Also he studied music and painting at the Imperial Academy of Arts.
In 1889, he went to Berlin, where studied at the Technical University.
A year later, in 1890, he married Anna Aleksandrovna Lavrova (1870-1937), the daughter of a Russian metal expert.
In 1901, Prokudin-Gorsky established a photography studio and laboratory in Saint Petersburg.

Then he began to make reports on the technical results of his photographic studies to the Fifth Department of the Imperial Russian Technical Society. Already at that time he was the Russian authority in the field of photography and organized courses of practical photography.
In 1898 Prokudin-Gorsky published the first books in a series of works on the technical aspects of photography: On Printing From Negatives. Two years later, in 1900, the Russian Technical Society showed black and white photographs of Prokudin-Gorsky at the World Paris Exhibition.
Later he studied at a photomechanical school in Charlottenburg (near Berlin) under the direction of Dr. Adolphe Mite. You know, Mite created his model of a camera for color photos and a projector for demonstrating color images on the screen in 1902.
In April-September 1905, Prokudin-Gorsky made the first large photo trip around the Russian Empire, during which he took about 400 color photographs of the Caucasus, the Crimea and Ukraine.
From April to September 1906 he spent a lot of time in Europe, participating in scientific congresses and photo exhibitions in Rome, Milan, Paris and Berlin. He received a gold medal at the International Exhibition in Antwerp and a medal for Best Work in the field of color photography from the photo club in Nice. 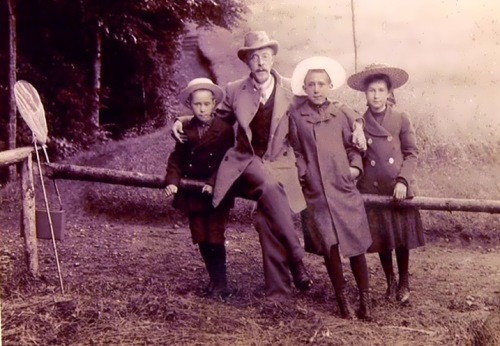 Prokudin-Gorsky with his children

In December 1906, Prokudin-Gorsky first went to Turkestan to photograph the solar eclipse on January 14, 1907 in the Alai mountains near the station Chernyaevo (now Khavast). Although the eclipse could not be photographed due to the clouds. And in January 1907 Prokudin-Gorsky took many color photographs of Samarkand and Bukhara.
Later, in May 1908, the photographer went to Yasnaya Polyana, where he took a series of photographs, including several color portraits of Lev Nikolaevich Tolstoy. In addition, he took two pictures of Fedor Shalyapin in stage costumes.
On May 30, 1908 there was an exhibition of his photos at the Academy of Arts. His pictures of ancient vases – exhibits of the Hermitage – were subsequently used to restore their lost color.
Sergey was invited to show his works to the Tsar’s family in 1909.
In 1909-1916 Prokudin-Gorsky traveled a significant part of the Russian Empire, taking pictures of ancient temples, monasteries, factories, people.
To celebrate the centenary of victory in the Patriotic War of 1812, Prokudin-Gorsky photographed the places connected with the Napoleonic campaign in Russia. 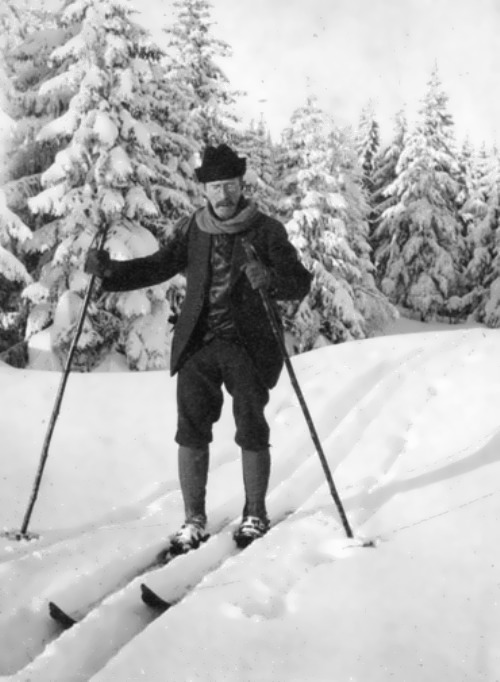 With the outbreak of the First World War, Prokudin-Gorsky created photo chronicles of military operations, but subsequently he was forced to abandon further experiments and was engaged in censorship of foreign films.
In the summer of 1916 Prokudin-Gorsky made his last photo expedition – he photographed the newly constructed southern section of the Murmansk Railroad and the Solovetsky Islands.
Shortly after the October Revolution of 1917, he participated in the creation of the Higher Institute of Photography and Photographic Technology. His last collection of photographs was demonstrated in Russia on March 19, 1918 in the Winter Palace.
After the revolution of 1917, Prokudin-Gorsky went abroad.
In 1920-1922 Prokudin-Gorsky wrote a series of articles for the British Journal of Photography.
After moving to Nice in 1922, he worked with the Lumiere brothers. Until the mid-1930s, the photographer was engaged in educational activities in France and was even going to make a new series of photographs of artistic monuments of France and its colonies. This idea was partially realized by his son Mikhail Prokudin-Gorsky.

Great photographer died on September 27, 1944 in Paris, France, a few weeks after the liberation of the city from the Nazi troops by the Allies. 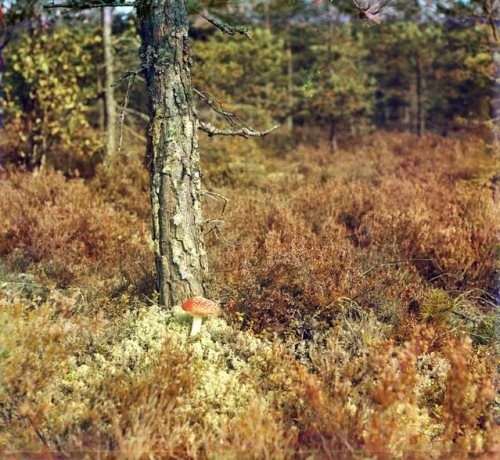 The United States Library of Congress purchased the material from Prokudin-Gorsky’s heirs in 1948. And in 2001 an exhibition The Empire That Was Russia: The Prokudin-Gorsky Photographic Record Recreated took place.
There are several films about the photographer: The Tsar’s Last Picture Show for BBC Four, Album for the prince. Photographer S. Prokudin–Gorsky, The Color Of Time, History In Color, Russia In Color.

The photographer had wonderful taste and travel desires. He had visited many places from Karelia to Bukhara and left for us huge cultural heritage: hundreds of color photos of excellent quality, which were taken more than 100 years ago.
Source: www.prokudin-gorsky.org 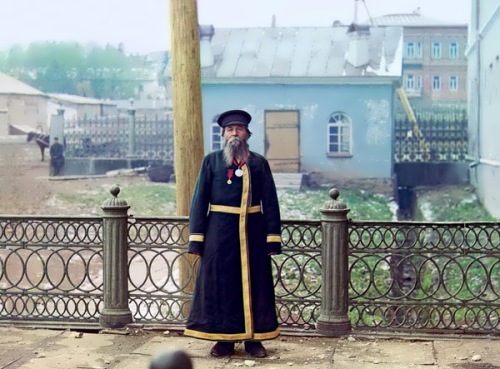 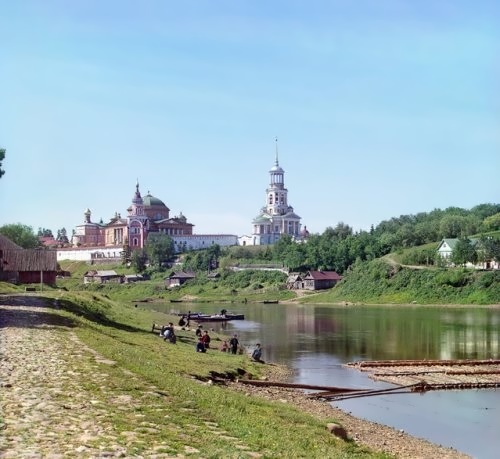 Boris-Gleb Monastery, from the bridge. Russia, the Tver province, Torzhok, 1910 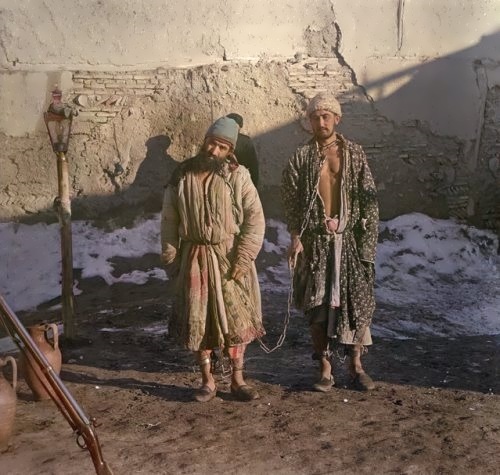 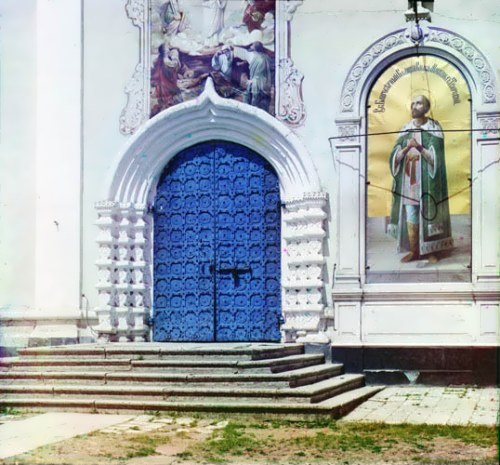 The gate on the south side of Preobrazhensky Cathedral in Tver 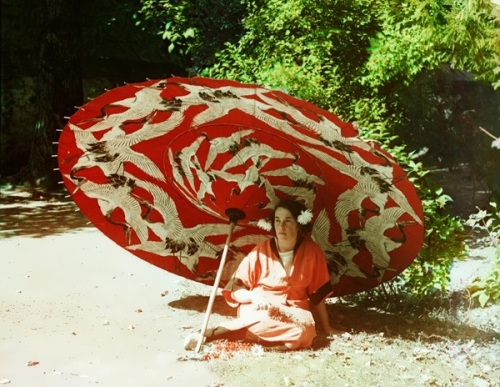 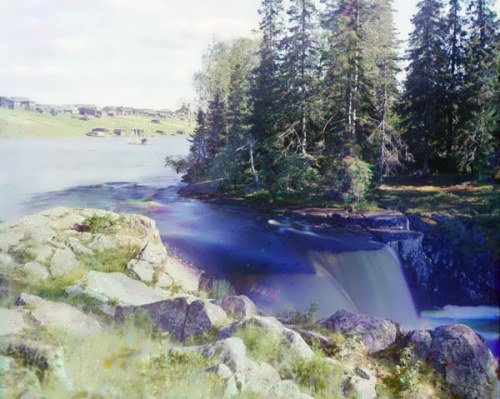 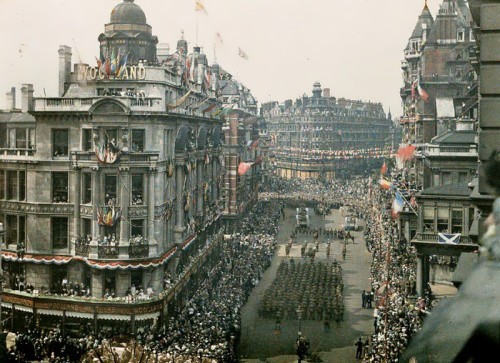 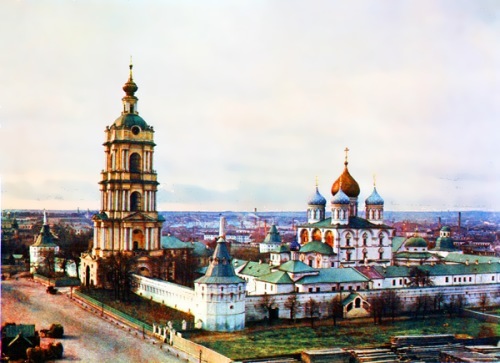 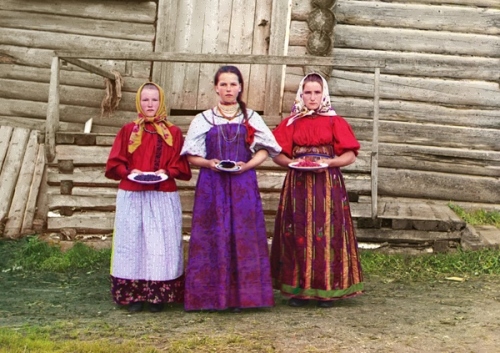 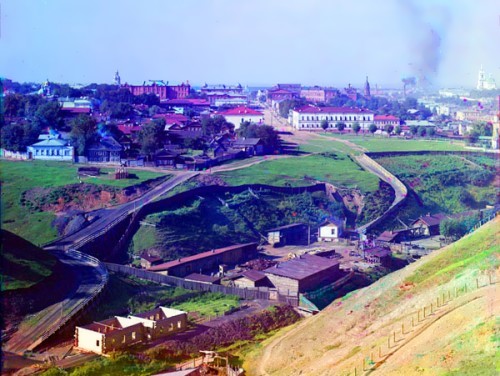 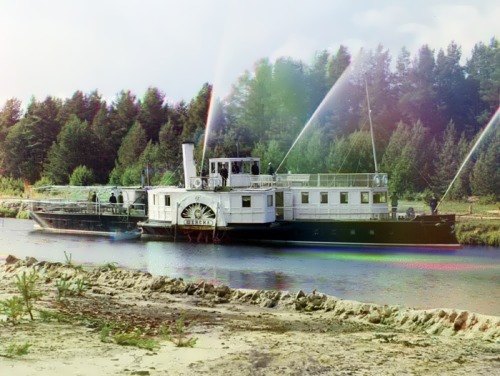 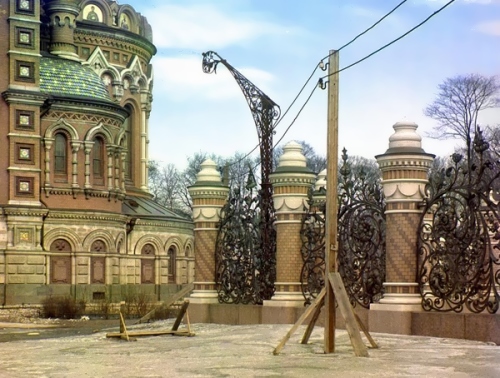 Church of the Savior on Blood – St. Petersburg, Russia 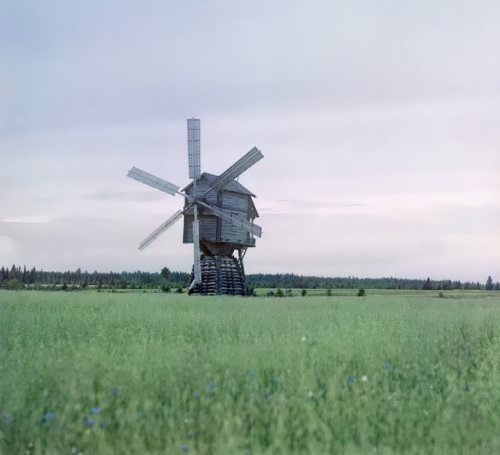 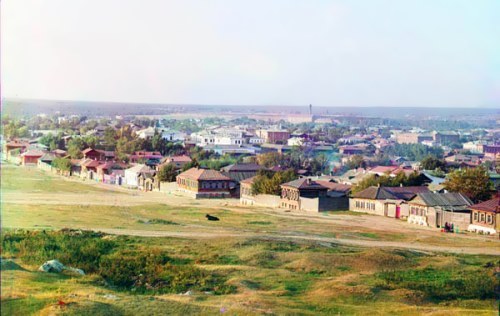 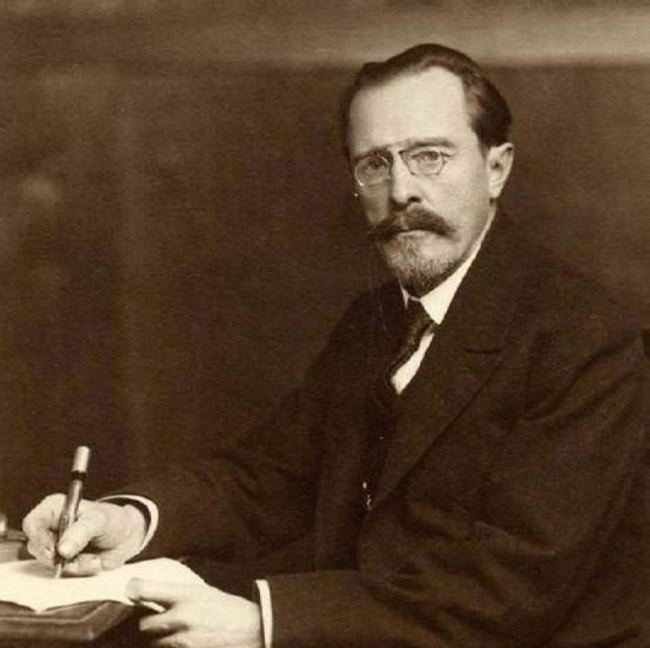 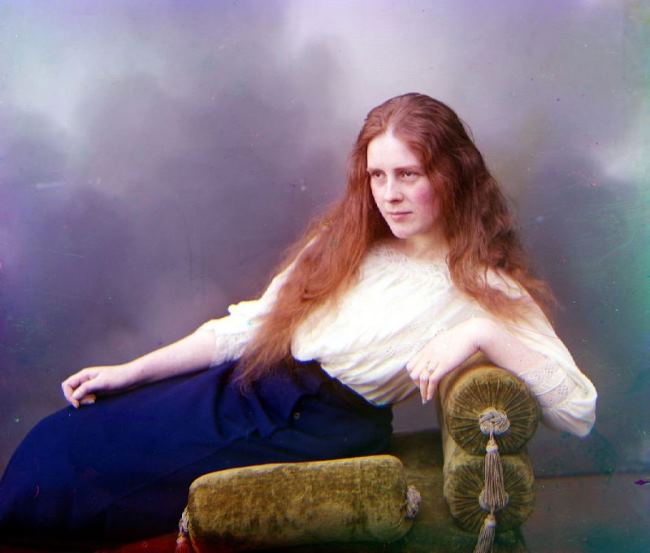 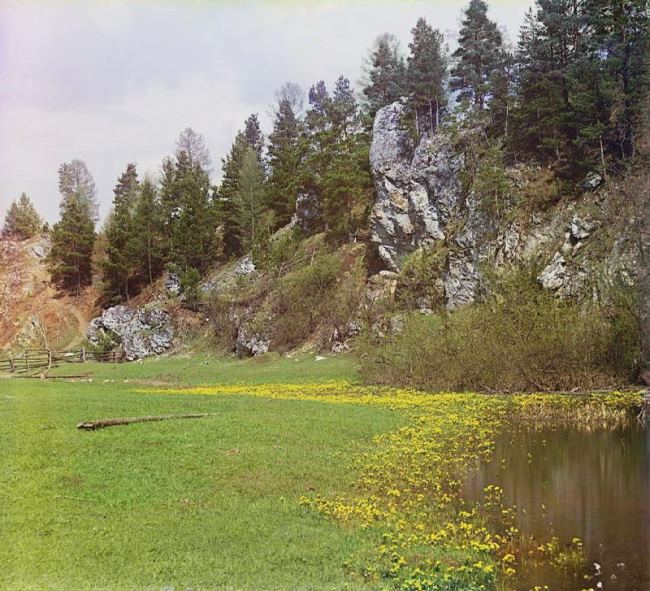 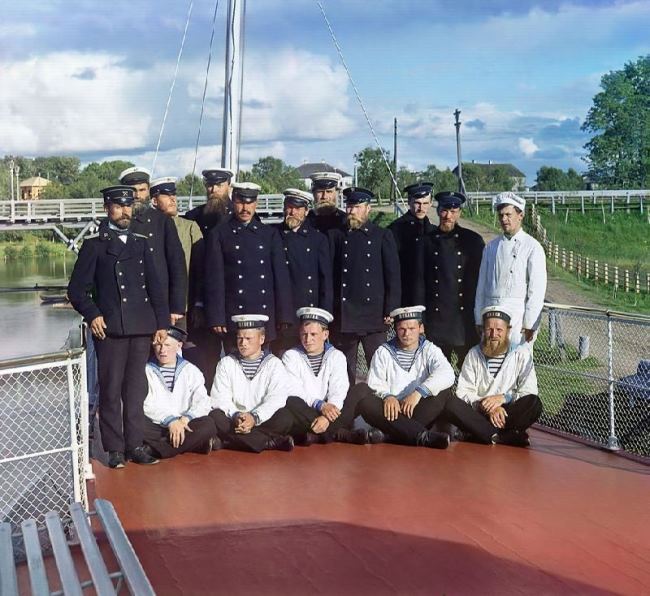 The Crew by Sergey Prokudin-Gorsky