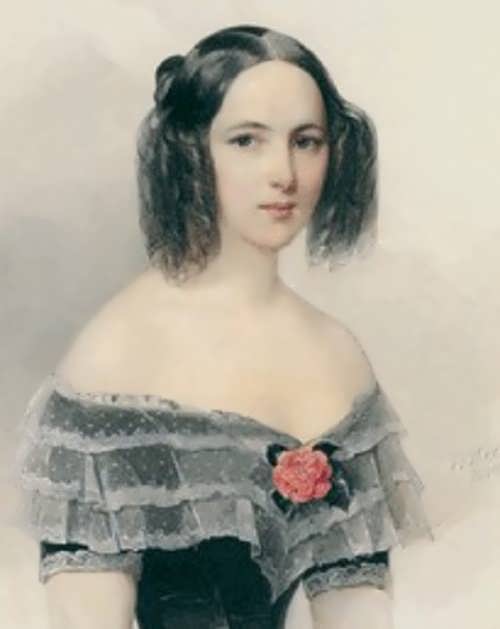 She is well known as a wife of the great Russian poet Alexander Pushkin. Seven years after his death Natalia married General Pyotr Petrovich Lanskoy.
Nataliya Nikolaevna Goncharova (Pushkina, Lanskaya in her second marriage) was born on September 8, 1812 in Tambov Province. Her family lived there during the occupation of Moscow by Napoleon’s forces. The girl was the fifth child of seven children. Her youngest sister Sophia was born and died in 1818. Pretty Natalia got a good education at home. She studied Russian and world history, geography, Russian language and literature, French, German and English.
Pushkin met Natalia Goncharova in Moscow in December 1828 at a ball. The beauty and grace of the girl made an indelible impression on the poet. 16-year-old girl was one of the most talked-about beauties of Moscow. Pushkin was 13 years older than Natalia.

After many hesitations, Natasha eventually accepted Pushkin’s proposal in April 1830. To tell the truth, she was the wife of the Russian poet from 1831 until his death in 1837. On May 19, 1832 Natalia gave birth to her first child – daughter, Mary, and on July 6, 1833 her son Alexander was born. Two years later on May 14, 1835 their second son Grigory was born. The youngest daughter Natalia was born on May 23, 1836.
Seventy-eight letters of Pushkin to his wife are extant, frequently written in a light-hearted tone with touches of ribaldry, yet there are none of what may be called love letters among these. It is believed that the poet dedicated several poems to her, including Madonna (1830).
At one of the social events held in the palace in 1835 Natalia met French military officer Georges d’Anthès. According to contemporaries, before meeting with this handsome officer, there was never any gossip about any connections that discredited Natalya Nikolaevna. Although everyone knew that Nikolay the First was not indifferent to her. Georges did not hide that he was in love with Goncharova, and he told his friends that he hoped to win her heart.
In the autumn of 1836 people in Petersburg talked about Natalia’s love affair with Georges d’Anthès. And on November 4, Pushkin and his friends received an anonymous letter in which the poet was awarded a cuckold diploma. The jealous husband fell into a rage and challenged d’Anthès to a duel.
Learning about Pushkin’s intention to defend his honor, the Frenchman made a marriage proposal to Ekaterina Goncharova, Natalia’s sister. However, after the marriage of d’Anthès and Ekaterina, rumors of his novel with the younger Goncharova did not stop. On January 23 at the ball the Frenchman showed tactlessness in relation to Pushkina.
Nothing could prevent the tragedy, and on 27 January the great poet and his offender met in the deadly duel on the Black River. As a result, Pushkin was wounded and died two days later.
“Go to the village, wear mourning for two years, then marry a good man”, a poet said to his wife before he died.
In 1844 Natalia’s brother Sergey introduced her to his colleague Pyotr Lanskoy.
On July 16, 1844, seven years after the death of Alexander Pushkin, his widow Natalia married General Lanskoy. They were together for 19 years until her death in 1863. Natalia gave birth to three daughters.
Natalia Nikolaevna died on December 8, 1863 in St Petersburg.
Pyotr Lanskoy died 14 years later on May 6, 1877 and was buried in the Alexander Nevsky Monastery, in the same grave as his wife. 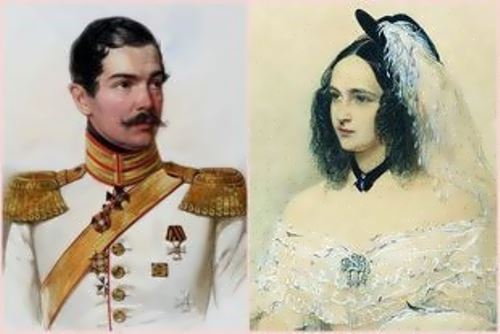 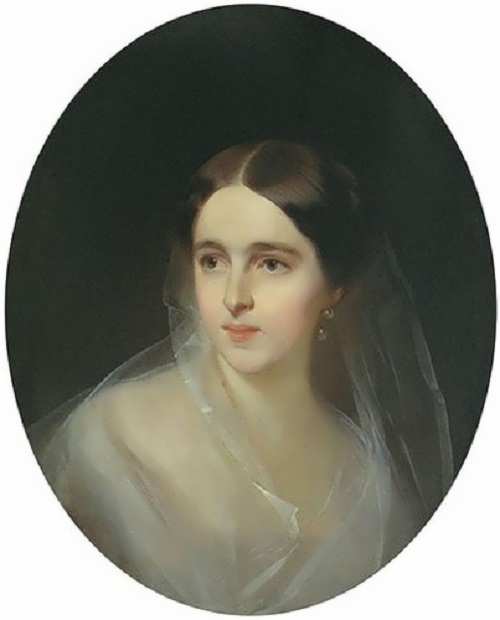 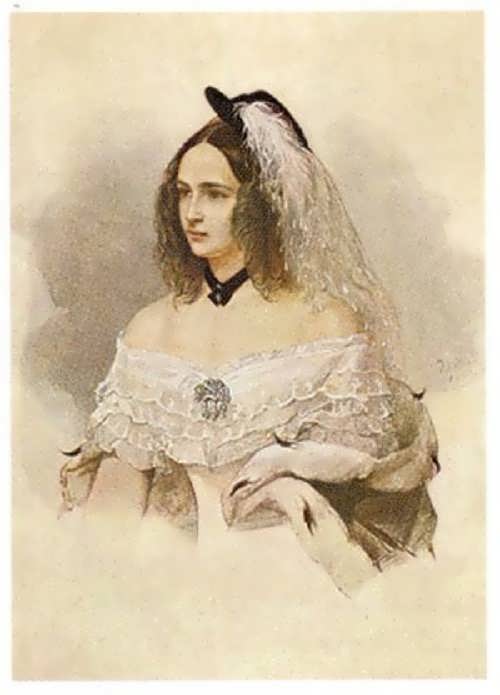 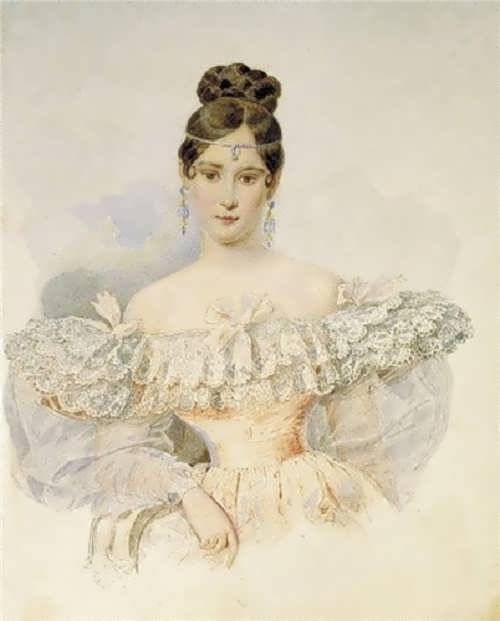 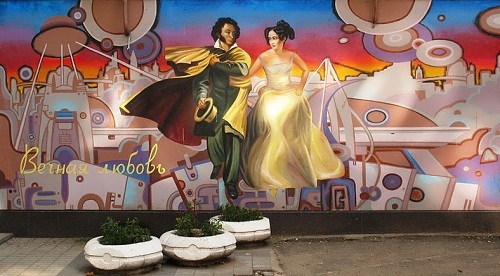 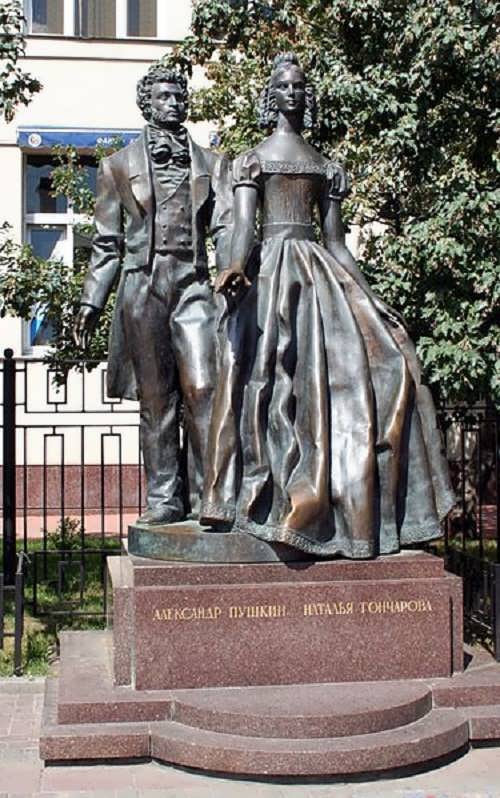 Monument to the Pushkins in Moscow 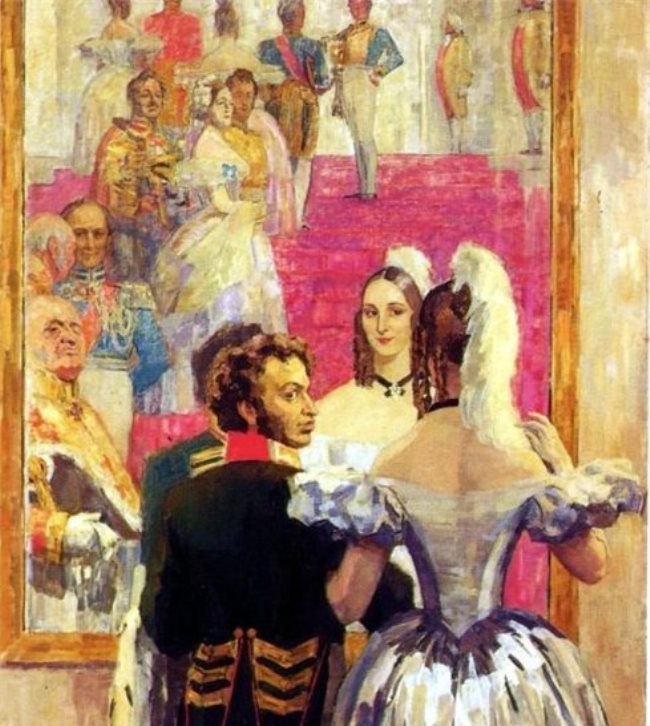 Artist N. Ulyanov. Pushkin and his wife in front of a mirror at a court ball, 1936 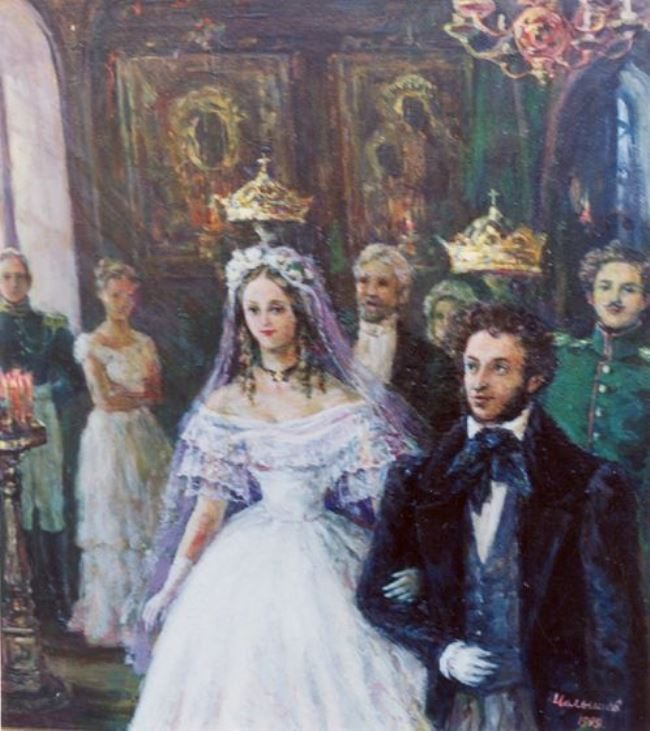 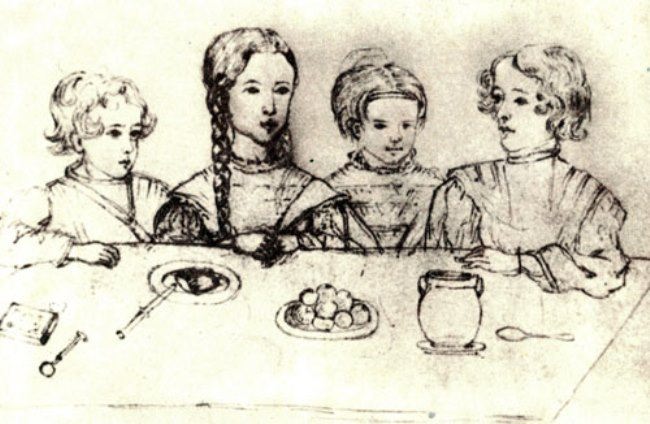 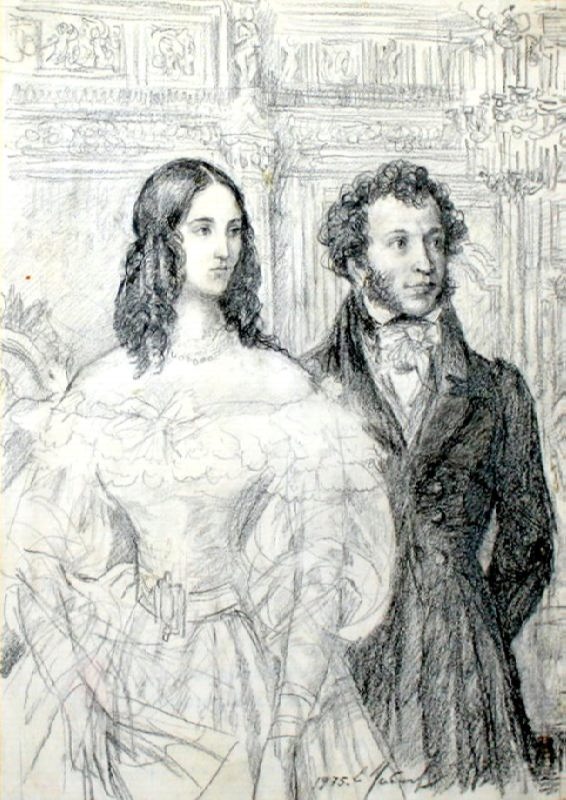 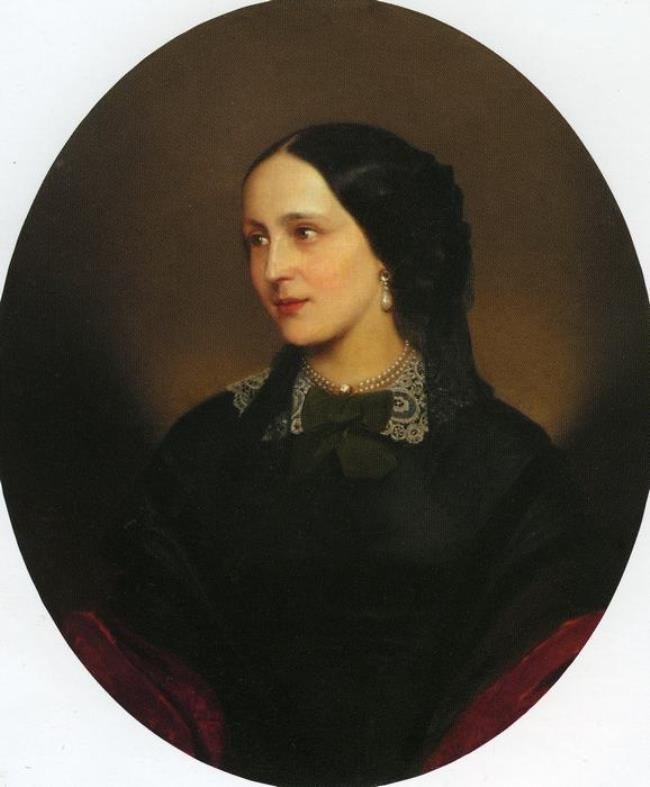 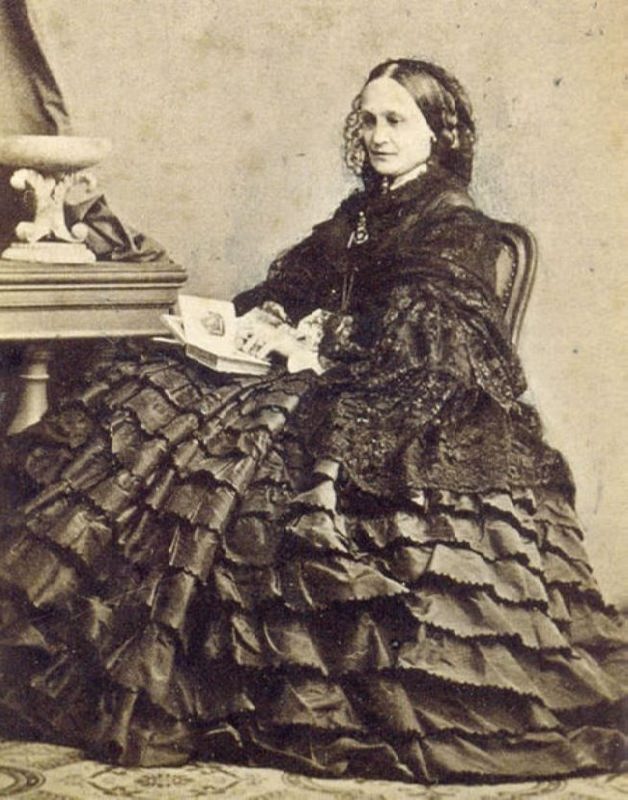 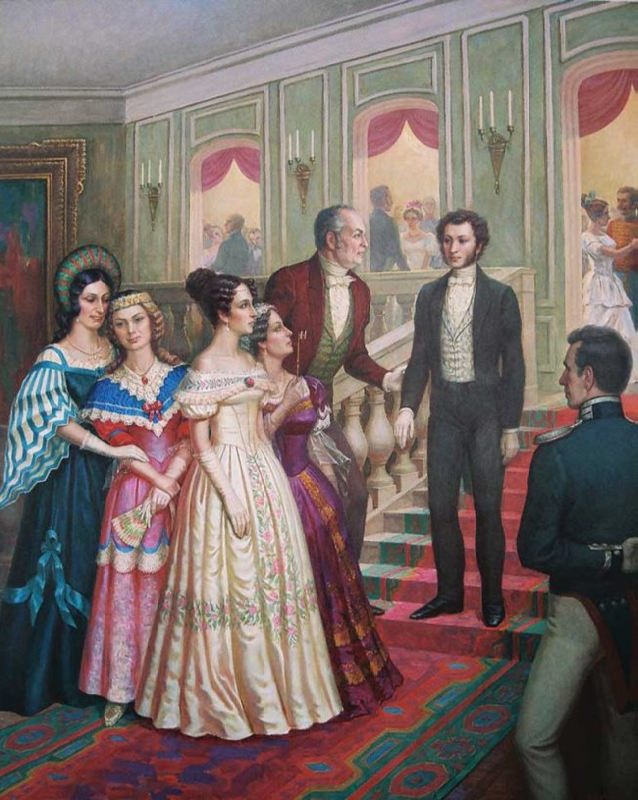 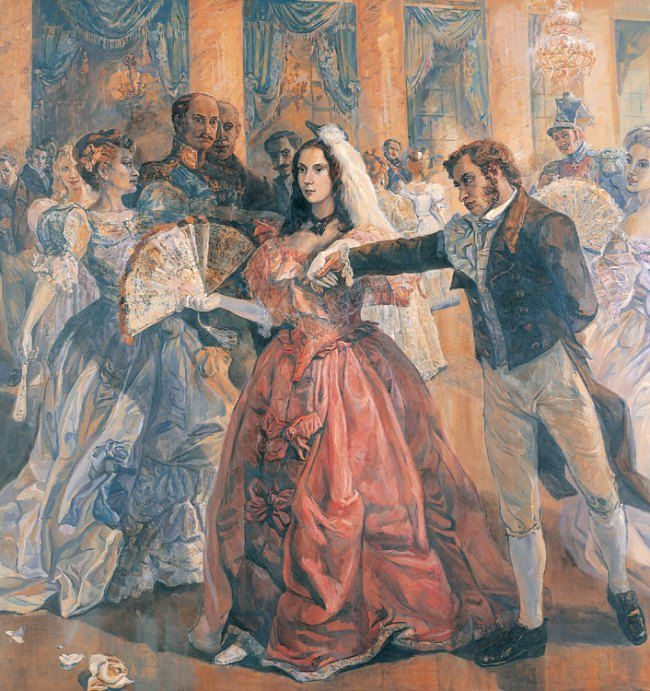 Svyatoslav Gulyaev. Pushkin and Goncharova at a ball 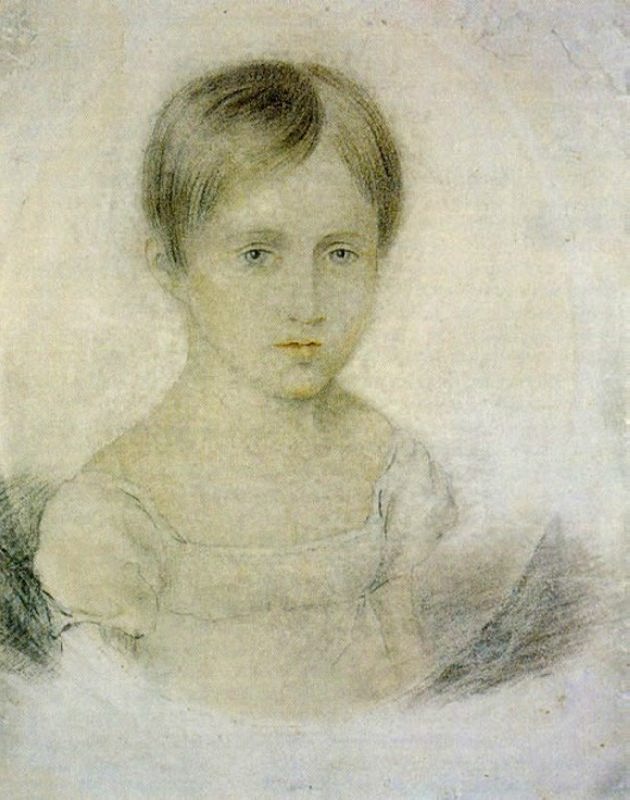 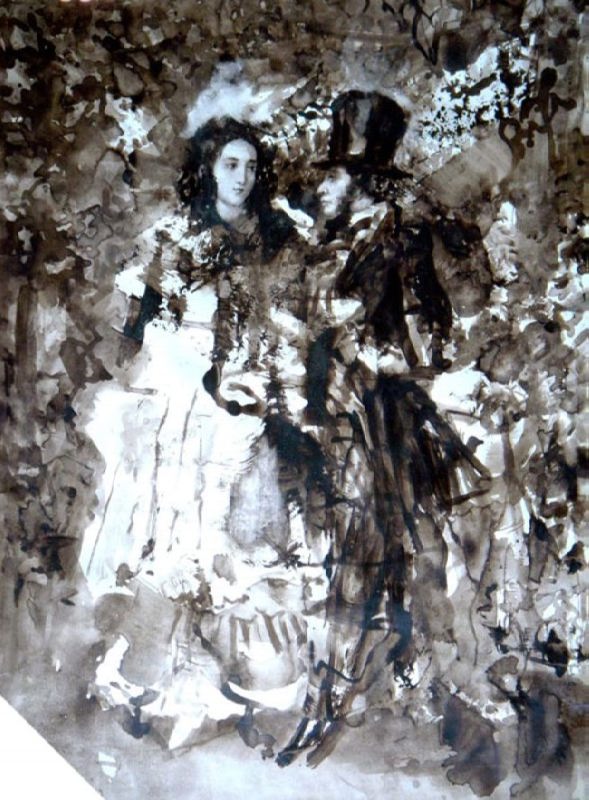 Ustinov. Pushkin and his wife in the garden 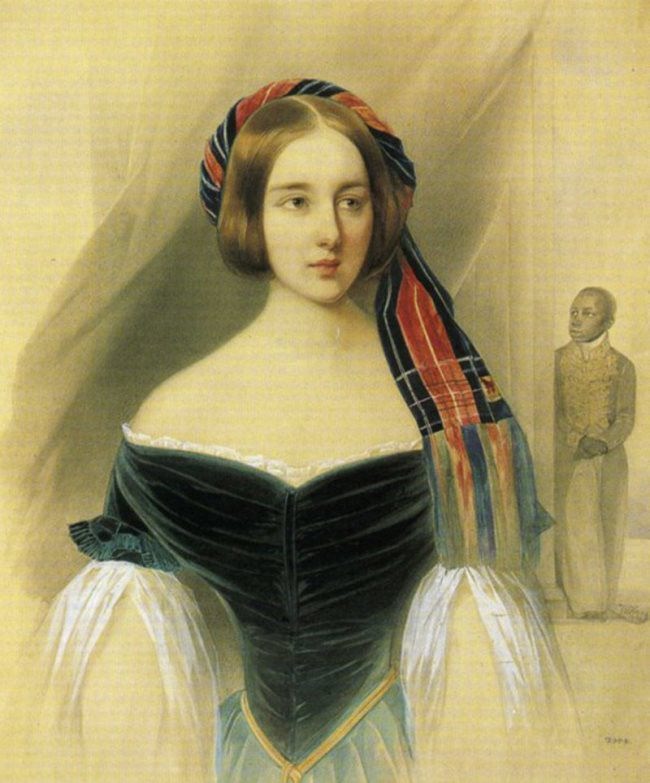 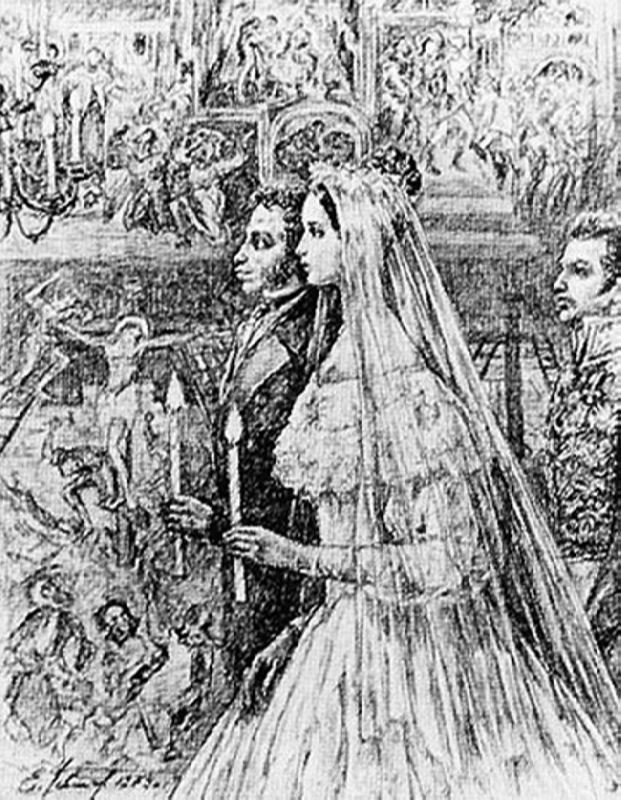 Wedding of Pushkin and Goncharova