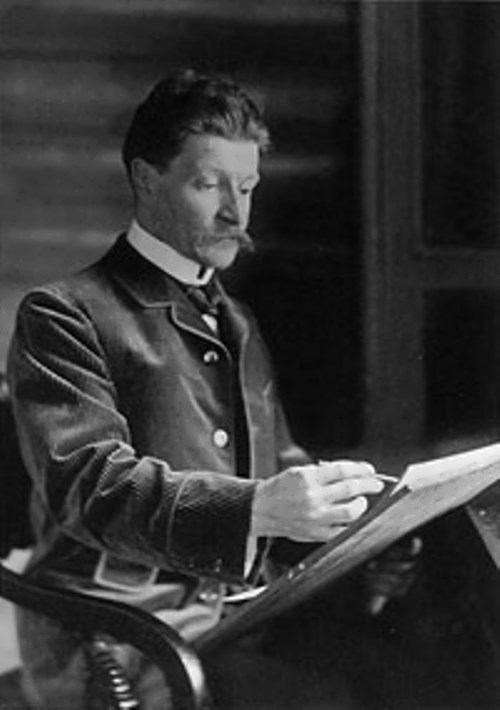 Mikhail Vrubel was a bright representative of the artistic elite of the turn of the XIX-XX centuries. He was convinced that creativity, like a magic crystal directing a person, can lead a traveler astray into labyrinths of art, either to heaven or to hell. The creator was able to penetrate beyond the bounds of earthly existence with all the power of his talent, to sketch pictures inaccessible to the eyes of ordinary inhabitants and present them to the art lovers.
Mikhail Alexandrovich Vrubel was born on March 5, 1856 in Omsk. His father Alexander Mikhailovich was a participant of the Crimean War and military operations in the Caucasus, a military lawyer. The mother Anna Grigorievna, a relative of Decembrist Basargin, gave birth to 4 children and died when Mikhail was three years old. Two years later, his father married pianist Elizaveta Khristianovna Vessel.
In 1865 the family moved to the Volga region, where Lieutenant-Colonel Vrubel took command of the provincial garrison. In Saratov Mikhail saw a copy of the fresco The Last Judgment by the Italian sculptor and painter Michelangelo. The boy was able to reproduce it with all the characteristic details.
Mikhail’s professional activity had been predetermined since his birth. The gifted boy was not enthusiastic about the prospect of becoming a lawyer, but he did not dare go against his father’s will.

In 1874, Vrubel entered the St. Petersburg University, Faculty of Law. In his student years, Mikhail met with composer Modest Petrovich Mussorgsky. This outstanding figure of art filled the unformed spiritual world of Mikhail with his thoughts, convictions and compositions.
In the same period, the boy secretly from relatives began to attend lectures by Pavel Petrovich Chistyakov. In January 1880, Mikhail graduated from the university, and in the autumn he was officially enrolled in the Academy of Arts.
The decision of his son, who disregarded the family tradition and chose his own way of life, shocked Alexander Mikhailovich.
For his drawing Mary’s Betrothal to Joseph the hard-working student received a small silver medal. 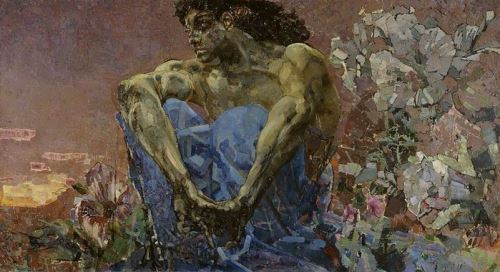 In the autumn of 1883, Professor Prakhov, on the recommendation of Chistyakov, invited Vrubel to Kiev to work on the restoration of the Church of St. Cyril of the 12th century. In the city, crowned with the domes of ancient temples, the independent artistic life of Mikhail began. In November 1884 the artist went to Venice. The beauty of the most romantic city of Italy did not impress Mikhail. Vrubel spent a lot of time in cathedrals and museums, absorbing the experience of the great masters of the Renaissance.
After spending six months in Venice, in April 1885 Vrubel returned to Kiev and created four icons: St. Cyril, Our Lady with the Child, St. Athanasius and Christ the Savior. Among the variety of restoration works, apart from the Descent of the Holy Spirit upon the Apostles, there were frescoes Entry of the Lord into Jerusalem and Lamentation.
In 1886, the artist painted The Girl Against the Background of the Persian Carpet and The Oriental Tale.
Vrubel’s participation in the exhibitions of the World of Art and a number of international exhibitions brought the artist European fame. The painting The Swan Princess depicting Pushkin‘s heroine, as well as Lilacs, Pearl, Demon, Six-winged Seraph, Pan and Fortuneteller were especially prominent among his later masterpieces. The last work of the master was a portrait of the symbolist poet Valery Bryusov, which was never finished. 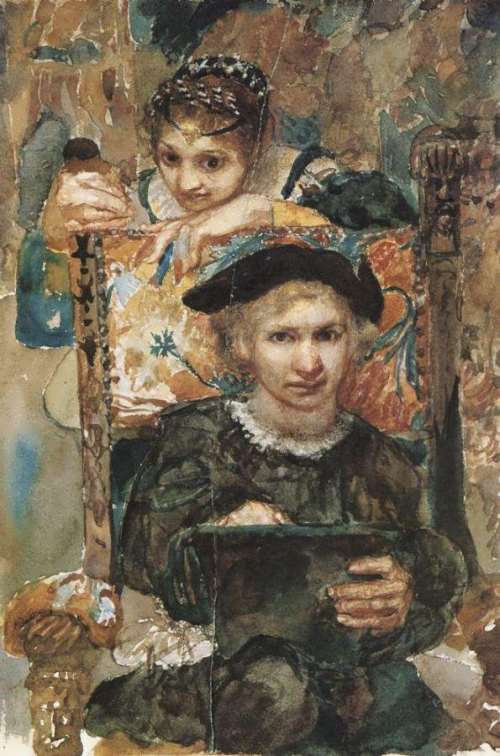 Hamlet and Ophelia by Mikhail Vrubel

Personal life
According to biographers, Vrubel depicted the face of Prahov’s wife Emilia Lvovna on the icon The Virgin with the Child.
Nadezhda Ivanovna Zabela became the first and only wife of the artist. She was the prima donna of the Private Russian Opera. The singer inspired Vrubel to paint the picture Hansel and Gretel. In September 1901, their son Savva was born. Unfortunately, the boy was born with a cleft lip. Vrubel saw in this “spoiled blood” and “fatal heredity” and since then he became thoughtful.
This state of mind turned him away from all creative intentions and returned to the image of the demon. Two months after the birth of his son, he began working on Demon Defeated. He painted the picture as obsessed, sometimes for 20 hours a day. He considered himself a criminal, worthy of punishment for having allowed himself to paint both Christ and the demon.

In April 1902, Vrubel was diagnosed with incurable mental illness. In May 1903 his son died. The incurable disease caused vision loss in 1906. The last four years, Mikhail Alexandrovich spent in darkness at a St. Petersburg hospital for the mentally ill.
The great artist died of pneumonia on April 1, 1910. Alexander Blok called him “a messenger of other worlds”. 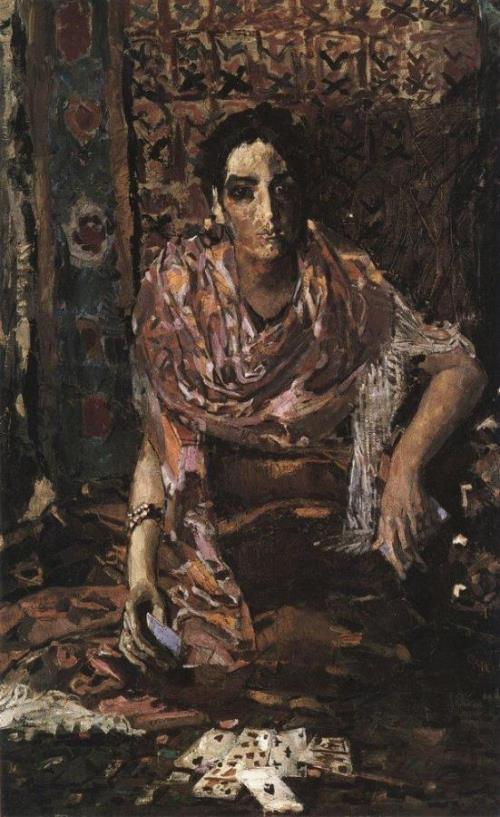 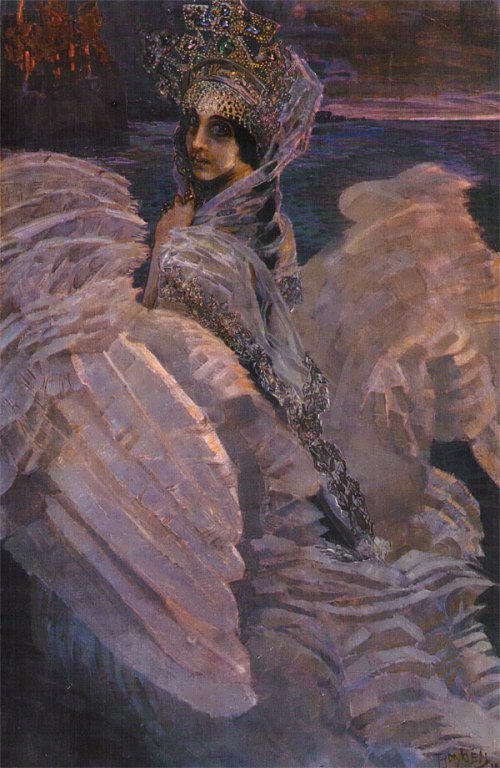 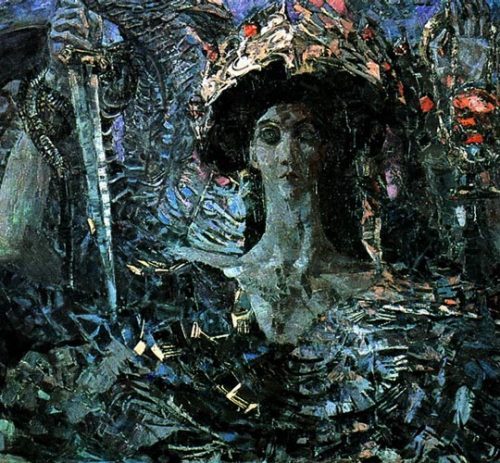 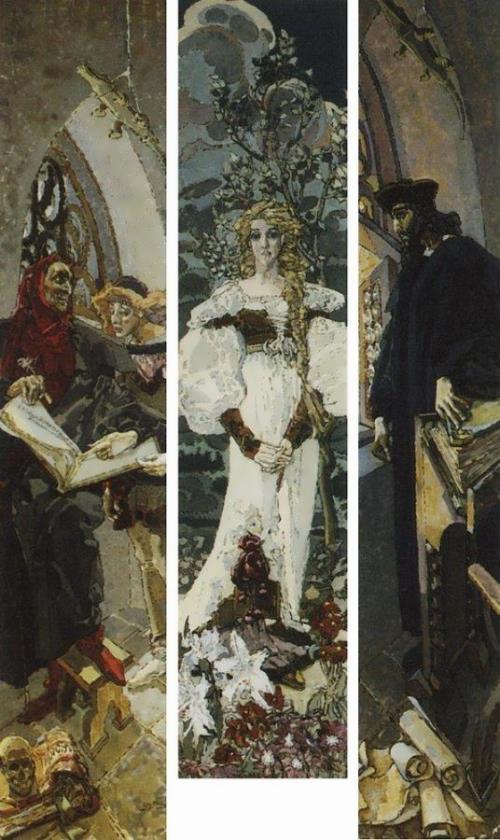 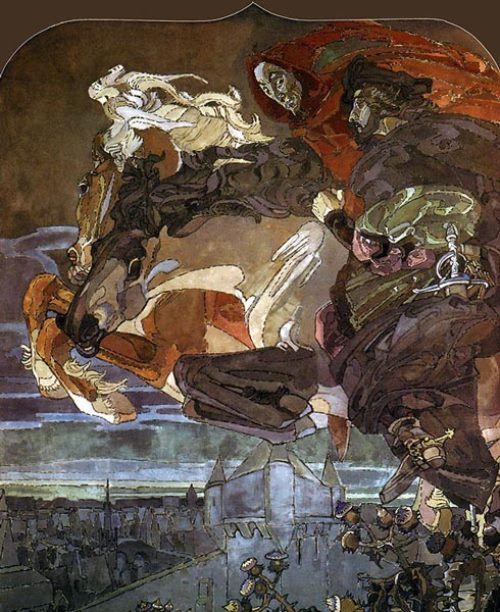 Flight of Faust and Mephistopheles 1902 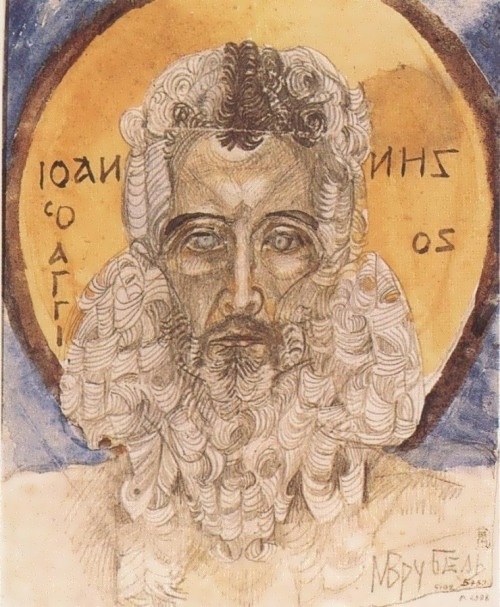 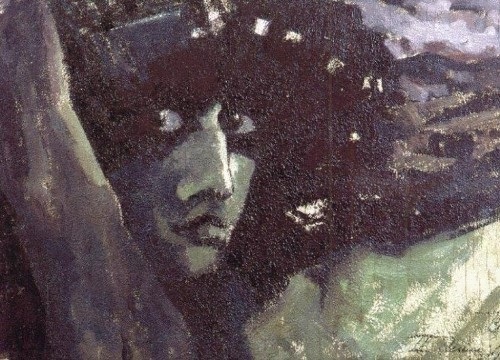 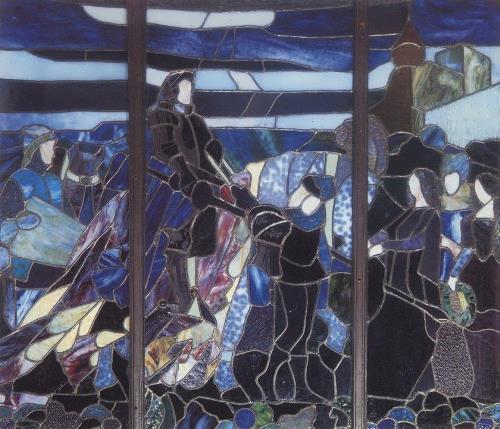 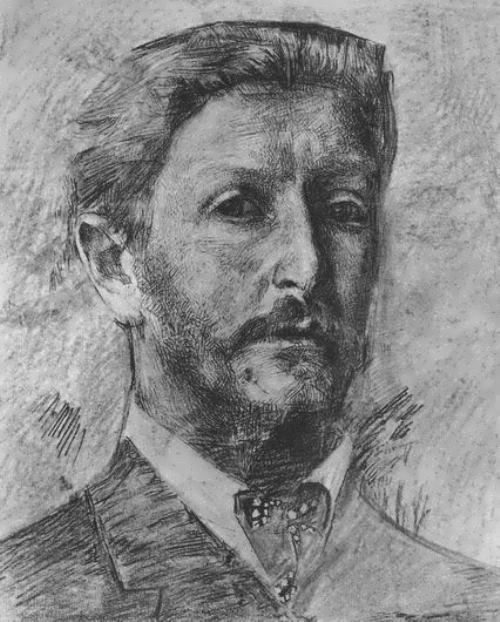 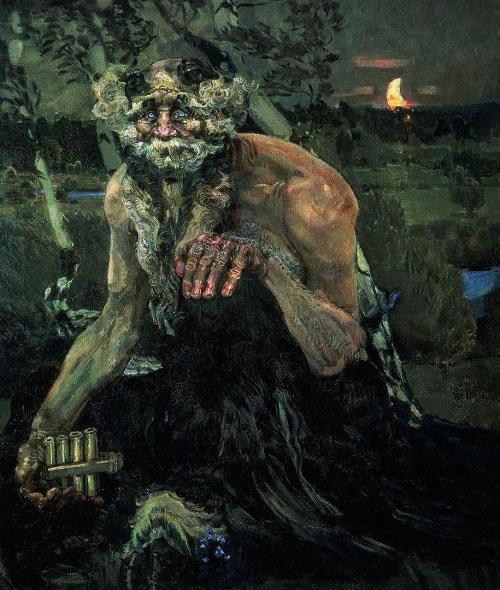 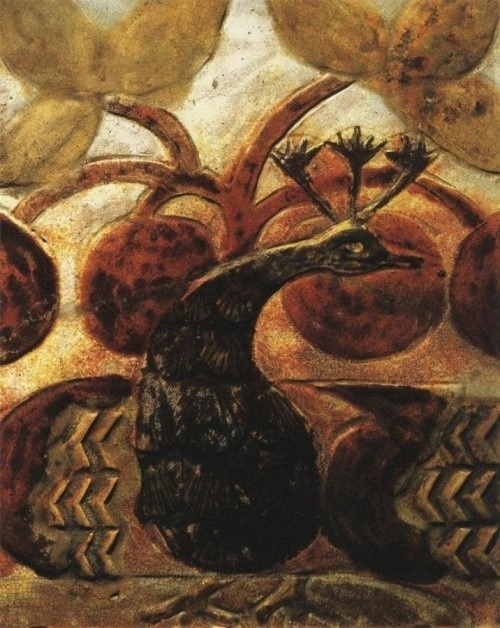 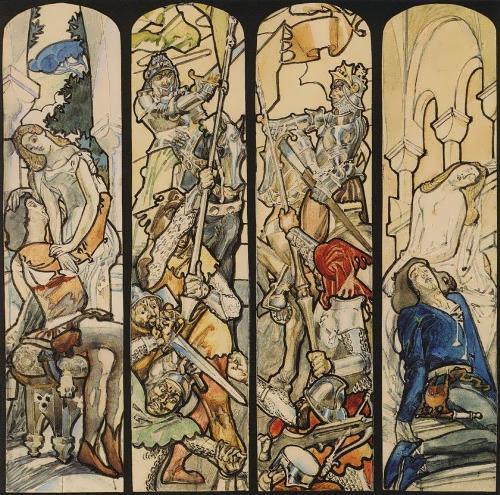 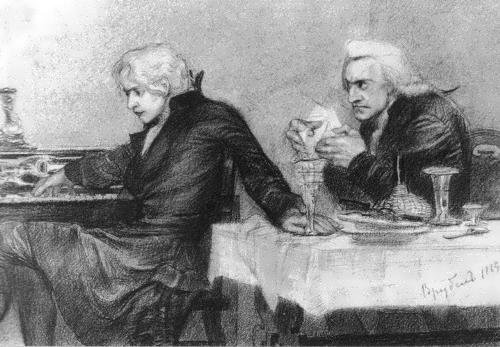 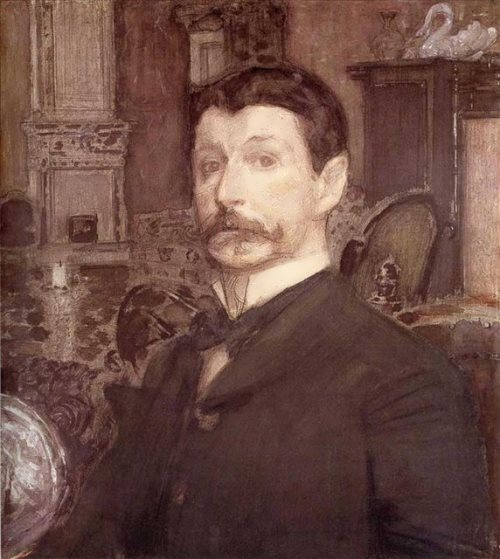 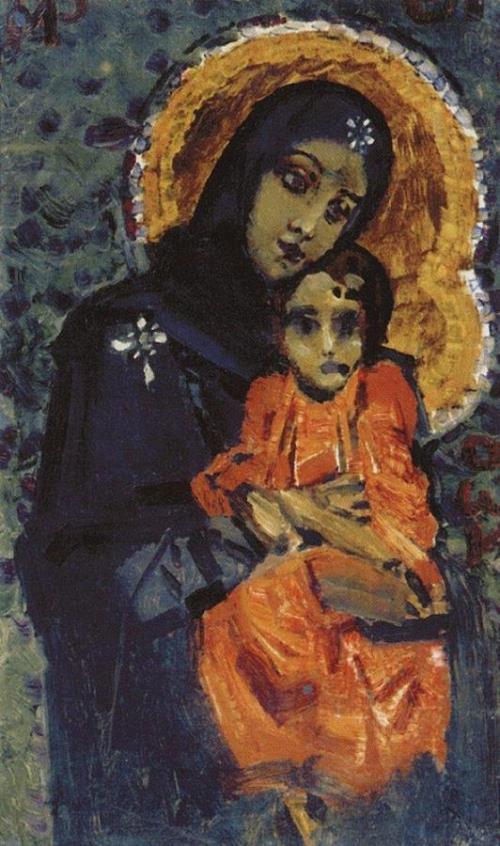 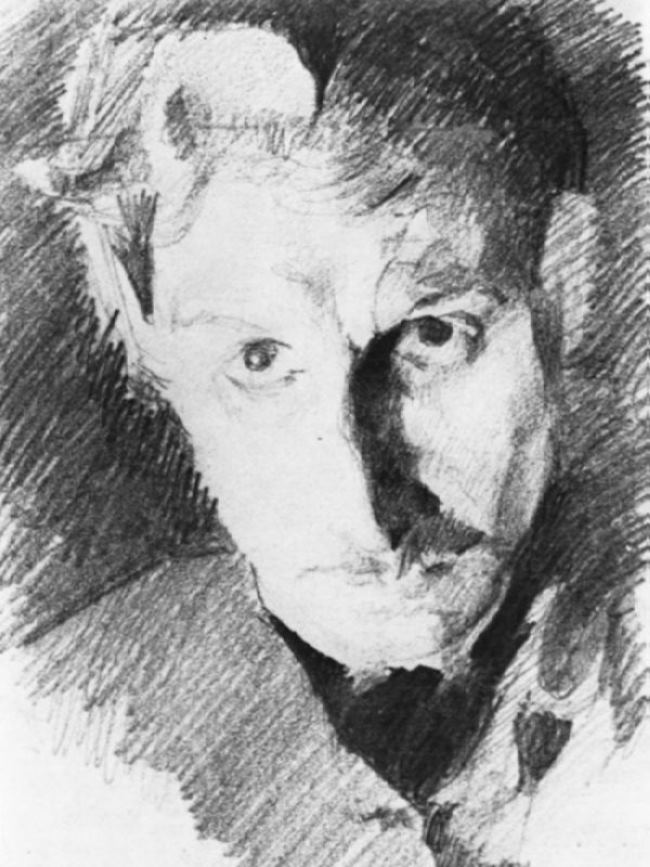 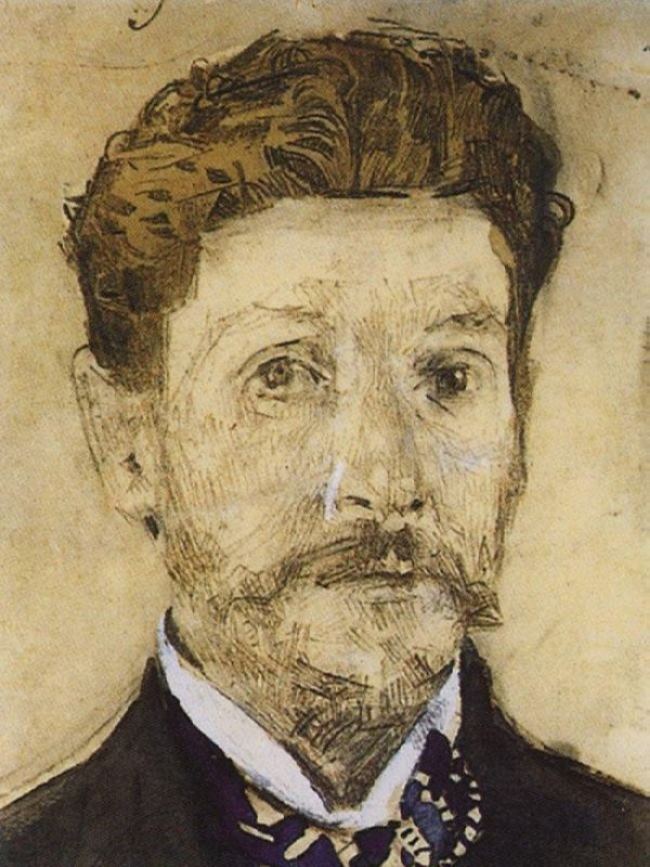 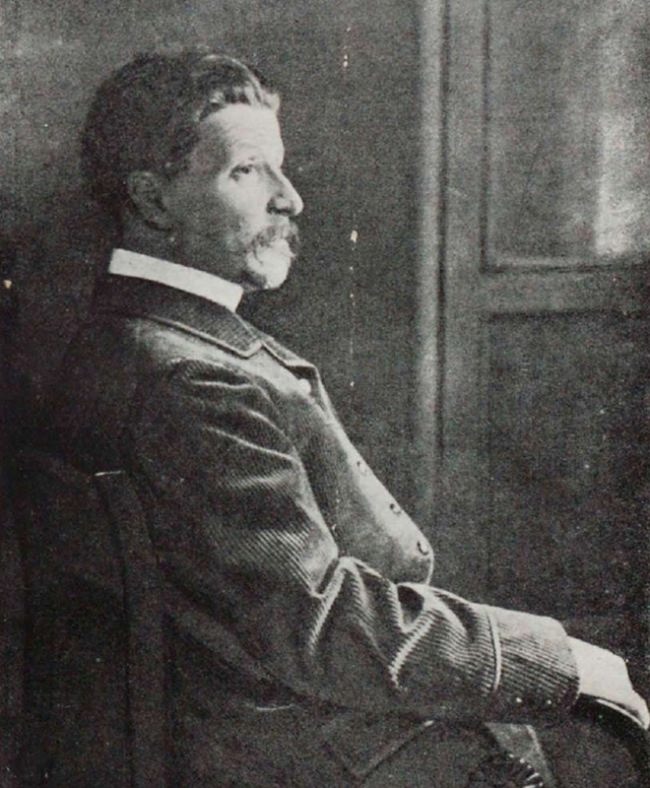 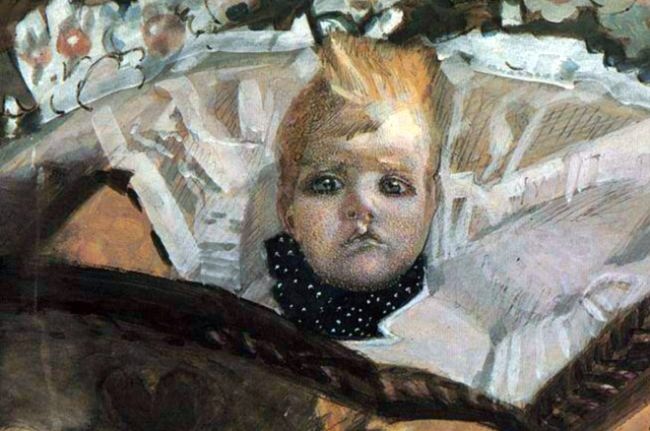 Portrait of a son 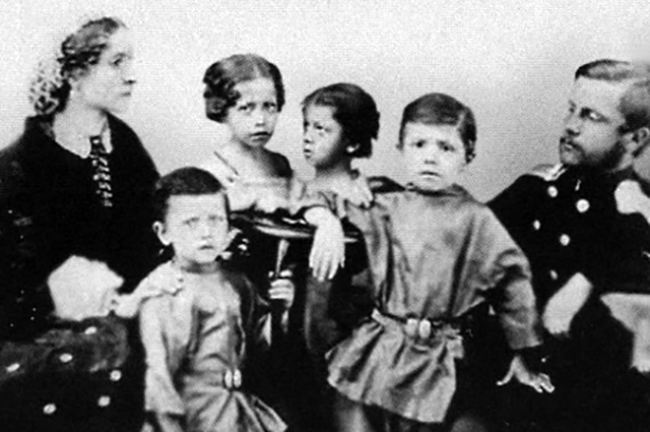 The family of Mikhail Vrubel 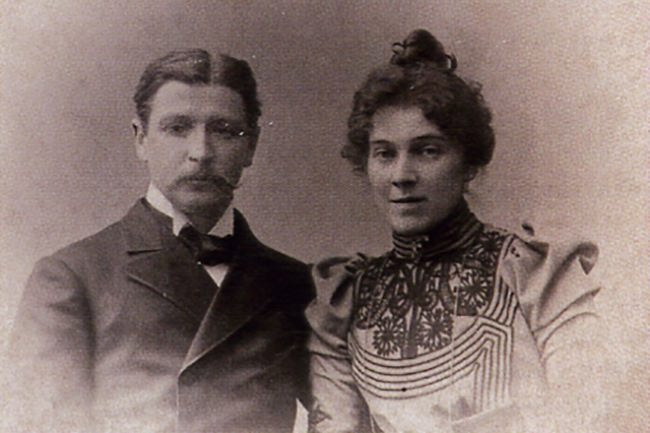 Vrubel with his wife 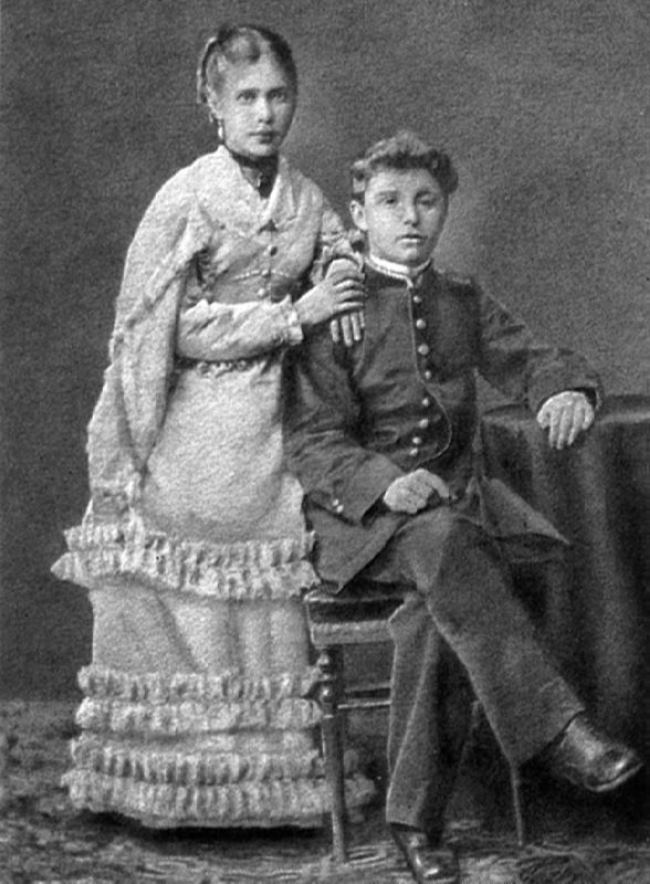 Young Vrubel with his sister