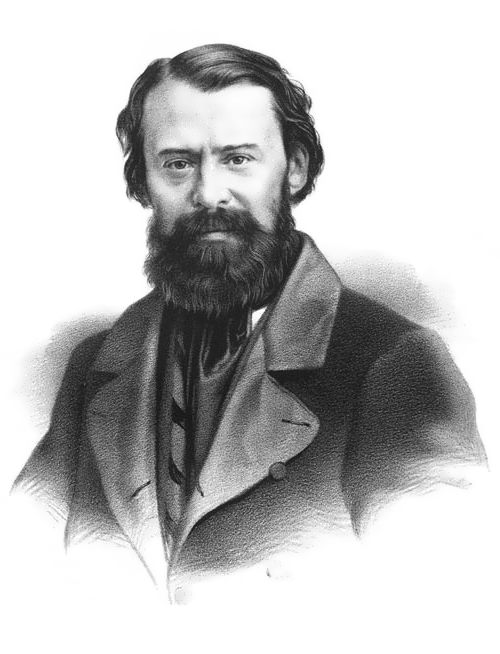 Lev Mei was a Russian poet, prose writer and playwright, translator.
He was born on February 25, 1822 in Moscow into a family of a German officer and a Russian woman. His father was wounded in the Battle of Borodino and died young. The boy spent his childhood with his grandmother A.S. Shlykova.
In 1831, Lev entered the Moscow Institute for the Nobility. For his excellent academic results Mei was awarded a state scholarship. So he could study at the Imperial Lyceum in Tsarskoye Selo near Saint Petersburg (Alexander Pushkin’s alma mater). There Lev began writing poetry.
In 1841, Mei returned to Moscow, where he worked in the office of the Governor for 10 years. In his spare time, he studied theology, classical Greek and Roman authors, and the old Russian chronicles.
In the second half of the 1840s Mei visited Mikhail Pogodin’s literary salon. There he became acquainted with the leading Slavophiles. Also he began publishing verses in their periodical Moskvitianin. In Saint Petersburg Lev wrote Reading Library, Domestic Notes, Son of the Fatherland, Russian Word, Russian Peace, and Svetoch.

By the way, Mei wrote two historical dramas The Tsar’s Bride (1849) and The Maid of Pskov (1859). Russian composer Nikolai Rimsky-Korsakov wrote operas based on the dramas.
In 1850, Mei married S. G. Polyanskaya.
Some of his works were translations from different languages: English, French, German, Italian, Polish, Czech, Ukrainian, Belorussian, Ancient Greek, and Hebrew! But most of all he was interested in Russian folklore.
His remarkably good translation of Mignon and the Harpist’s poignant song from Goethe’s Wilhelm Meister novel inspired Tchaikovsky to write one of most famous romances None But the Lonely Heart. In total, Tchaikovsky wrote 11 songs based on Mei’s poems.
Lev Aleksandrovich died on May 28, 1862 in St. Petersburg.
Source: vm.ru