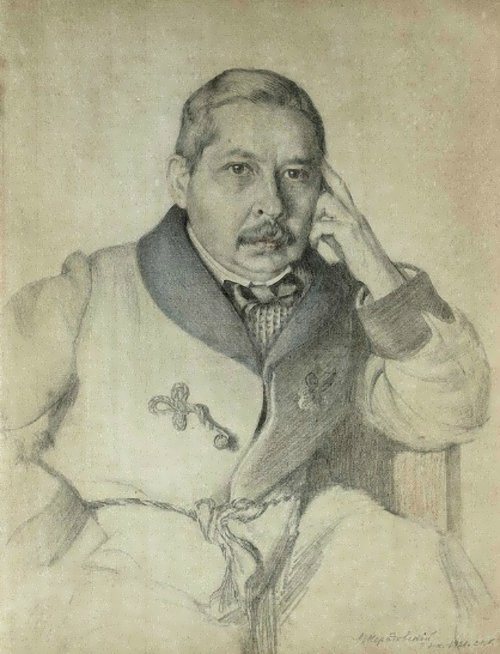 Konstantin Somov was a Russian painter and graphic, master of portrait and landscape, illustrator, one of the founders of the World of Art and eponymous magazine.
Konstantin was born on November 30, 1869 in St. Petersburg into a family of editor of The Fine Arts Herald and a connoisseur of painting, curator of the Hermitage, Andrei Ivanovich Somov. His mother, Nadezhda (nee Lobanova) was a good musician, a highly educated woman.
Since childhood Konstantin dreamed of becoming a painter.
From September 1888 to March 1897 Konstantin studied at the St. Petersburg Academy of Arts. In 1897-1898 he studied at the Academie Colarossi in Paris. And in 1899 he moved to St. Petersburg.
The artist took the most active part in the design of the World of Art magazine, as well as the periodical Art Treasures of Russia (1901-1907), published under the editorship of A. Benois.
Also Somov is known as a master of book graphics, who created illustrations for the Count Nulin by A. Pushkin (1899), novels by N. Gogol The Nose and Nevsky Prospekt (1901). Actually, he made the covers for K. Balmont’s poems Firebird, V. Ivanov’s Cor Ardens, title page of A. Blok’s book Theater, etc.

Along with landscape and portrait painting and graphics he created porcelain compositions Count Nulin (1899), Lovers (1905), and others.
His first solo exhibition of paintings, sketches and drawings (162 works) was held in St. Petersburg in 1903. In the same year, 95 works were exhibited in Hamburg and Berlin. Two years later he began to work in the magazine Golden Fleece.
In January 1914 he became a full member of the Academy of Arts. Moreover, in 1918, he became a professor at the Petrograd State Free Art Schools.
Later, in 1919, he had a solo exhibition in the Tretyakov Gallery.
In 1923 Somov went to America. A year later, in January 1924, exhibition of his paintings was held in New York.
The artist didn’t return to Russia. Since 1925 he lived in France. Like other Russian artists who found themselves in emigration, Somov was trying to find a livelihood and was engaged in book graphics again. The last book work of Somov was four portraits of the heroine of the novel Dangerous Liaisons by the Choderlos de Laclos. His constant model A. Levchenko was a prototype of young beauty Cecile de Volange. 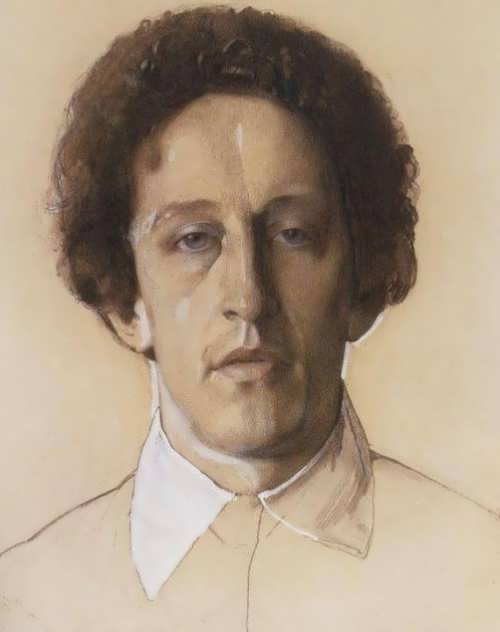 For Somov the most important and precious thing in painting was the cult of beauty, which was associated with a contemplative attitude to the world, and especially to the world of things.
The artist created his own world. His small canvases show ladies in rosy and silvery silks and crinolines, tired and lost in dreams. Lovers talk in whispers, pass secret notes and steal kisses. Somov’s art reflected the complexity and sharp contrasts of the age.
Konstantin Somov died on May 6, 1939 in Paris and was buried at the Sainte-Genevieve-des-Bois cemetery. 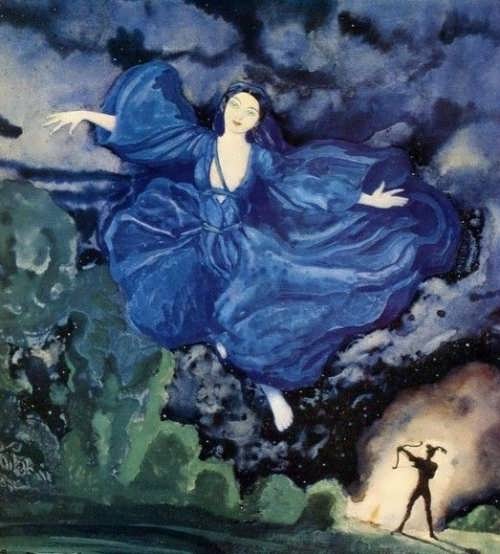 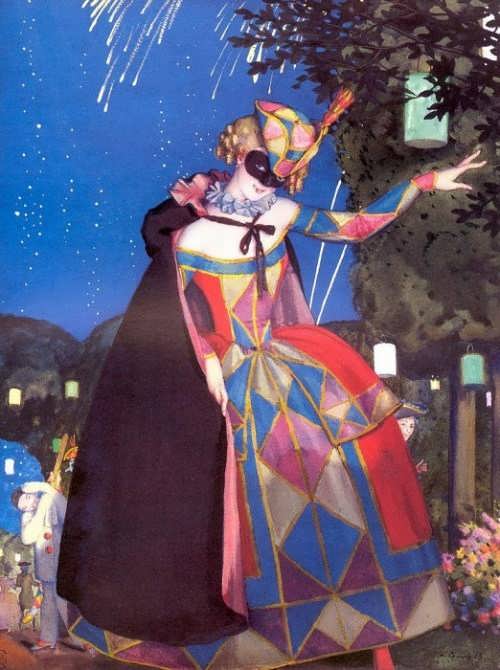 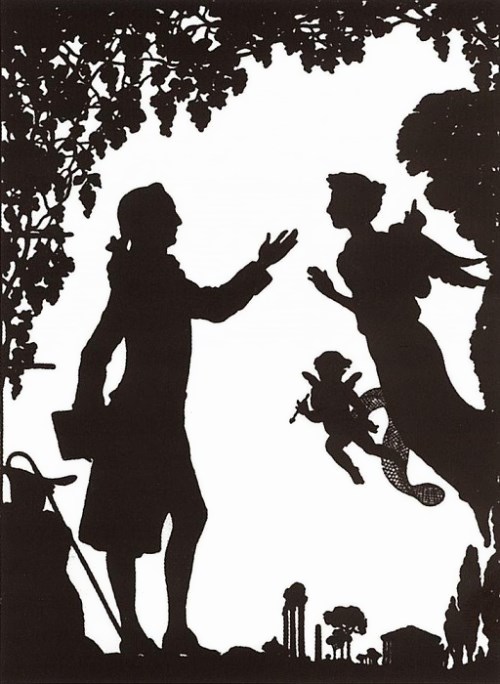 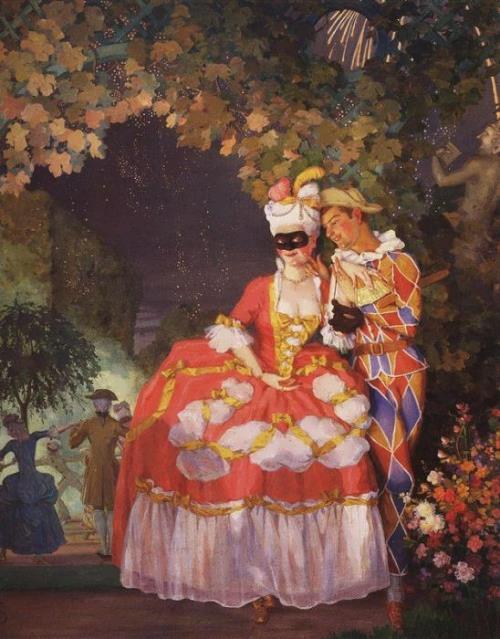 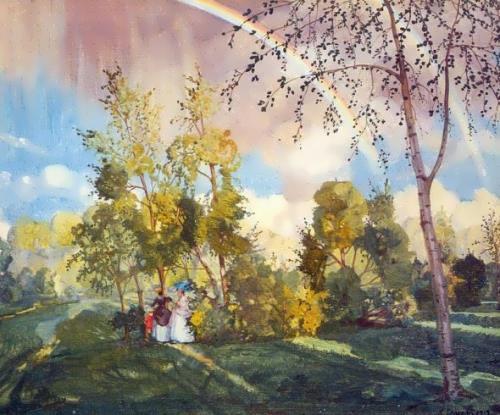 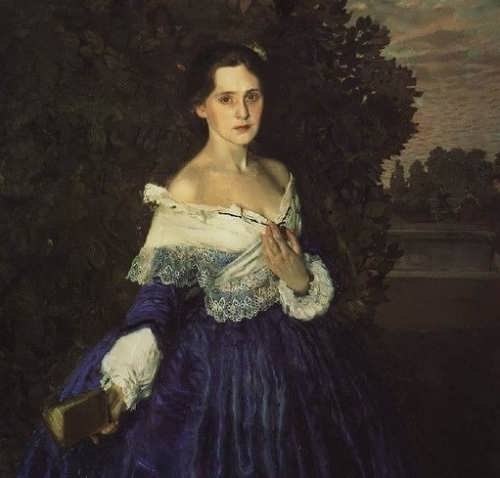 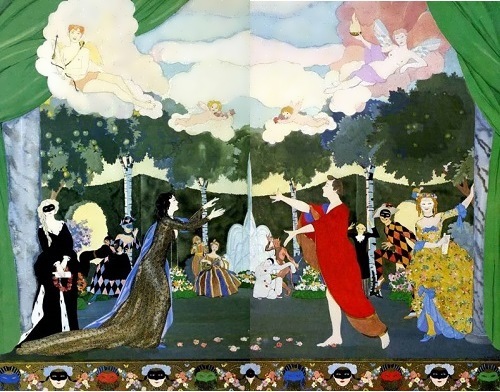 Sketches for the Moscow Free Theatre, 1913 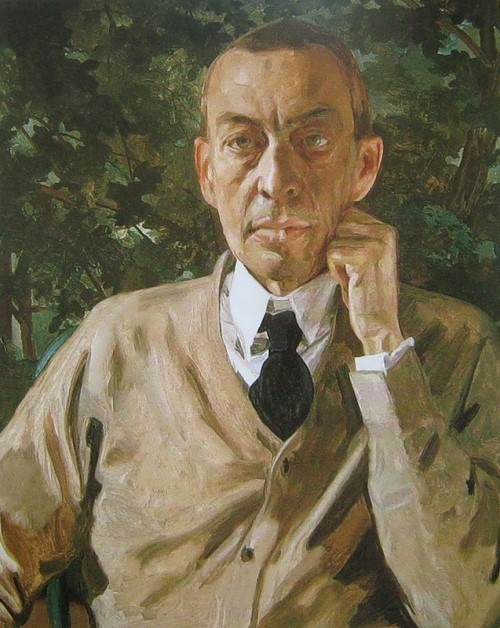 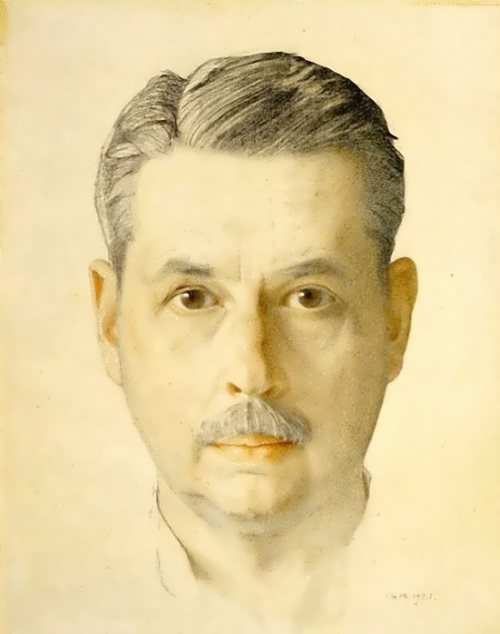 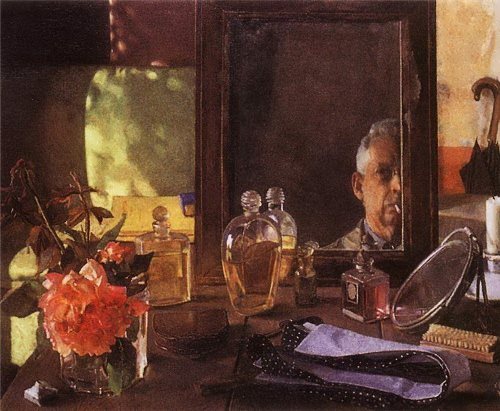 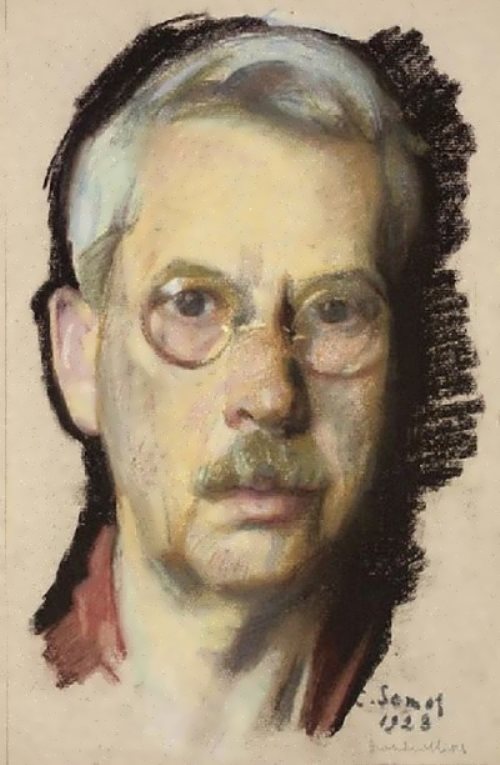 Interesting Self-portrait in the pince-nez, 1928 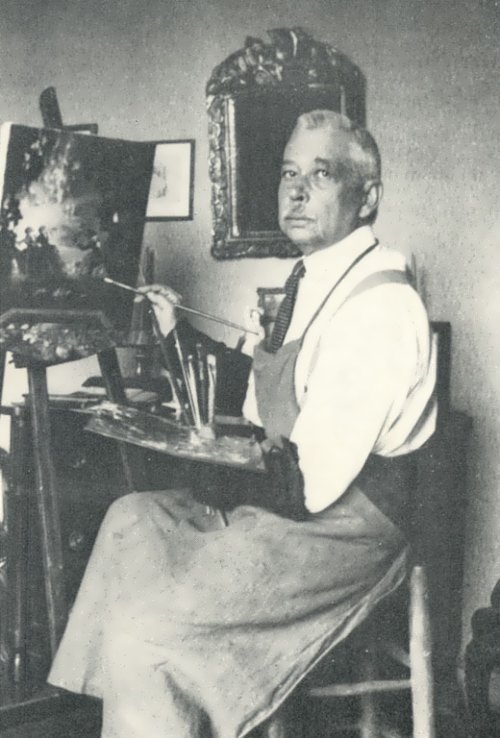 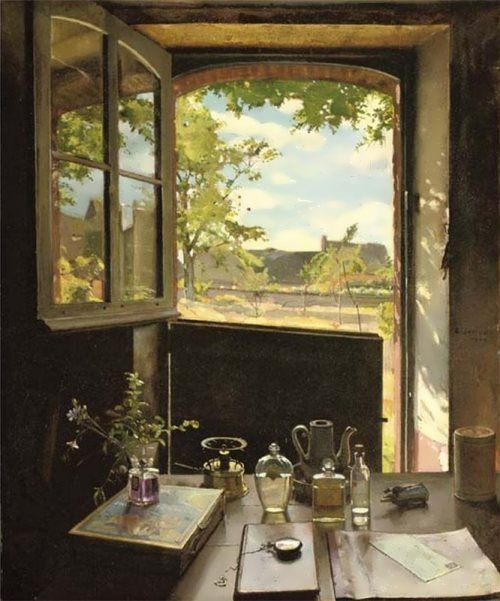 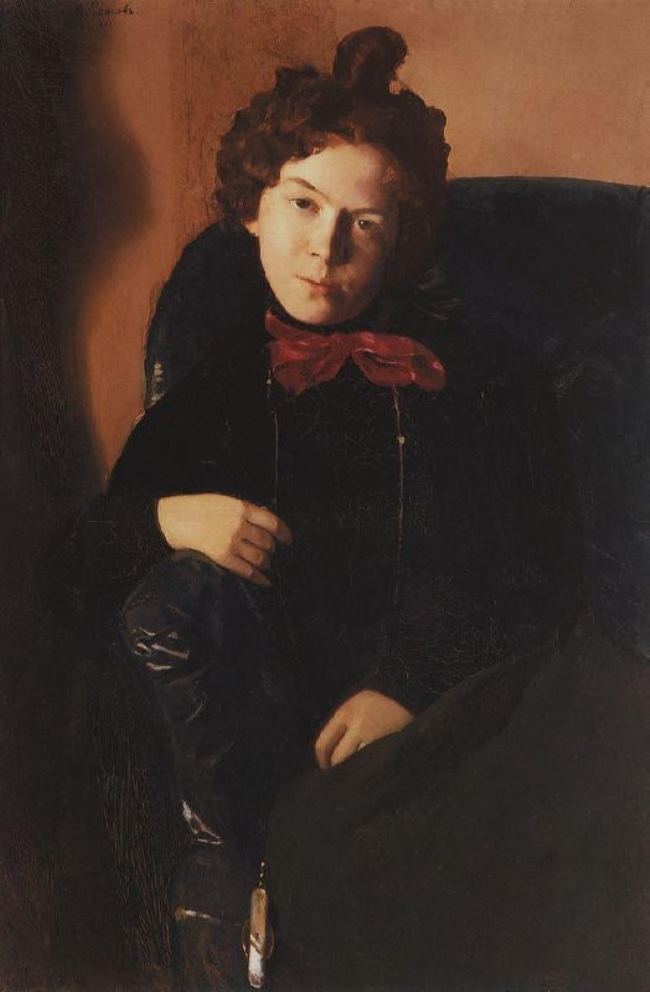 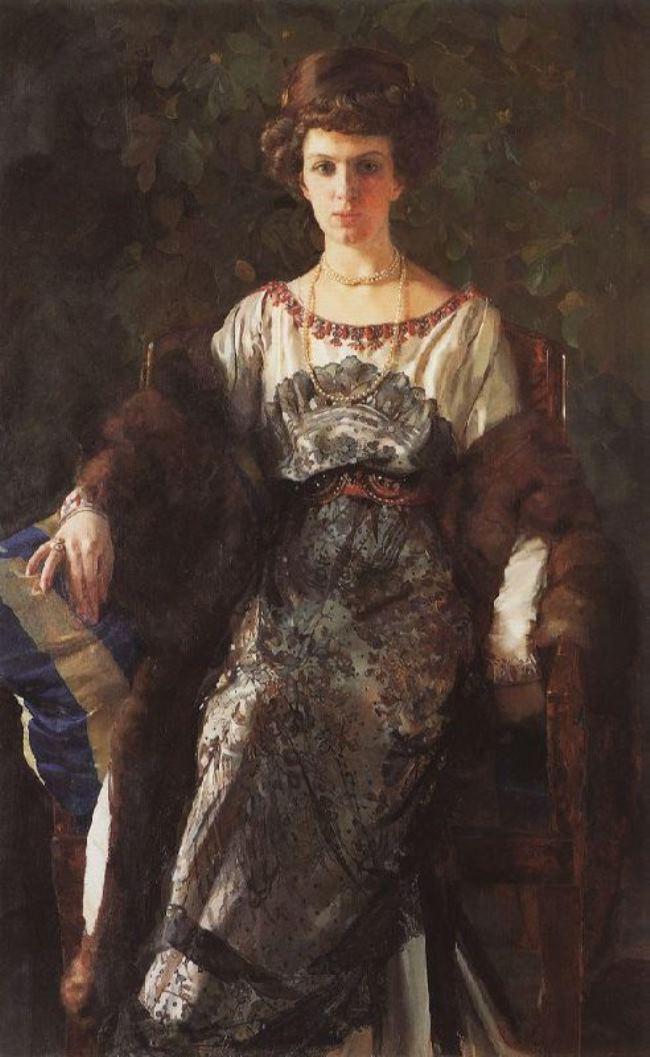 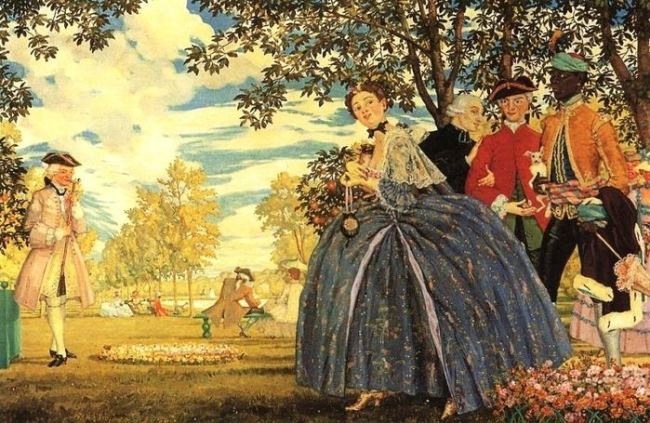 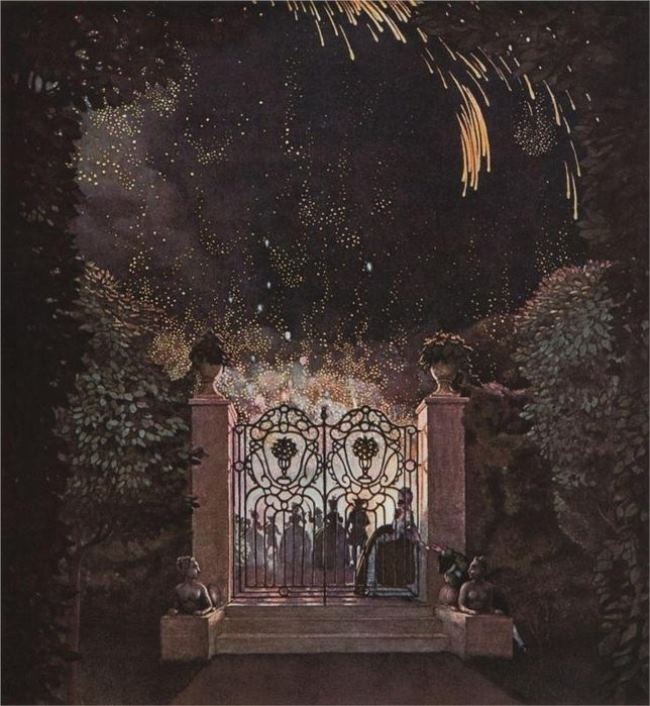 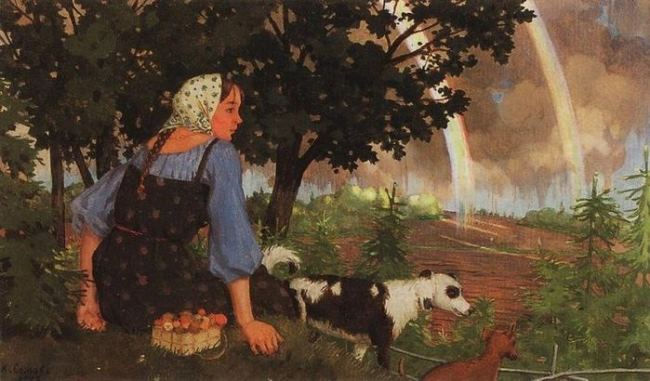 Girl with mushrooms under the rainbow, 1922 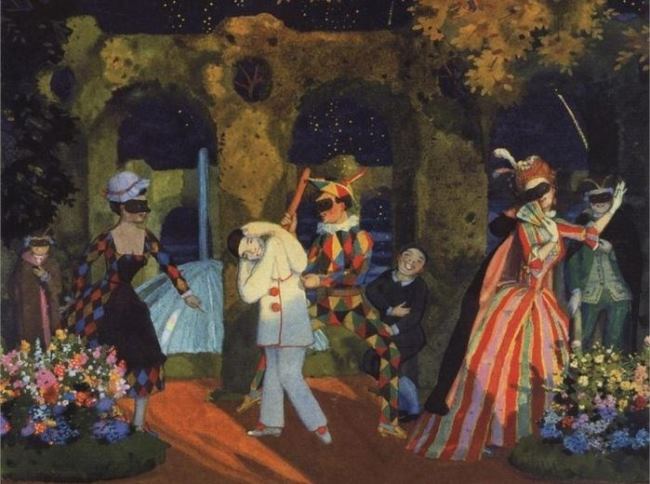 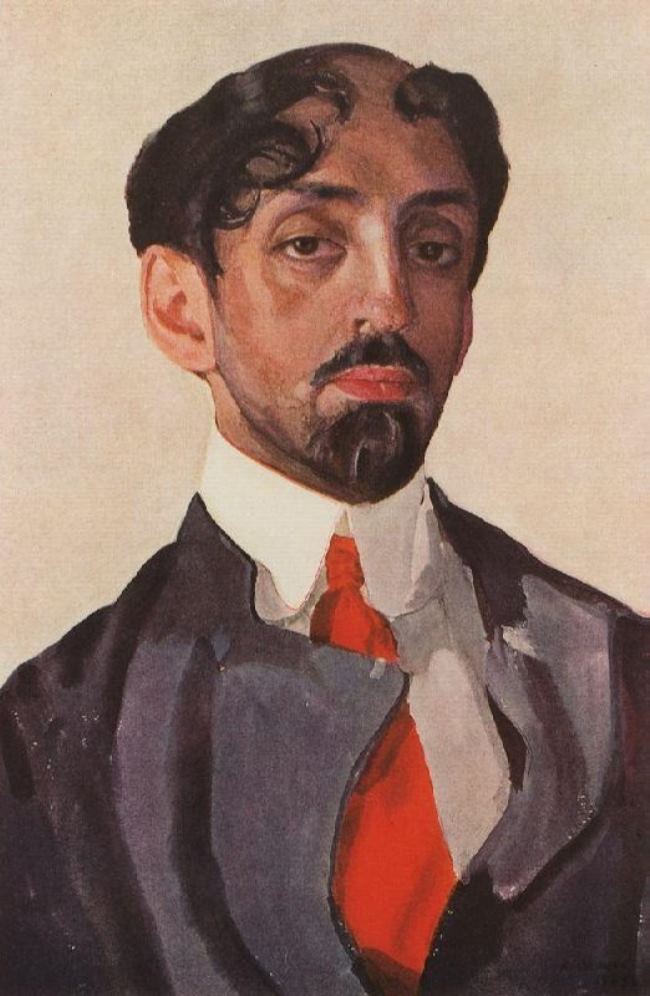 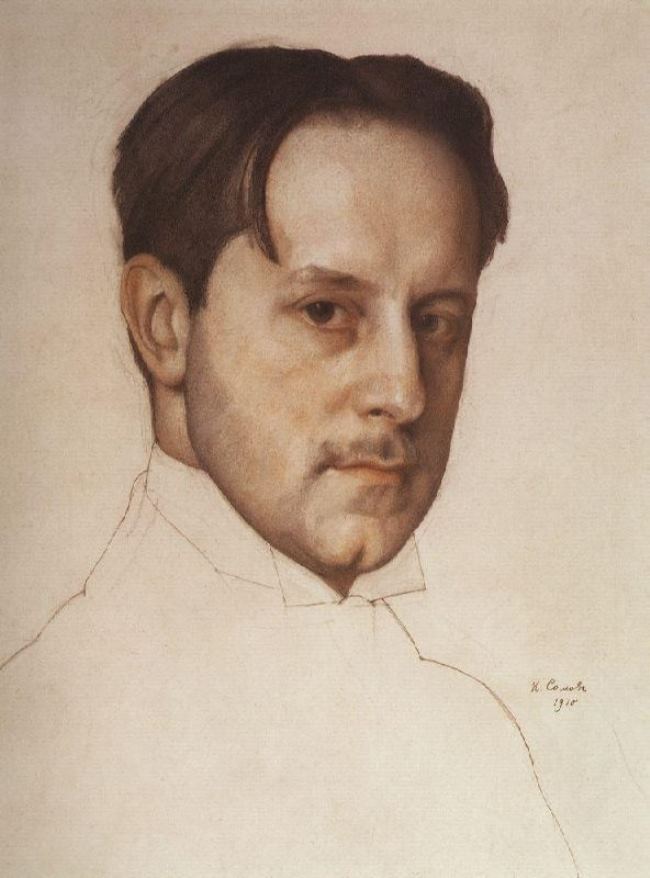 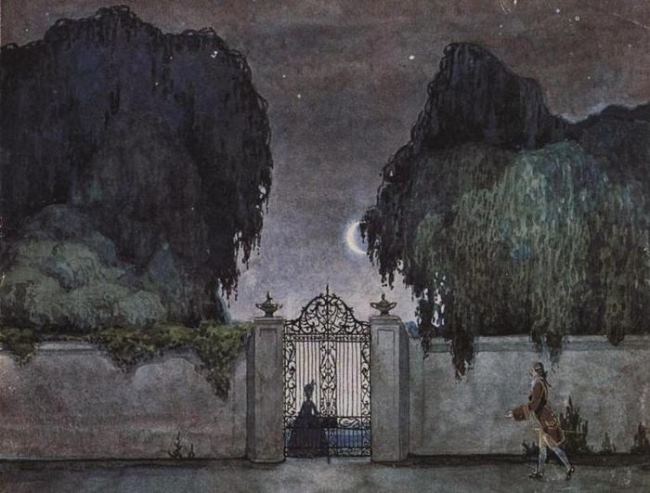 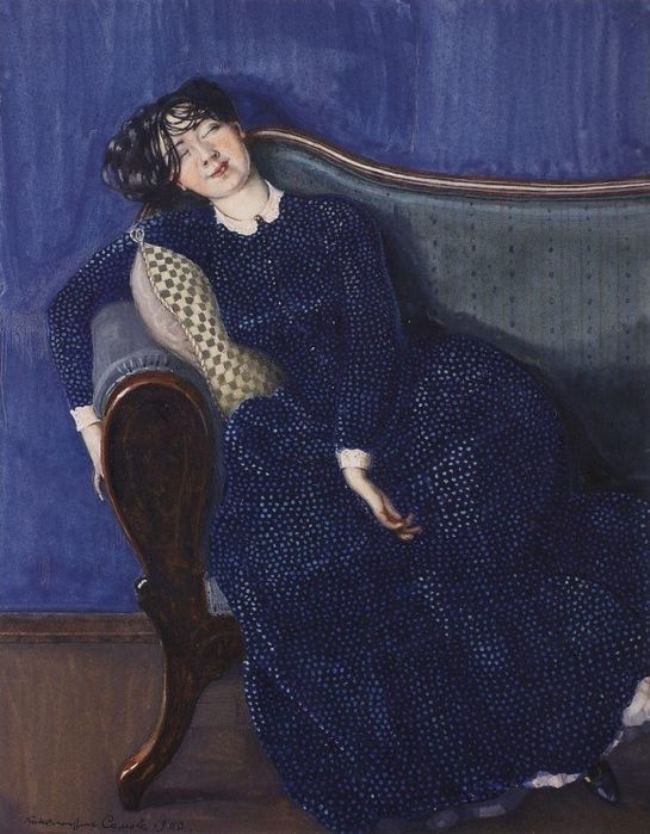 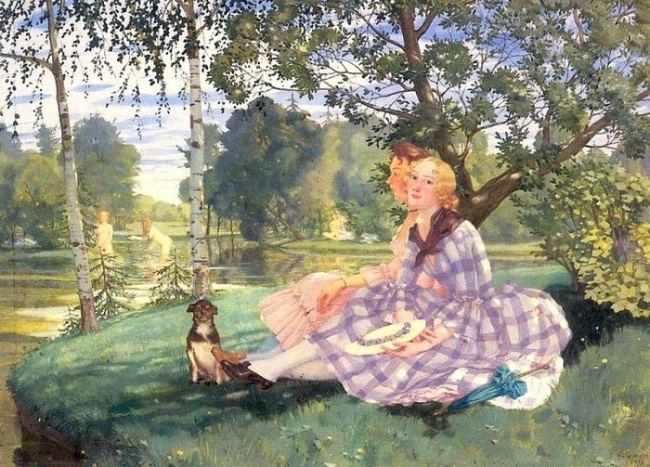 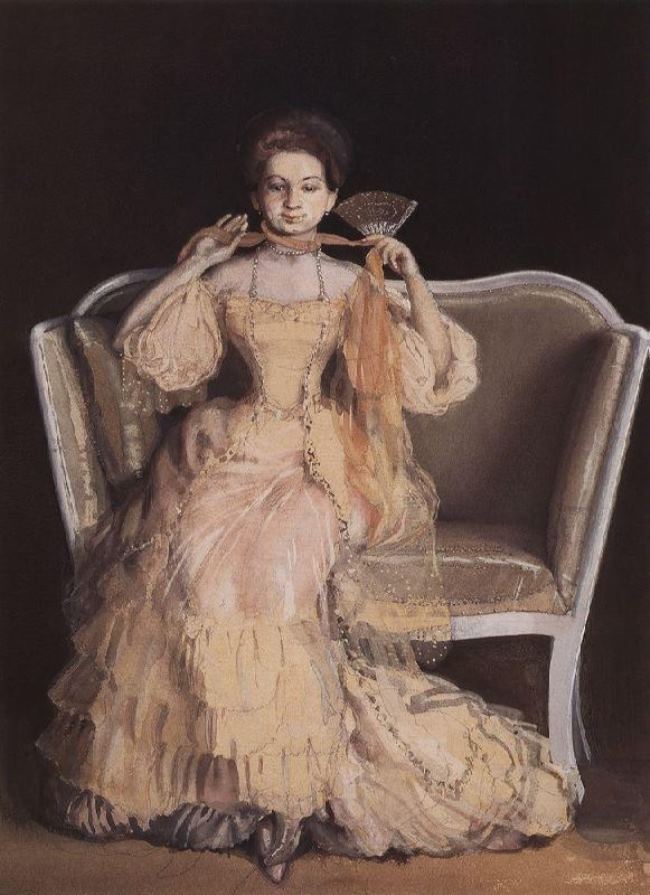 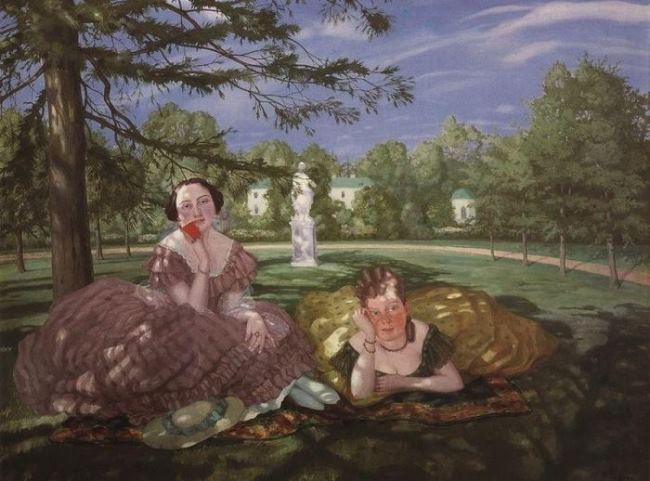