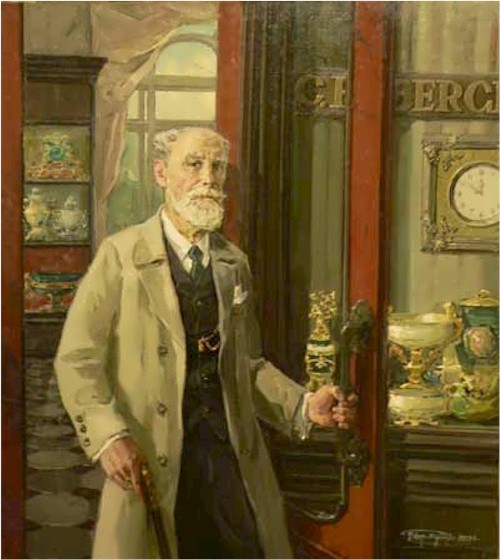 Karl Faberge was a Russian jeweler, best known for the famous Imperial Easter eggs or Faberge eggs, made of precious metals and gemstones. In 1842, Faberge Sr. founded a jewelry company in St. Petersburg.
Karl was born on May 30, 1846 in St. Petersburg, Russia. The boy studied in Dresden, and then Frankfurt master Josef Friedman became his teacher. Later he returned to Russia and at the age of 24 Karl became the head of his father’s company.
In 1882, at the All-Russian Art and Industrial Exhibition in Moscow, his company’s products attracted the attention of Emperor Alexander III. The talented master received the patronage of the royal family and the title of Jeweler of His Imperial Majesty and Jeweler of the Imperial Hermitage.
Faberge was famous in Europe. Many relatives of the imperial family in the UK, Denmark, Greece and Bulgaria received the products as a gift. In 1900, Faberge received the title of Master of the Paris Guild of Jewelers, and was awarded the Order of the Honorary Legion.

In September 1918, Karl illegally left Petrograd and went to Riga. Shortly thereafter, he had to flee further to the West – to Germany. He settled in Berlin, but the revolution also began there. Faberge had to move to Frankfurt am Main, then to Homburg and Wiesbaden, where he finally settled.
You know, Faberge never recovered after the revolutionary events that shook him. In May 1920, he became ill. When his health improved he family moved him to the vicinity of Lake Geneva, known for the healthy climate.
Karl Faberge died on September 24, 1920 in Switzerland.

This museum, the treasure of the Moscow Kremlin, has many valuable items, among which there are ten Faberge eggs. This is the highest number of Faberge eggs in Russian museums. Each Faberge egg has its own name and unique appearance. The oldest egg, Memory of Azov, was made in 1891 for Tsar Alexander III. There is a frigate model inside the Jade egg. Another well-known masterpiece is Trans-Siberian Railway Egg, with the train inside it. The most interesting is the egg made for the 300th anniversary of the Romanov dynasty. There is a Globe with outlines of the Russian Empire inside and the egg is decorated with miniature portraits of the royal family.

Cultural and Historical Foundation The Link of Times by Victor Vekselberg, Moscow

There are five Faberge eggs in the museum. The oldest of them is Egg With Rotating Thumbnail (1896). This egg is made of rock crystal, has 12 miniatures with memorable for the Empress Alexandra Feodorovna places. 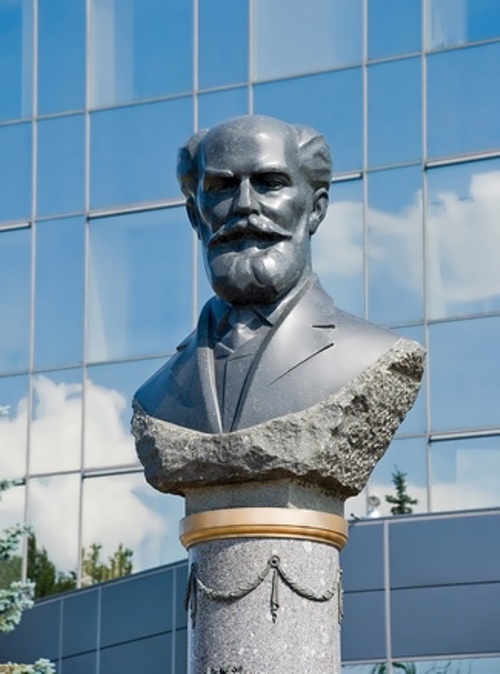 Monument to Carl Faberge in front of a jewelry company in St. Petersburg 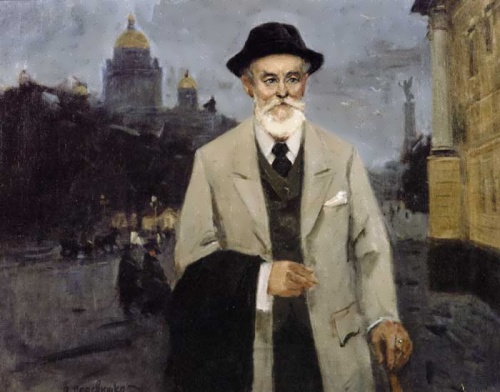 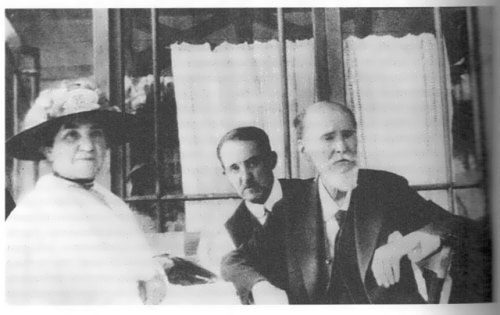 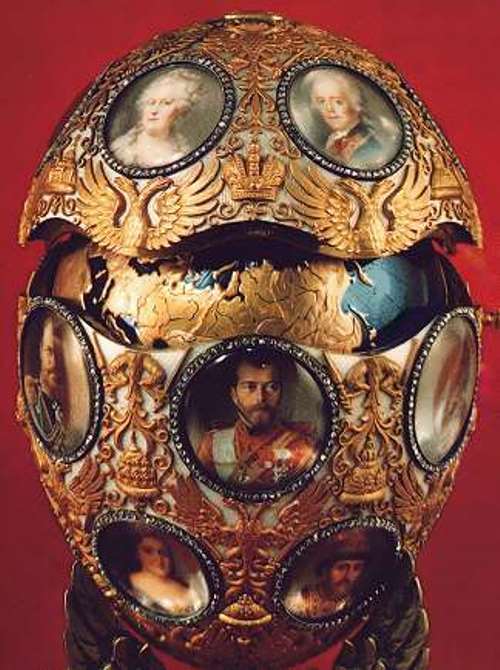 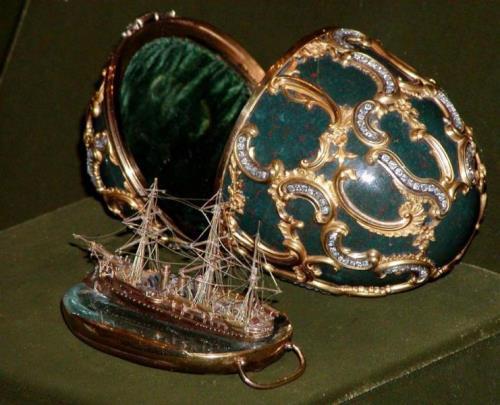 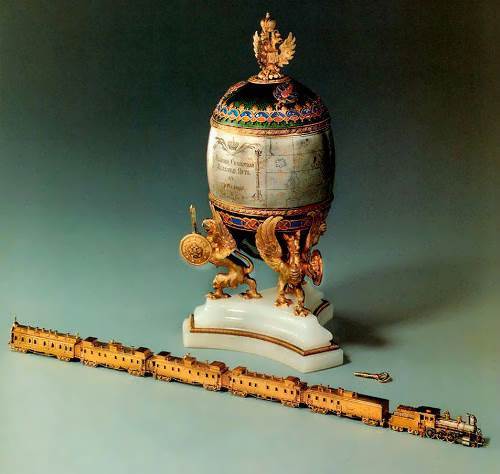 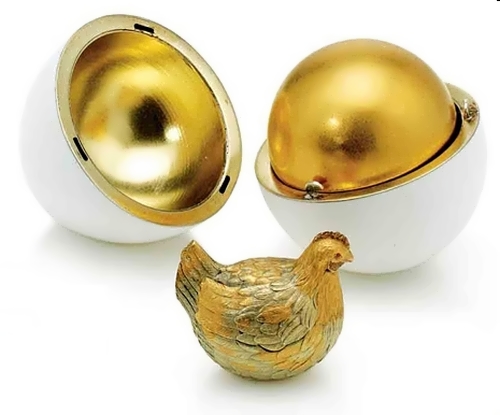 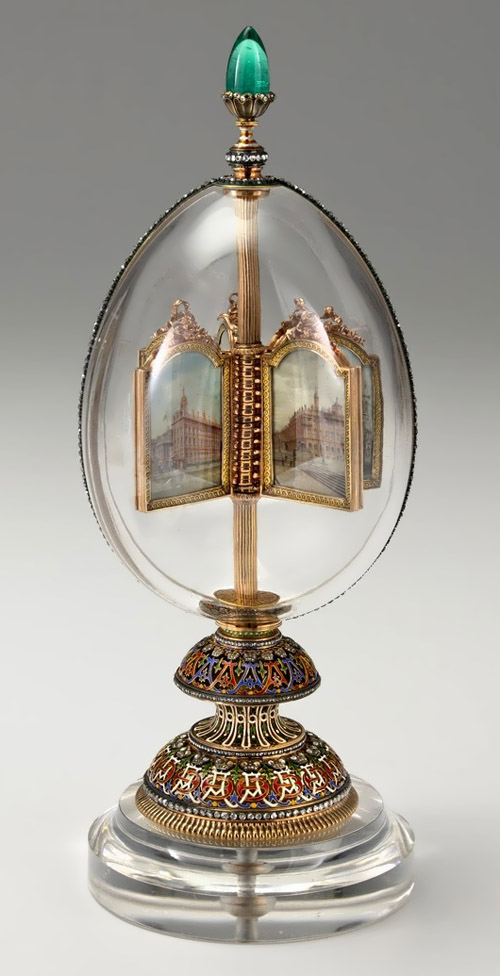 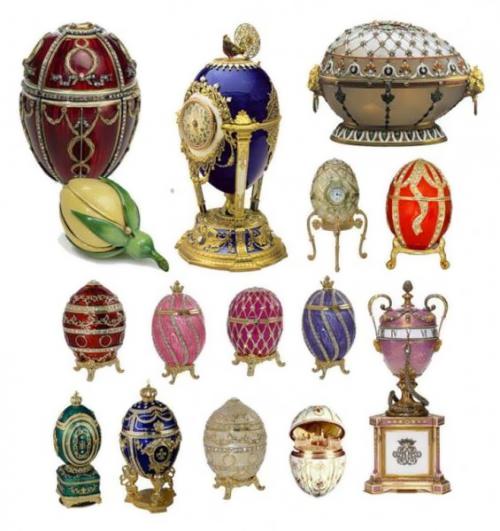 Here are the best works of a great genius.

1. Imperial Coronation Egg is the most expensive Faberge Easter egg, Nicholas II‘s gift to his wife Alexandra. It is made of gold, platinum, diamonds and rubies. 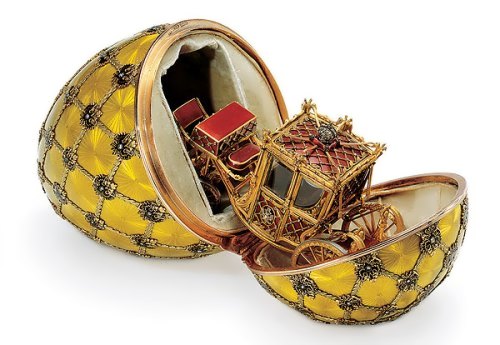 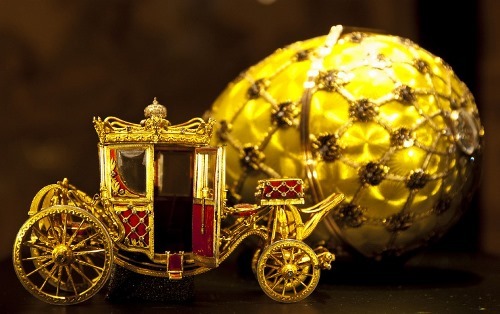 2. Orange Tree Egg is also called the Bay Tree. It was made specially for Nicholas II as an Easter gift for his mother. It is made of diamonds, rubies and jade, as well as pearls and onyx. This work resembles a tree with fruits and flowers. 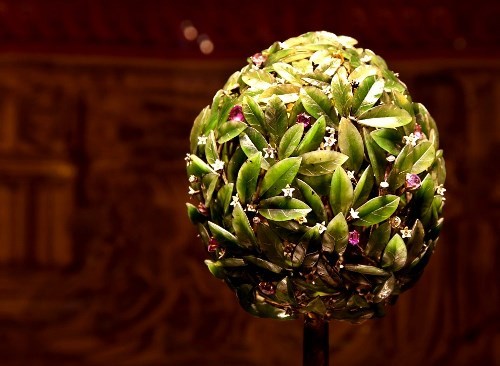 3. Renaissance egg was the last Emperor Alexander’s Easter gift to his wife Marina Fedorova. It is made of enamel of various colors, as well as gold, diamonds and rubies. 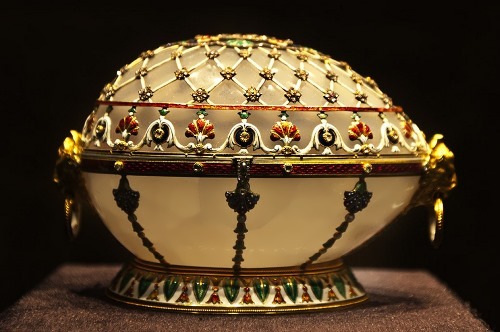 4. Blue Serpent Clock Egg, as the previous one, was Emperor Alexander’s present for his beloved wife. It is made of transparent blue and white enamel with diamonds. 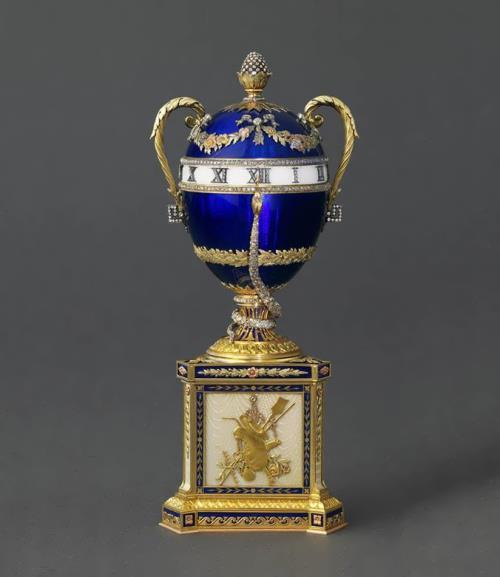 5. Kelekh’s Hen is a composition, which includes the egg, the hen and miniature easel with the portrait of the Crown Prince Alexei. 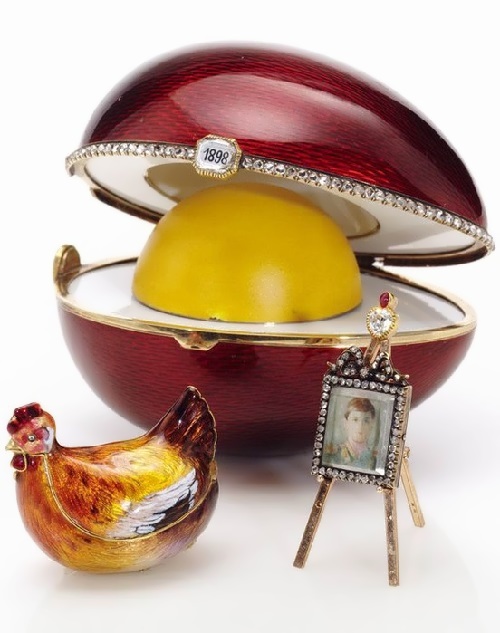 6. Pansy is an egg made by Faberge for the royal family, which Nicholas II presented to his mother. The egg is made of green enamel and the flowers made of gold and jade. 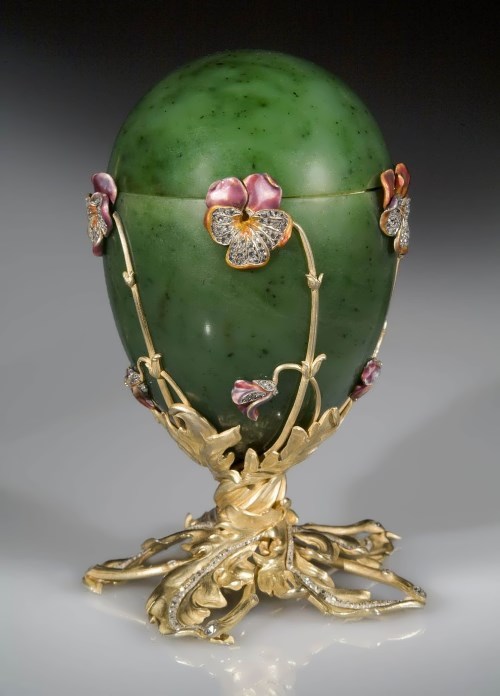 7. Gatchina Palace is an egg with a miniature palace inside. The egg decorated with gold leaves and roses with red lines. 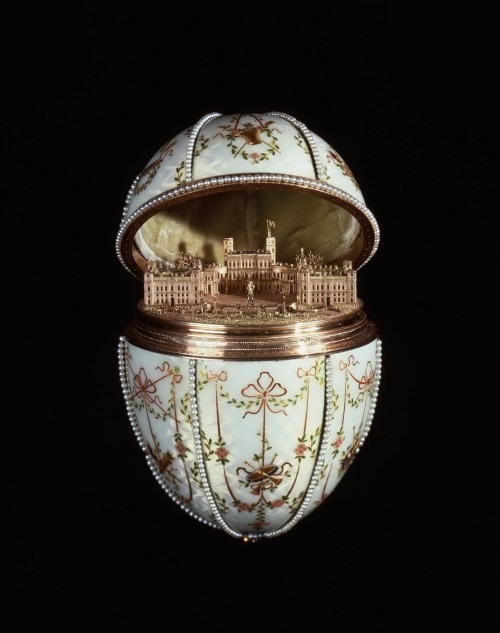 8. Rothschild Egg is one of the most expensive eggs made by Faberge. For a long time the Rothschild family was the owner of the masterpiece. The egg is made of gold, platinum, pearls and pink and white enamel. 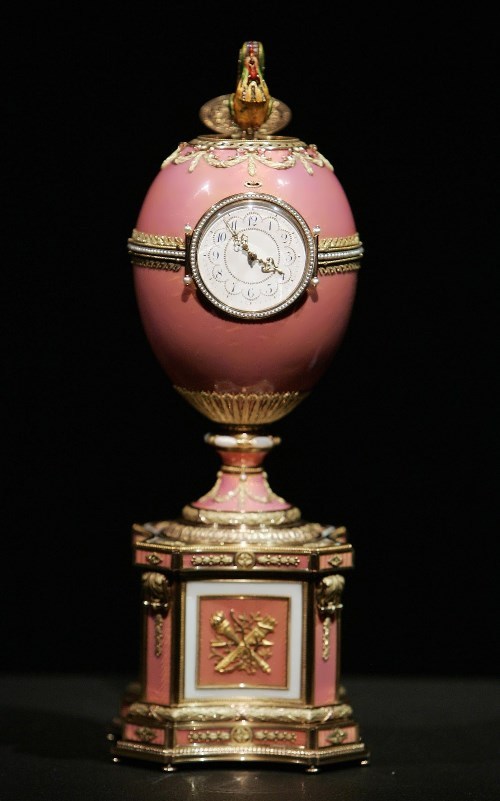 9. Rose Trellis egg is made of gold enamel and diamonds. 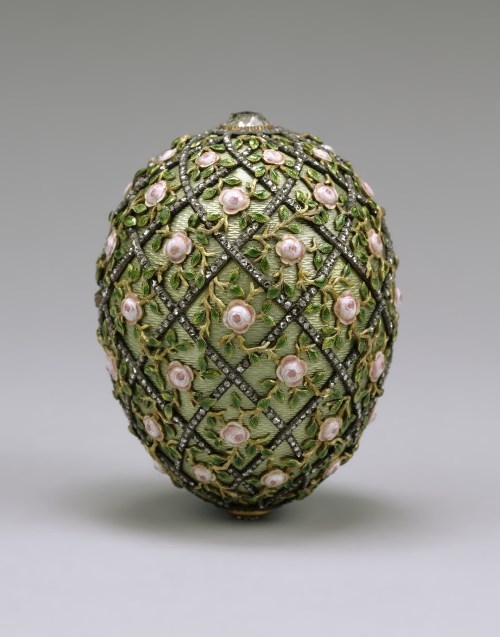 10. Alexander Palace egg was an Easter gift to Alexandra. It is made of gold, diamonds, rock crystal, glass, wood and decorated with portraits of Nicholas II. 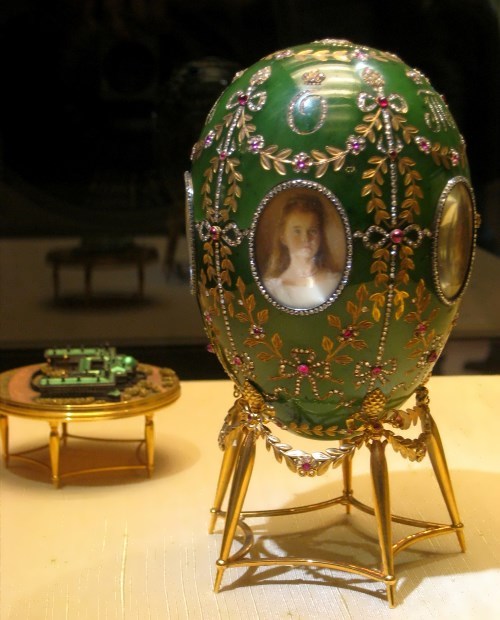 11. Standart Yacht Egg is made of gold and silver, as well as diamonds, pearls and rock crystal. 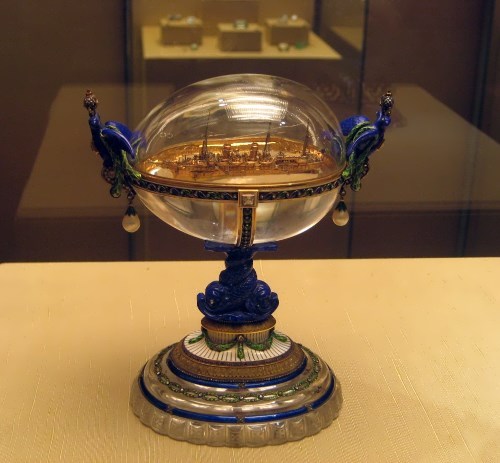 12. Alexander III Equestrian Egg was made as a gift for the Emperor’s mother. It is a transparent egg with a statue inside. 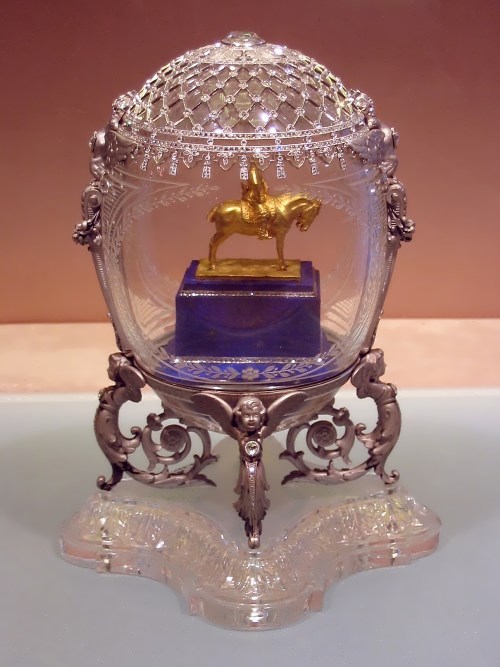 13. Catherine the Great Egg is also called Grisaille Egg, or Pink Cameo Egg. This work is in the Hillwood Museum of the United States. 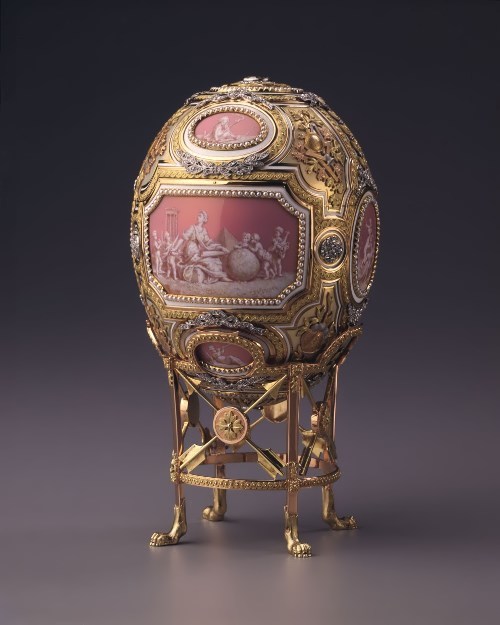 14. Mosaic egg was presented to Alexandra Fyodorvna by Nicholas. The egg is made of almost all the precious stones and metals. It was a surprise for the Empress. 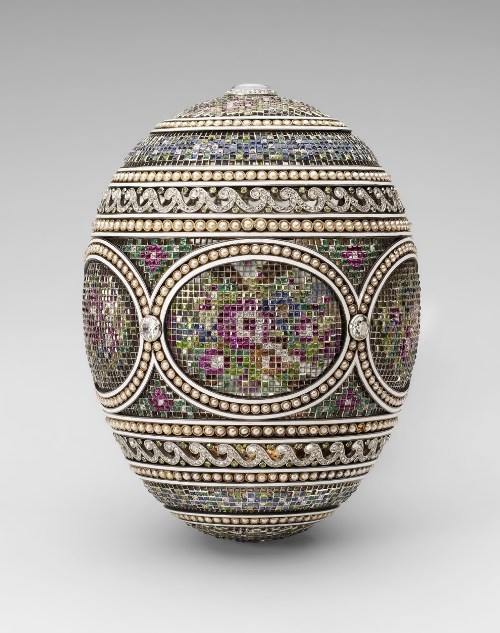